In Jason of Star Command (1978-1980) Chapter 9, “Peepo’s Last Chance,” Dragos (Sid Haig) has repaired his Dragonship and is scouring the universe for signs of Jason.

On Arcturon, Drago’s minions locate a couple of Star Command droids: Peepo and Wiki.  They are there conducting a defense survey of the world, but Dragos orders them captured.

Jason (Craig Littler) and Nicole (Susan O’Hanlon) take a Star Fire to the planet, but in the mean-time
Peepo is connected to a dragon terminal and made to reveal top secret information about Star Command and its technology.

Jason manages to free his friends, but the day is not saved.  Though Jason doesn’t know it, Peepo has been brain-washed and now serves the evil Dragos.

“Peepo’s Last Chance” is not much more than a runaround -- a show with little emotional or narrative depth, concerning instead rescues, escapes, and chases.  In this circumstance, Jason and Nicole must save two diminutive robots, Peepo and Wiki from Dragos. 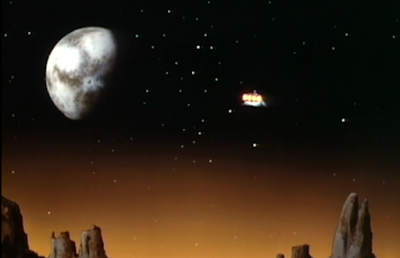 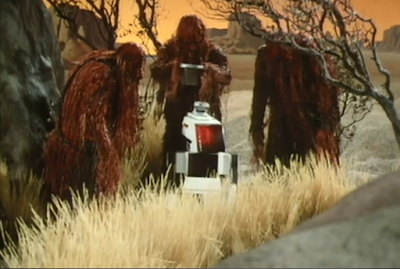 Wiki spends a great deal of time on the top of Peepo’s computerized head this week, and I could not help but think of Twiki and Dr. Theopolis from Buck Rogers in the 25th Century.

But the real antecedents here?

R2-D2 and C3PO, the beloved droid duo from Star Wars (1977).  Here, Peepo considers Wiki an “annoying kid brother,” according to Jason, and that seems like an attempt to recreate the relationship dynamic of the famous gold protocol droid and his mischief-making astromech pal. 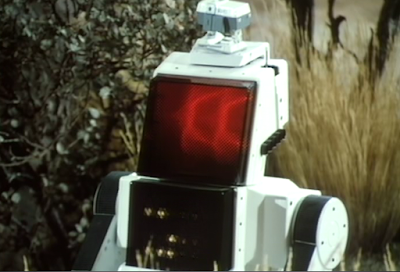 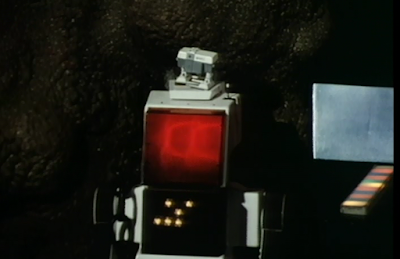 This is the first episode on my re-watch wherein I first felt a sense of creeping sameness or routine.  We’ve seen Dragos’ evil plan before, as well as his capture of Star Command personnel.  We’ve even seen the spaghetti-monster minions and the wasteland planetoid before. And, of course, we’ve seen rescues and escapes galore. 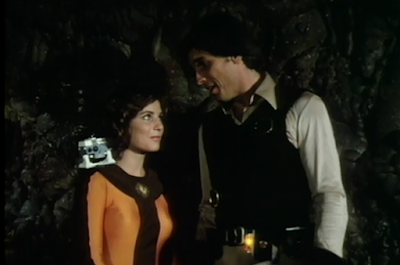 I guess in a large multi-part “serial” like this one, some parts qualify as filler. That’s certainly the case with “Peepo’s Last Chance,” though in fairness the episode does set up, ably, the possibility of future betrayal.  Peepo has been turned!