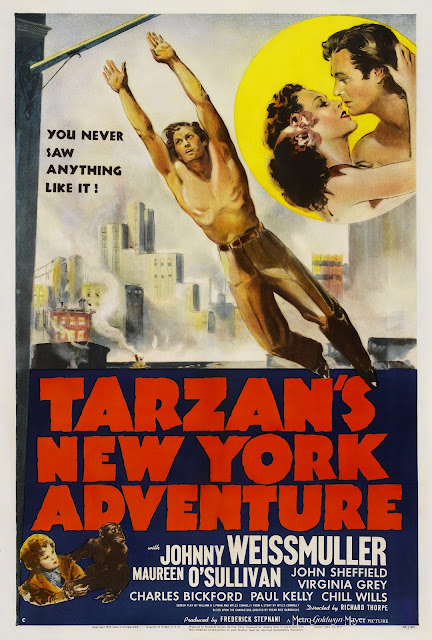 A plane lands in the Great Escarpment with circus employees aboard. They have come to capture lions for their show in New York, but Tarzan (Johnny Weismuller) destroys their guns, and orders them to leave by sun-up the next day.

Boy (John Sheffield) encounters the hunters before they leave, and Buck Rand (Charlie Bickford), circus owner, sees how Boy has trained his elephant wards to perform tricks.  He realizes they would make a great act in the Big Apple.

A tribe of natives attack after Boy saves one white man from a lion, and the interlopers retreat to the plane, taking Boy with them.

Cheetah tells Tarzan what has occurred, and so the Lord of the Jungle and Jane (Maureen O’Sullivan) make plans to get him back, even though it will mean leaving the jungle.

With Cheetah in tow, they make it to New York City, and try to track down Rand and his circus. Jane implores Tarzan to let the law act, but a custody trial goes awry.

Tarzan swings into action in the “stone jungle” to get his boy back. 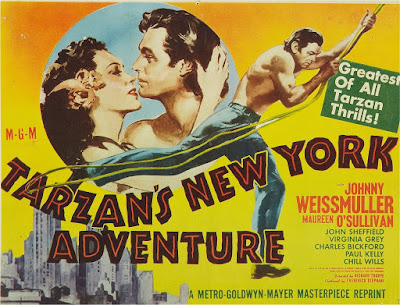 Critics have not been kind to this Tarzan film, the last of the run before a studio switch to RKO.  But I have a different opinion.

Tarzan’s New York Adventure is actually The Voyage Home (1986) of the MGM Tarzan series. The movie is filled with humorous fish-out-of-water scenarios as Tarzan reckons with city life, and the movie features abundant heart and suspense too.

Nothing less than Tarzan’s family is on the line here. But despite this fact, the film includes gag after gag, for both Weismuller's Tarzan and the mischievous Cheetah.

I was not the world’s biggest fan of Tarzan’s Secret Treasure because it seemed content with the status quo, and felt tired.

This movie, by contrast, feels invigorated by the new setting and new situations.

Yes, broadly speaking, we get the same plot we’ve seen before, on numerous occasions.  White capitalists arrive in the jungle and threaten the family with their greed. 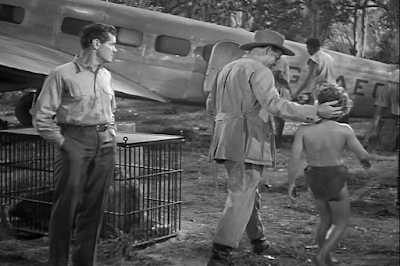 But in this case, Tarzan’s rescue involves a trip into modernity, where he grapples with tailors, lawyers, hat-check girls, opera singers, and policeman.  And when he swings into action, he climbs skyscraper ledges, or dives from the top of the Brooklyn Bridge. 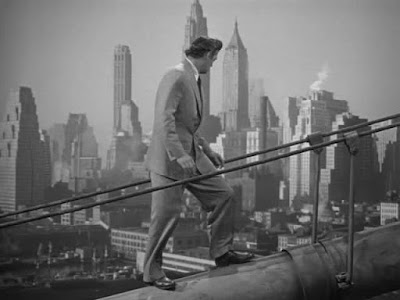 These are all fresh spins on the standing scenarios of the Tarzan franchise, and are a lot of fun.  I particularly lie how Tarzan takes a shower with his clothes on, at one point, and Jane must step in. 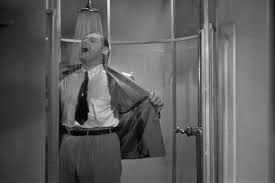 Basically, we learn a lot about Tarzan here by the way he navigates our world, and audiences will feel more affection for the character than ever before.

Also -- it’s impossible not to note it -- but white civilization gets some redemption here, for the first time since we said goodbye to Jane’s father in Tarzan the Ape Man in 1932.

The judge in Tarzan’s case is eminently fair-minded and decent, for example, and so is his lawyer.  One would expect the film’s criticism of the modern age to kick into high gear in this film, but instead the film relies on humorous aside and jibes.  It’s a sweet, amusing movie, never a strident one. 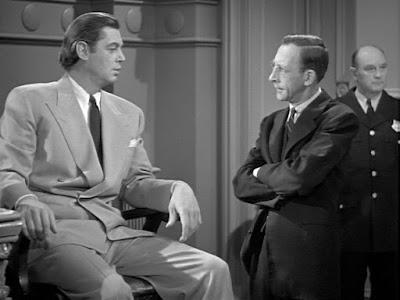 The film’s book-end swimming scenes achieve a lot, with very little.  Tarzan, Boy and Jane start and end the movie by swimming together -- as a family -- in the jungle river.  These moments showcase order, and, finally, the restoration of order.  Also, this is our last view of Weismuller, O’Sullivan and Sheffield in their trademark roles.

I suppose the MGM series could have ended in a variety of ways, but Tarzan’s New York Adventure possesses a fine sense of humor, and a sense of visual distinction that separates it from the other Tarzan films.

Tarzan's New York Adventure stands out in the memory, and is a strong closing chapter to this particular cinematic Camelot.
at June 29, 2016