The Overlord plunges all of Sagar -- including the Sagar Tree -- into permanent winter. The key to keeping spring forever locked away rests in Leelana, a Cloud City that possesses a literal key to the season.

Blackstar takes the key from the princess of the city, but must contend with Crios, an icy warlock who serves as Overlord’s minion.   Mara transforms Blackstar into an ice warrior capable of defeating the wintry troops. 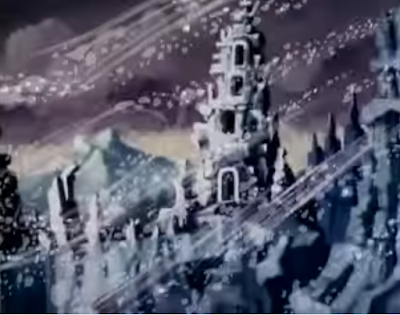 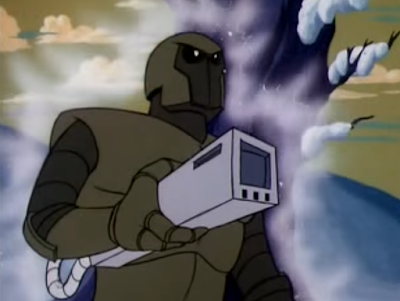 “Lightning City of the Clouds” is another sort of by-the-book, or off-the-shelf episode of Filmation’s Blackstar.  The Overlord hatches an evil scheme, using a distinctive minion (here, one based on ice), and only Blackstar and the star-sword can stop him.

Meanwhile, we get to see another kingdom on Sagar, meet another ruler (in this case a princess and get lots of appropriate wisecracks about the threat of the week.  The bad guy wants to put “Blackstar on ice,” and so forth.  This element of the episode gave me uncomfortable flashbacks of Batman and Robin (1997).

One can see how ideas on the series are starting to repeat, too. This week it’s Eternal Winter. Next week (in “Kingdom of Neptul”) it’s eternal rain.

Of course, this is a series for children, but the storytelling is all superficial, and geared towards gimmicks.  Ice Warlocks, cloud cities, even Blackstar’s transformation, in the finale, into an ice warrior. 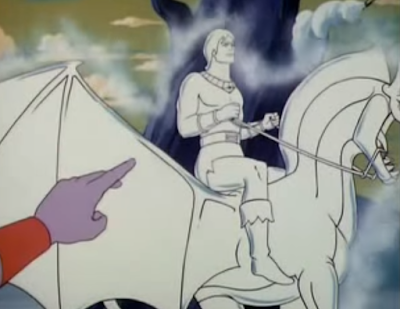 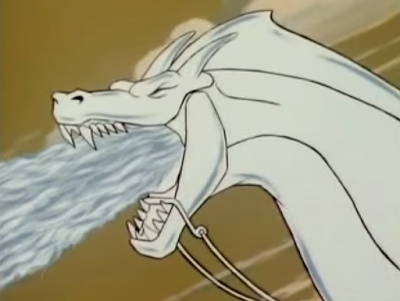 There’s nothing deep or consequential about the characters or their nature here, just a villainous plan to be stopped. As a child, this is fine, but on a re-watch, it feels shallow.

A similar show, Thundarr the Barbarian (1980) featured an added (and adult…) layer of storytelling because of the post apocalyptic setting.  The interest for the adult was in seeing how the “new” world of magic was built on the ruins -- literally -- of our current world of science and technology. Blackstar possesses no such organizing principle, and vacillates between not-that-inspiring action-fantasy and lame humor (usually featuring the trobbits).