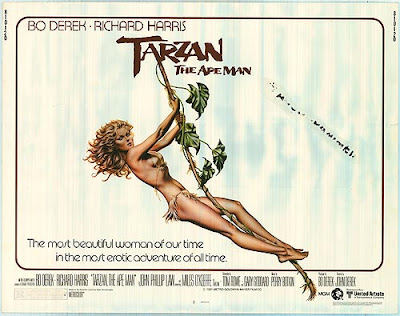 "We're here for your pleasure. Not ours," states Bo Derek (as prim and proper Jane Parker), in her husband (John Derek's) sexual-skewing interpretation of the Tarzan mythos, Tarzan the Ape Man (1981).

Naturally, she's talking about the reasons why women are put on this Earth (for men's pleasure; not their own...), but she might as well be discussing the reasons this film looks the way it does.

Tarzan the Ape Man was produced -- seemingly -- entirely for male consumption and pleasure. After all, the film is a lingering, loving tribute not to Edgar Rice Burroughs' seemingly immortal jungle man character, but to Derek's legendary and statuesque, perfectly-sculpted body and her character's tantalizing sense of sexual "innocence." 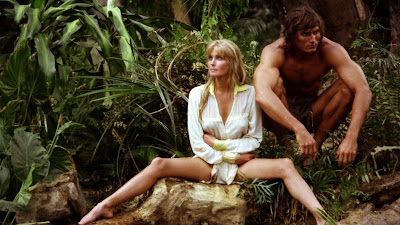 I realize the purists -- and just about everybody else, too -- hated Tarzan the Ape Man when it was released back in the early 1980s, but perhaps it is not as far off the mark as many have insisted.  If one considers the sexual allure of Maureen O’Sullivan, in Tarzan and his Mate (1934), for instance, one could see this film as honoring, perhaps, that heritage.

The basic idea of this "re-imagination" is a depiction of the Tarzan story re-framed and re-parsed from Jane's naive perspective; and as a sort of soft-core travelogue across gorgeous, picturesque, wild Africa.

Accordingly, the film's photography (of both naked bodies and exterior locations...) is never less than beautiful (some might say stunning), and there's no studio fakery to break the illusion of a sojourn into the bush, so-to-speak.

In terms of bad movie history, the torch of bad-actors starring in soft-porn genre films is passed from John Phillip Law (Barbarella), here playing a photographer named Holt (Neil Hamilton’s character in 1932 and 1934), to chiseled Miles O'Keeffe, portraying Tarzan. That baton-passing alone is a cinematic milestone, I'd estimate.

Richard Harris (who also starred with Bo Derek in Orca back in the disco decade), plays Jane's father in this version of Tarzan, and he takes his performance way over-the-top. Mr. James Parker is a central character in the screenplay, however, which concerns Jane's journey of self-discovery. Yes, she must select one of the two Alpha males in her life: either bad old Dad or hunky, heroic Tarzan.

Since this battle of the -- ahem -- larger-than-life men is the crucible of the narrative, both male characters are depicted by director John Derek in - how shall I say this? -- phallic terms.

For instance, Mr. Parker informs Jane that her mother almost died "during conception."

You read that right. Not child-birth, mind you, but conception. That means...in the act of love-making.

"I held her too long; I loved her too hard," he explains regretfully, providing way too much information about a scene I don't want to envision.

Later, Holt (a milquetoast) explains to Jane that it takes a very "big" (!) man -- her father -- to go into wild Africa in search of a mythical inland sea, which is tucked secretly away behind a giant stone protrusion in the land, an outcropping of insurmountable rock that Bo and the others must scale.

Uh oh. A big man to climb towering outcroppings of rock hard stone.  Got it.

Finally, there's an absolutely incredible, shameless, downright brazen composition in which Harris is seen to be polishing a large chrome cannon (placed in the frame around his crotch level).

The cannon, not surprisingly, is pointed due north.

When Bo Derek approaches Harris and his gleaming cannon, she arrives from the submissive position in the frame, from below...studying the shining cannon wide-eyed...

Even Richard Harris (who regrettably plays his first scene without pants...) and his silver cannon, however, can't compete with Tarzan in the phallus department. The Ape Man (always wearing a tiny loin cloth...) reveals his worthiness by freeing Bo not just from another phallic symbol -- a gigantic boa constrictor -- but by rescuing her from a deflowering at the --errh-- hand of a savage local who had planned to make Jane his bride.

The set-pieces in Tarzan The Ape Man are not really what you would expect of a Tarzan movie; confirming the fact that this movie is really about sex, not adventure. The few action sequences are filmed in agonizing slow-motion and look more like coitus than combat.

Take the snake scene: it's an over-long montage in slow-motion photography, with close-ups of Bo and Miles writhing, gasping and twisting in muddy water. Foreplay never looked so great. But it takes too long...you want to get to the main event. 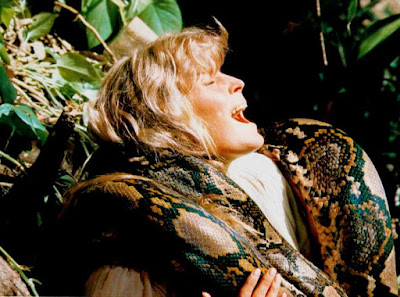 There's also an incredible scene in the middle of the film, one set at an "inland ocean" in which Jane decides - out of the blue -- to take a bath.

We are then treated to a lingering scene of Bo Derek swimming in a shiny blue sea; the waves lapping against her flesh. She poses in the sand, her clothes clinging transparently to her flesh. It's quite intoxicating...until a wandering lion shows up.

Tarzan shows up too, and a love story (of sorts) commences.

Harris, who actually gets to voice a line of dialogue I've always wanted to say to my wife ("I wallow in me. I enjoy every syllable I say."), soon confronts daughter Jane over her new interest in the hunky ape man. "Do you understand what he wants?" He asks.

Yeah Dad, I think she understands.

Later, Tarzan abducts Jane and one of his chimpanzee entourage tosses her a banana at a well-timed moment. Clutching the banana close to her mouth, doe-eyed Jane says "I'm still a virgin."

Later in a film that feels like all promises and no delivery, Jane teaches Tarzan to smile. She puts her fingers to his lips. He responds in kind. Then, as if he was born to it, Tarzan reaches quickly under Jane's (see-through) shirt and begins to vigorously massage her breasts. Wow. 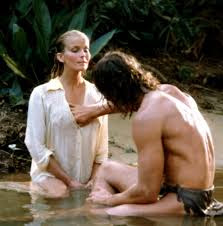 The film climaxes (if you'll pardon my choice of phrase), with Bo Derek topless again, covered head-to-toe in glistening white paint; rescued in the nick of time by Tarzan from the aforementioned "savage." As for poor Daddy, he's finally undone by the King of Phallic Symbols: gored by an elephant tusk. 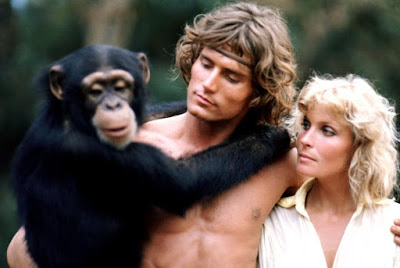 As he dies, he continues to blabber endlessly. "Your life is going to be a marvelous adventure," old Dad says to his daughter, just as she is about go off and be deflowered by Tarzan.

Email ThisBlogThis!Share to TwitterShare to FacebookShare to Pinterest
Labels: Tarzan, Tarzan Week, The Films of 1981