(Re-Posted from Earlier in the Week)

In the Monsters (1988 – 1991) episode “The Hole,” three soldiers in the Vietnam War, led by Sgt. Kenner (Ahmad Rashad) probe deep into the ground, into an unexplored Vietcong tunnel system.

As they tread deeper and deeper into the Earth, into the network of tunnels, Corporal Torres (Antone Pagan) leaves shot-gun shells in the cave walls as bread-crumbs to chart the way out of the confusing labyrinth.

At the bottom of the tunnel system, however, the trio discovers a Viet Cong headquarters, and is surprised to see guns, ammo and sensitive intelligence documents left behind. A dying Viet Cong soldier is also there, and he offers the Americans a grave warning.

When this tunnel was dug, its builders went “too deep” and awoke something in the Earth.

The Viet Cong also buried their dead in the dirt walls, and the dying soldier warns that they are coming back to life to kill the living, and that “the Earth might be avenging all the blood spilled upon it.”

Afraid that they are “crawling through a cemetery,” Torres suggest they leave at once. Kenner agrees and the trio retreats, only to find that there is no way out of the tunnel; that it wraps around itself again, and again, with no end and no beginning, no top and no bottom.  The Earth has swallowed them whole.

Worse, skeletons are coming out of the walls, hungry for the flesh of the living… 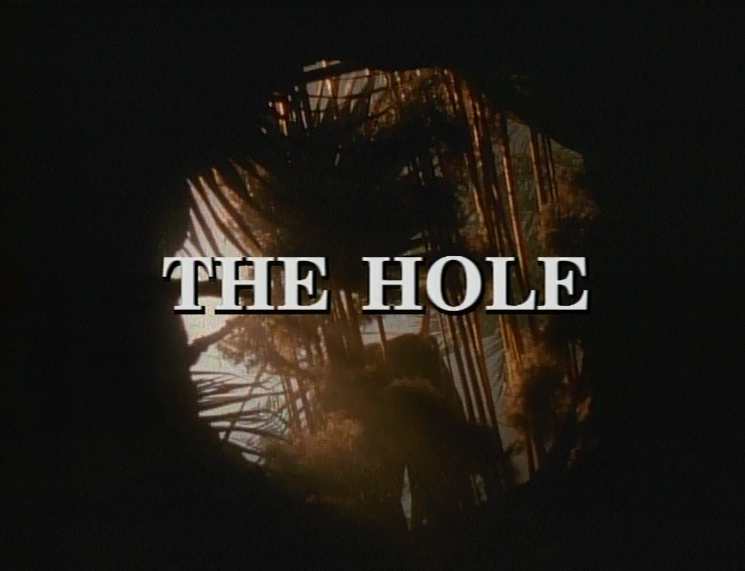 Monsters, a 1980s horror anthology, features some great, chilling horror stories, but one of the darkest and most unforgettable of the catalog is “The Hole,” a third-season entry.

The late 1980s and early 1990s was a time in the pop culture when America was trying to exorcise the ghosts of the Vietnam War.

Instead, these films examined, in three dimensional fashion, America’s involvement (and behavior) in the controversial conflict.

“The Hole,” like many of those films, is strongly anti-war in general. Here, soldiers blunder into a man-made cave that has tread too deeply upon the Earth, and the Earth responds angrily by trapping and killing them there.  Corpses burst out of the cave-walls, re-animated, and on the war-path. 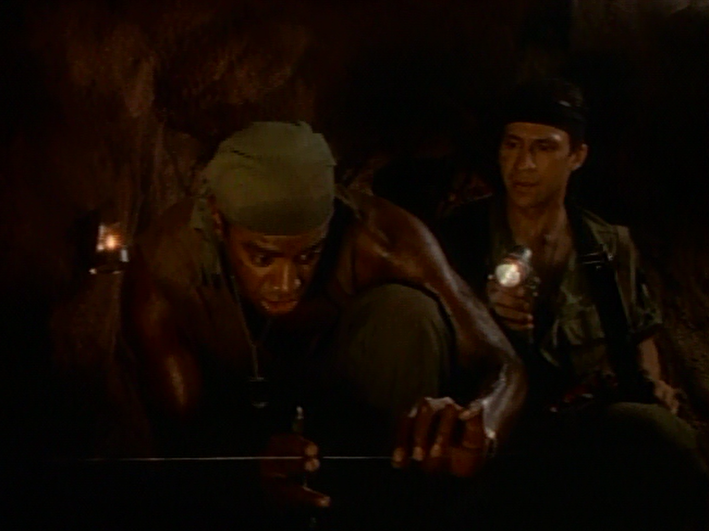 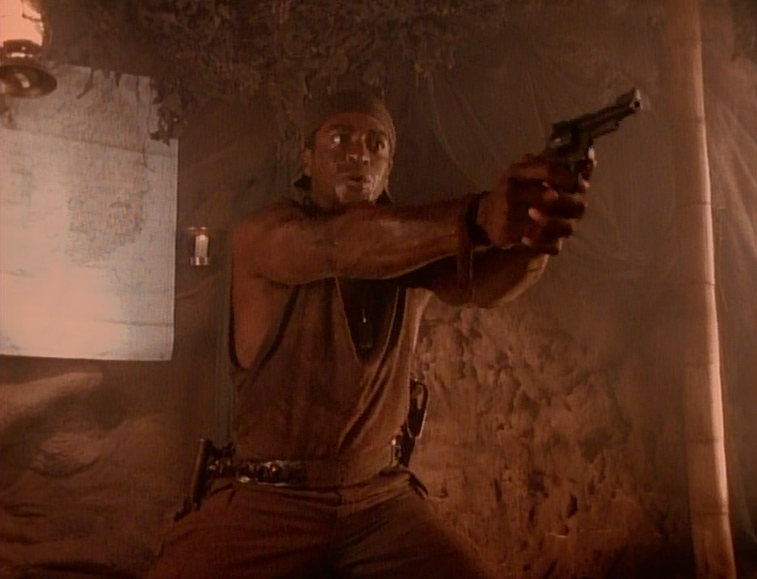 The cave, or cave entity, importantly, does not distinguish between Viet Cong or Americans.

Human blood is human blood, the episode suggests, regardless of nationality. The Earth is angry about all the death that has taken place on its soil, and isn’t out to parse politics or take sides in a petty conflict of man’s making (and over man’s ideologies).  The idea here, is that nature doesn’t separate us into “tribes” (like American, or Vietnamese, capitalist or communist), but instead sees us as being all of the same group.

When man goes to war against his own kind, the episode suggests subtly, he is falling into a hole where there is no escape, and, ultimately, no winner. 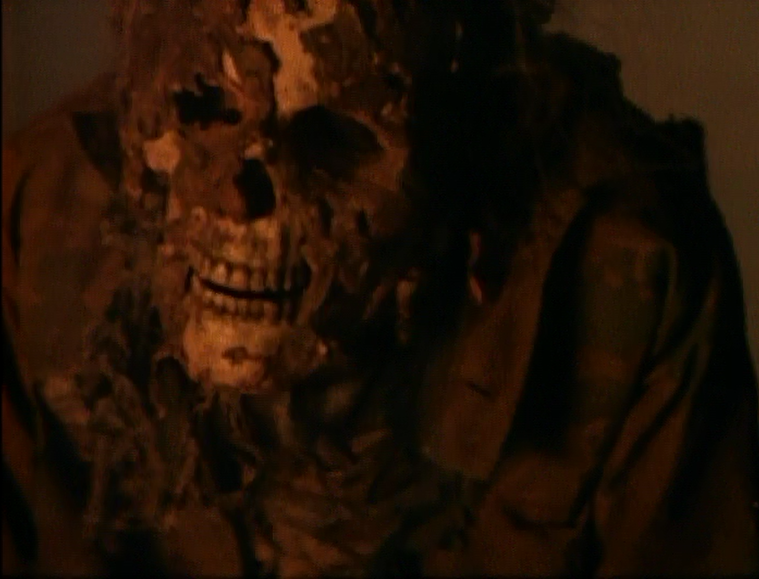 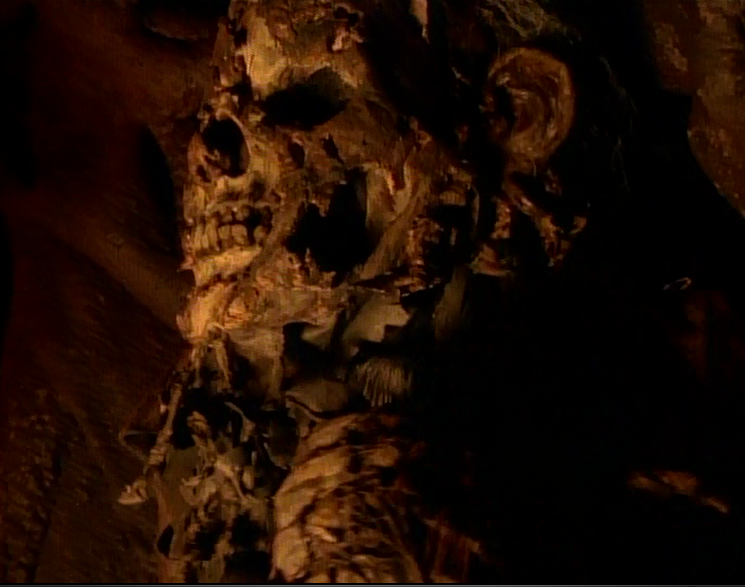 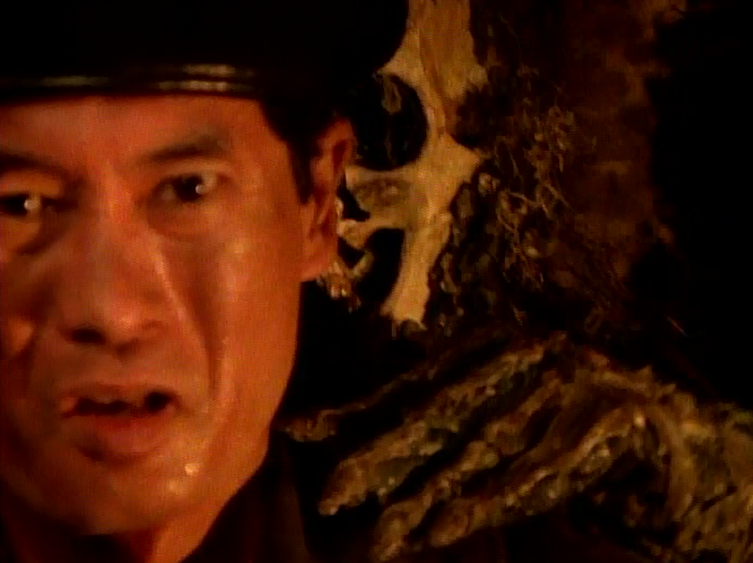 What makes “The Hole” so frightening, in part, is the claustrophobic setting. The entirety of the episode is set in the extremely-tight cave system, which is so narrow  that the soldiers can’t even stand up straight at points.  Only twice -- at book-end points; at the beginning and ending of the episode -- are we afforded a peek at the outside world.

By keeping the soldiers trapped in these tight, dimly-lit tunnels, the director of the story gives us, like Corporal Torres, a bad case of “tunnelitis.”

The fear at work here is not only of being lost, but of being buried alive. These soldiers are the walking dead, in their graves, they just don’t realize it yet.  Indeed, there’s a good argument to be made that this tunnel is Hell itself, a place of endless torment, with no escape, and no exit.

The kicker is the episode’s final scene, which sees heroic but desperate Sgt. Kenner scrambling to dig a tunnel up through the cave roof to the surface.  He finally succeeds, but when he lifts himself up through the hole, he promptly finds himself back at the bottom of the tunnel, climbing up into the lowest floor. 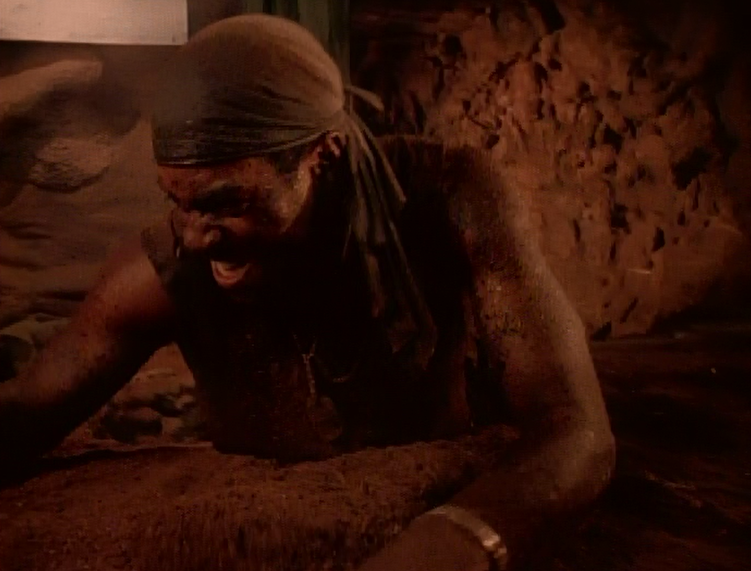 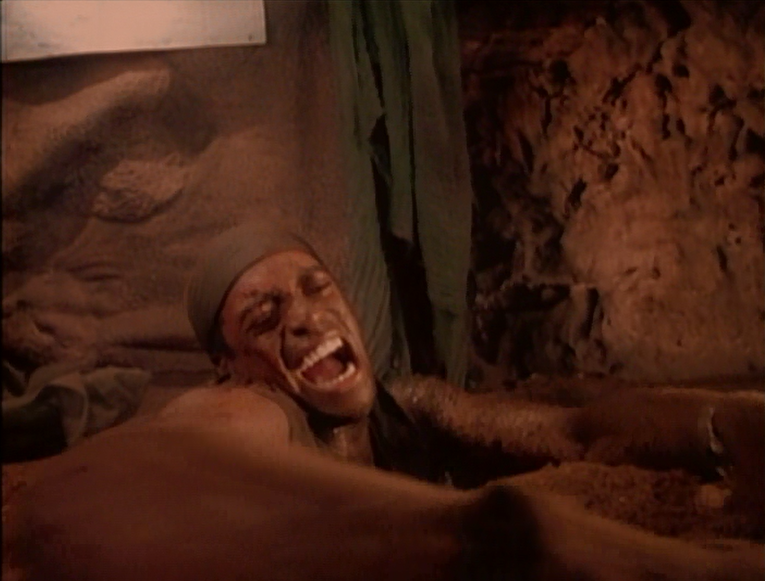 This is the very stuff of nightmares.

“The Hole” ends on a down-note, which seems appropriate given the story’s themes. All those who have fought in this war, and spilled blood upon the Earth for man’s petty causes have “transgressed,” and when they wander into this cave, Nature shall have them.

Surreal and circular, “The Hole” is a throat-tightening descent into terror, and one of the most accomplished and horrifying of all Monsters episodes.
at October 31, 2014

Email ThisBlogThis!Share to TwitterShare to FacebookShare to Pinterest
Labels: 1980s, From the Archive, Monsters