My latest article at Flashbak tallies the five greatest death scenes of the Nightmare on Elm Street saga.

Here's the snippet and url: (http://flashbak.com/freddy-slays-em-the-5-greatest-death-scenes-in-the-nightmare-on-elm-street-film-series-22077/) 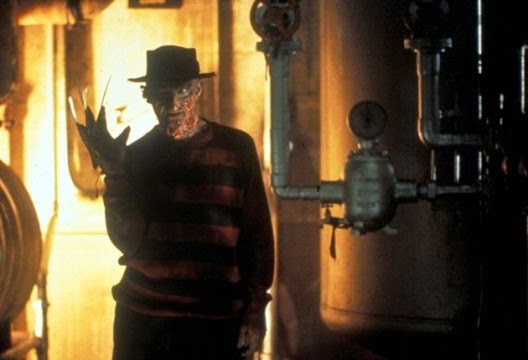 Beginning in 1984, the Nightmare on Elm Street films ruled the box office, and the horror genre too. Wes Craven created a timeless demon in crone-like Freddy Krueger (Robert Englund), the ultimate “bad father” and a bogeyman who would visit the sins of the fathers upon the children.  The original film series stretched from 1984 to 1991, and Wes Craven himself re-booted the monster with a darker tint in 1994’s New Nightmare.

Freddy was and remains terrifying for many reasons.  First and foremost, Freddy was in total command of the dream world, a realm that we all have to visit sooner or later, lest we lose our minds.  None of us can avoid sleep for long.

But Freddy was also scary because he served as a reflection of that universal quality of teen angst, from drug use in the “just say no” Reagan years, to body image worries and anxieties about eating disorders.

The key to Freddy’s particular brand of horror was that he was -- after a fashion -- a kind of nasty therapist, forcing his victims to face their deepest insecurities before, finally, murdering them in terrible fashion.  Whatever psychological foible Freddy found in those whose dreams he stalked, he ruthlessly and colorfully exploited. And the special effects masters brought those phantasms to vivid, incredible life.

Freddy did not play favorites, either, or act in a politically-correct fashion. His best kills in the series are those that, to some extent, contend with topics that the mainstream culture simply didn’t want to discuss either then or now.

Kill a kid in a wheelchair?  Check.

In short, Freddy never feared to go to the dark places of the psyche, and the five best “kills” in the series reflect that key aspect of the franchise...."
at October 10, 2014