In “Eye of the Beholder,” a blind woman, Allie Kingston, arrives on New Texas with the hope that the mineral Kerium might be utilized to help blind children on man worlds see again.

Allie oversees the processing and preparation of Kerium for off-planet transport, but Tex Hex interferes, and wants the Kerium for himself.  After one of his plans fails, Allie and Tex Hex meet face-to-face.  But because of her handicap, Allie doesn’t know that she is dealing with a hardened criminal.  She senses that he is a “stranger…a loner,” but not a monster.

Instead, Tex-Hex shows Allie kindness, and recalls how he lost the love of his life over the choices he has made. Allie assures him he is not really evil, but for Tex Hex it may just be too late to change. 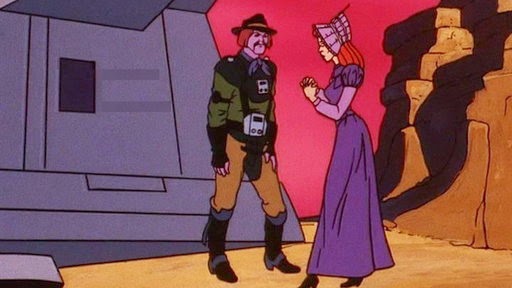 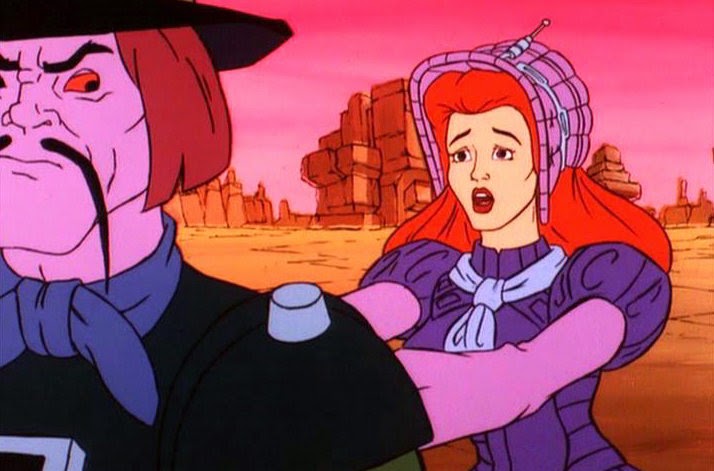 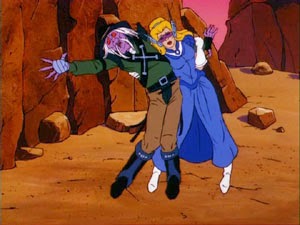 Sympathy for the devil?

This episode of BraveStarr is a most welcome entry in the series because it adds some meat to Tex Hex’s skinny bones.  Thus far in the Filmation series, he has served as a kind of transparent Skeletor stand-in, always putting up an evil plan, always getting quashed by his nemesis, in this case, BraveStarr.  He has always seemed evil, well, just because…he’s evil.

But in “Eye of the Beholder,” a blind woman, Allie, learns about Tex Hex, and more than that, Tex Hex opens up about himself.  We see flashbacks from his past, including his failed relationship with another woman. The episode ends with Tex Hex watching Allie leave the planet, in silence.  There is no guarantee that he will change, but suddenly we feel a human connection to him that other episodes have lacked.

The much-appreciated message, even if not terribly subtle, is that there is good in everybody.  And more than that, people can change, both for the worse and for the better.  Tex Hex became what he is -- a thief and a bandit -- because of his choices. If he made better choices, he could change again.

So many cartoon series of the 1970s and 1980s deal in absolutes, and in two-dimensions, good and evil.  BraveStarr features its share of those episodes for certain, but “Eye of the Beholder” is a nice change, and one that indicates a willingness on the part of the writers to explore their world, and even the villains of that world.

The message at the end of the episode this week concerns treating people with disabilities fairly, tying into Allie’s blindness.  That’s a worthy cause, but it might have been better for the episode to comment on Tex Hex, and the idea that it is always good to have empathy or people, even people who you don’t judge as good.  For with empathy, comes understanding.