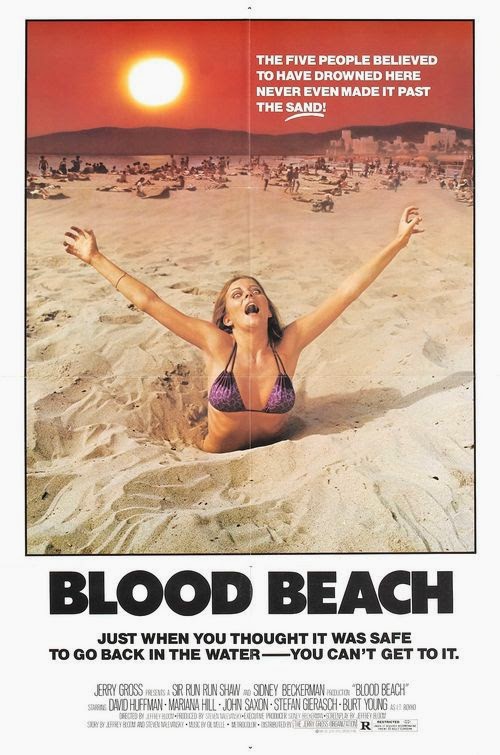 I was just ten years old when Blood Beach (1980) arrived in theaters.  I didn't get to see the low-budget horror film -- my parents wisely wouldn't let me -- but the trailer scared me to death:

Okay, so today the trailer looks cheesy and kind of funny, and it makes the film look quirky and appealing instead of all that scary.

But as a kid, the possibility of this particular "living nightmare" really terrified me.

At about the 1:40 point, for instance, a woman walking across a picturesque beach at night gets dragged down to her death....by some "horrible thing...under the beach."

The unlucky woman can see a man inside a house ahead, and she calls for help, but he's on the phone and doesn't notice her.  Instead, she gets dragged down, beneath the surface by something monstrous but unseen.

There's just something about that image that terrified my young mind.  Every time this commercial played on TV -- and it played a lot -- I sat and watched it, rapt.  I remember, actually, going to sleep at night sometimes and re-playing the commercial in my head. I wondered what kind of terrible monster could be dragging people down through the sand to their death.

The funny thing is that Blood Beach is a really terrible movie, and that if I had seen the whole thing -- instead of being left to my own imagination -- I probably wouldn't have been frightened of the imagery at all.
The movie's only ingenuity seems to arrive in its funny re-purposing of The Jaws II ad-line: "Just when you thought it was safe to go back in the water..."