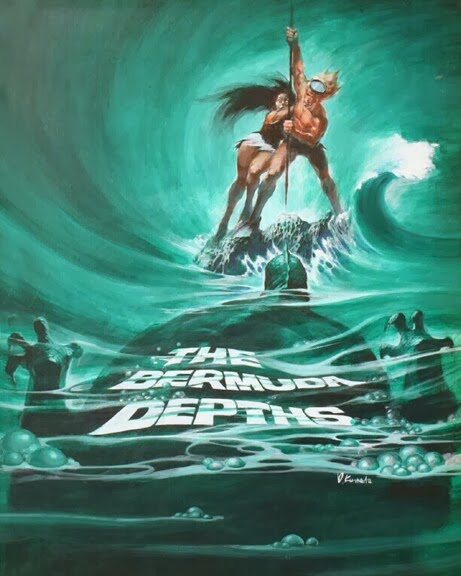 You had to be there.

You just simply had to be there.

It’s a cliché, but that’s about the best way a viewer today can begin to understand the dreamy-slowly-veering-into-nightmare vibe of The Bermuda Depths (1978) and its strange (but widely described) impact on those viewers who happened to catch it on TV during its original broadcast.

Today, gazing at the film with a cold clinical eye, this Rankin-Bass Production from the disco decade features painfully dated special visual effects from Tsubaraya Studios, and plays as meandering and, well, downright weird.

But in terms of comprehending fully a work of art, context is everything, and so perhaps the best way to understand this TV-movie is to consider The Bermuda Depths the unholy love child of the 1970s’ fascination with The Bermuda Triangle, and the Jaws Mania that swept the nation after the success of Steven Spielberg’s shark story in 1976.

This was also the era of Jacque Cousteau’s TV program and Man from Atlantis so clearly, there was something in the water, or about the water that fascinated the mainstream American audience.

Stir all those pop culture ingredients together and you end up with this not-for-all-tastes delicacy: a made-for-TV about a giant prehistoric turtle called a “cryptodira” that attacks ships in the Devil’s Triangle.

Plus you get the aforementioned dreamy vibe, and, for good measure, an oddly haunting love story between a young man named Magnus (Leigh McCloskey) and the gorgeous siren of the sea, Jennie Haniver (Connie Sellecca).

And did I mention the subplot?  It concerns a scientist, played by Burl Ives, who is studying gigantism in local sea life with his colleague, Eric (Carl Weathers).

And poor Eric, meanwhile, happens to be a modern-day Captain Ahab figure, obsessed not with the white whale, but with the colossal turtle instead. He gives his life to capture it, and like Ahab before him, spends eternity in a watery grave, attached to the creature by harpoon. 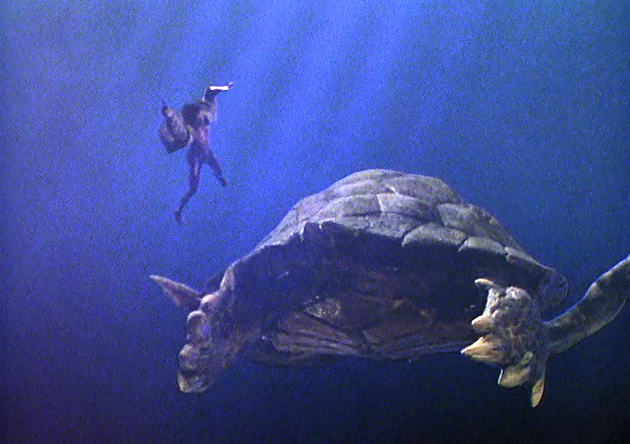 I might also note that the lovely Jennie is in thrall to the “god below,” who gifted her with eternal life, but also cursed her to live in the sea forever more as the realm’s defender.

In 1977, Rankin-Bass also produced one of my favorite TV movies of the era, The Last Dinosaur.

That movie cleverly tricks audiences into believing that the title refers to a Tyrannosaurus Rex discovered alive in an Arctic lost world, when in fact the “last dinosaur” is the lead character played by Richard Boone: a big game hunter and male chauvinist pig.

It may sound ridiculous, but The Last Dinosaur boasts true artistic merit, and actually weaves an artful comparison between the two last-of-their-breed characters.  Neither one can survive in the modern world.

By comparison, The Bermuda Depths is a bit more foggy-headed and far less direct in nature. It is over-girded with half-explored concepts and characters, and yet -- despite this deficit -- the production spins a remarkable web of ethereal melancholy.

Honestly, I found the film more appealing as nostalgia than as a satisfying work of art upon this 2014 screening, but I absolutely and unapologetically acknowledge that The Bermuda Depth has got…something.

You can’t just get your feet wet to quantify that something, either.

You have to dive in and let the oddness kind of wash over you. It’s easier to do that, incidentally, if you watch The Bermuda Depths late at night and with no lights on.

With those environmental assists, the TV-movie’s unconventional and trippy beauty has the greatest impact, and you don’t feel like you’ve wasted ninety minutes. Instead, you feel like you’ve just awoken from a long, strange, oddly beautiful and hypnotic dream.

This is a weird one, and could have only been produced in the 1970s. 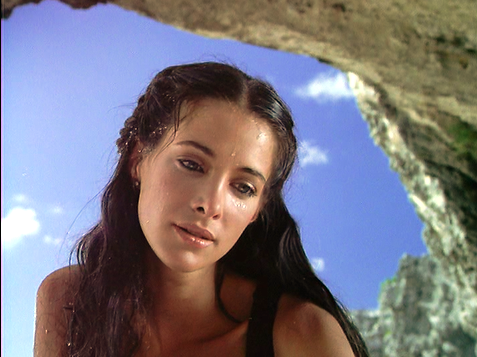 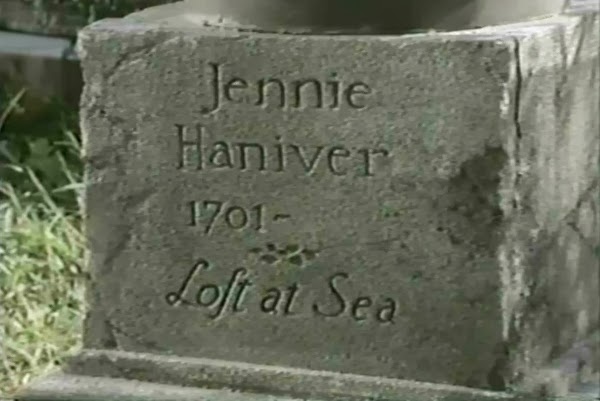 “Some see her as a little girl, others as a young woman, and even those who say they’ve seen her swim like a serpent.”

Even in the space age, the sea is not fully explored The Bermuda Depths reminds its audience.

That fact introduces, after a fashion, the story’s narrative terrain. Here, a lonely man of modernity, Magnus, interfaces with ageless beings of fantasy and horror in a realm of mystery, the sea.

Of all the subplots in the TV-movie, the most affecting one is undeniably the love story between Jennie and Magnus. He is a boy who was orphaned very young, and has therefore always been alone.

She is a woman who never wanted to connect with anyone until she was lost at sea and became servant to the God Below. Now she just wants to connect with Magnus, even though she isn’t fully alive. Some of the compositions in the film nicely highlight Jennie's entrapment.  Early on, for instance, she is seen surrounded on all sides (and virtually silhouetted...) by a rocky outcropping on the beach.  The image suggests she is boxed in. Accordingly, Jennie and Magnus remind each other of what they have never had, and never can have.

These star-crossed lovers -- one of land, one of sea -- can never find happiness, and their tragic story is re-told in the movie’s heavy-hearted ballad, “Jennie.”

Those who remember this movie from the 1970s will remember this song as plain as day. The composition by Maury Laws expresses the haunting and longing of the characters perfectly, though is -- like the film itself -- a product of its time.  Today we would call the song and its lyrics cheesy, but in 1978 “Jennie” perfectly expressed a kind of pensive, lugubrious sadness.

Some aspects of The Bermuda Depths aren’t easily comprehensible, a fact which only adds to the surreal nature of the whole affair. I understand that Jennie gave herself to the sea (and the Sea God…or Devil), and so now she must protect the Bermuda Triangle and its sea life from evil men and so forth, but what did the turtle do to deserve the same fate?

We see late in the film, for example, that both Jennie and the turtle have glowing, evil eyes, and the will to use force against Eric and his ship.

The turtle is just an enlarged sea creature however, unless the film is trying to enunciate the idea that the quality of gigantism displayed by sea animals in the region is actually caused by the Devil/God/Poseidon, and not by science. 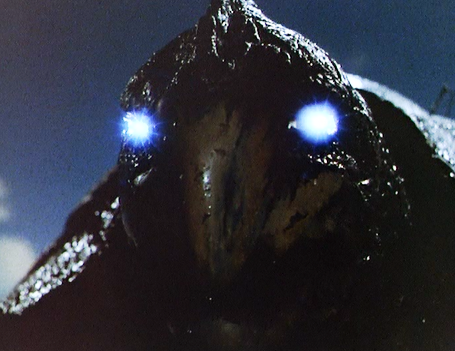 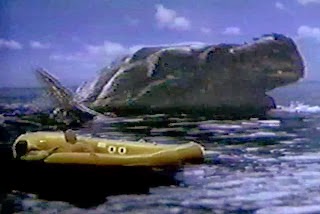 Outside of some confusing and under-explored connections like that, The Bermuda Depths thrives today almost entirely as a mood piece, as a slow-moving evocation of a love affair that can never be but will always be remembered. One of the film’s closing shots -- Jennie and Magnus’s initials scratched onto the shell of the giant turtle -- suggests that their “legend” will be told and remembered for years to come.

Since this film has achieved cult popularity that may indeed be the case.Those who saw The Bermuda Depths on TV in 1978 may not have fully understood it on an intellectual basis because of its muddled story-line, but they understood the emotions of the piece.

In short (and appropriately, since today is Valentine's Day), this could be the strangest love story ever told. 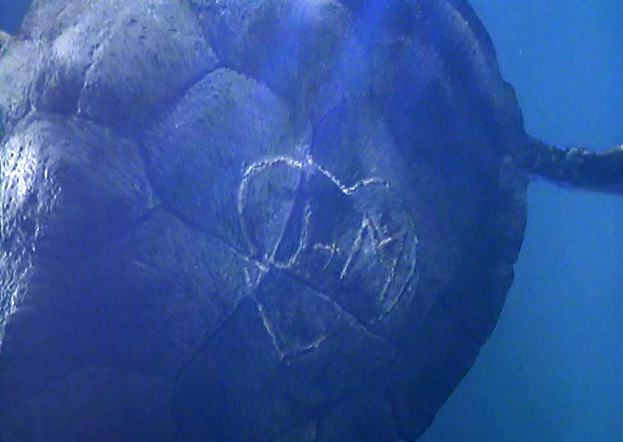 So my final take on The Bermuda Depths mirrors Magnus’s reaction upon seeing Jennie’s undersea lair for the first time.