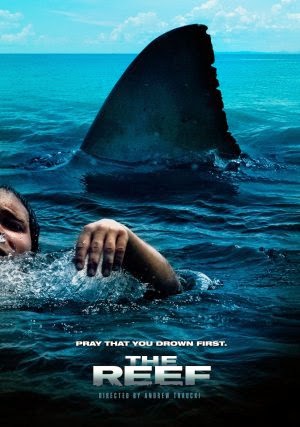 Movies like The Reef (2010), much like Open Water (2004), remind us that no matter our toys, our technology, our social class or income level, we are all a part of the natural world, and not separate from it.

That’s a fact it is all-too easy to forget from our modern, air-conditioned cocoons of safety and security.

And because -- on a day-to-day level -- we are so safe and secure, many of us actually start to believe that we will endure forever;  that our days will continue on and on for eternity.

But the truth -- which we interface with occasionally -- is that we remain just as susceptible to mortal injury, or sudden death as any other animal that inhabits this beautiful planet.

When we’re in the ocean, we sometimes feel that mortality more acutely, because the illusion of control is gone.

In the ocean, we are buffeted on the tide, splashed by waves, pulled and pushed to and fro.  It is here in this realm of infinite mystery, quite fully, that we start to understand that we are connected with nature, not above it or protected from it.

The Reef concerns five young, attractive vacationers who go for a yachting excursion near Indonesia and must reckon with their place in nature.

It goes without saying, but all five of these modern, youthful, hopeful humans desire to live. And not one of them could have anticipated that they would die in this fashion. Or on this particular day.

There’s a horrifying simplicity and intelligence underlining The Reef.  There’s almost no artifice in this horror film at all, just five desperate people who would make any deal and take any chance to continue living.

To some extent, the film’s events -- and perhaps even the order of events -- might be described as predictable right up to and including the final kill sequence.

My wife, a therapist -- who is tortured by films such as this -- often asks me why I enjoy them so much.  According to her, the only “drama” in a movie like The Reef arises in seeing people suffering and, inevitably, dying horribly.

My stock but hopefully well-considered answer is that movies like The Reef remind all of us that life isn’t necessarily about our final destination, which is known, but rather the choices we make in the struggle to avoid that destination as long as possible.

One character here, in the film’s final minutes, makes a choice I totally sympathize with.  I’d like to think I’d do the same thing given the same circumstances, but one never really knows.

Unlike Jaws (1975) The Reef features no real sense of camaraderie among its characters, and it doesn’t reflect any particular social context, like the post-Watergate milieu of Spielberg’s classic.

Instead, this effective horror film is simply about five unlucky people who go into the water with sharks, and have a very, very bad day. 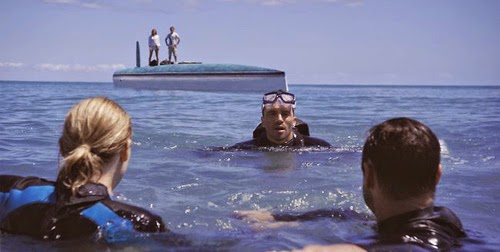 “You look like a seal in that.  Sharks love seals.”

In The Reef, vacationers Matt (Gyton Grantley) and Suzie (Adrienne Pickering) travel with Matt’s friend Luke (Damian Walshe-Howling), delivering a yacht to a customer near Indonesia. Also along for the ride is Kate (Zoe Naylor), who was once an item with Luke.  Warren (Kieran Darcy-Smith), meanwhile, is a sailor on the yacht who knows the local waters well.

After an excursion on a small island, problems occur on the trip.

The yacht’s inflatable raft/motor-boat is punctured and deflated by a coral reef.  The yacht itself suffers catastrophic damage when the coral rips the keel right off.

Swim for nearby Turtle Island, or stay and sink with the boat.

Warren -- who has seen sharks in these waters -- refuses to go.  But Kate, Luke, Matt, and Suzie begin their long swim.  Luke estimates it should take them no longer than five hours to reach land…

Before long, however a great white shark catches sight of the group, and begins hunting… 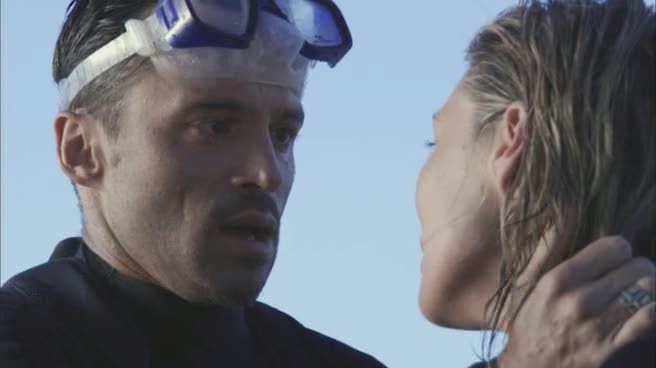 “The boat is fucked.”

The Reef is an absolutely relentless horror film and one that also plays as extremely plausible.  There are no last minute rescues, no miraculous survivals, and, finally, just a reckoning that fate can be remarkably cruel.

One character notes early in the film that people are more likely to be killed by a bee sting than by a shark attack, but certainly the odds change dramatically in open water.  The film’s terror quotient also rises when the swimmers realize that they are being attacked not by different sharks, but one very determined hunter…who has been pacing them since they first got their feet wet.

The Reef is dark, but not as nihilistic (and perhaps, not as artistically high-minded…) as Open Water was.  So here the idea is not surrendering the inevitable and going through the five stages of death.  Rather, in The Reef our choices can make a difference, if even a small one.

For instance, Matt -- once bitten by a shark -- begs his fellow swimmers to stay away from, knowing that they will be attacked next.  But Kate is Luke’s sister, and Suzie is his girlfriend.  They can’t stay away, and their survival is jeopardized.  They behave in an irrational manner, and that fact says something important about the human species.

At another crucial point, Luke makes a choice about his survival, and about Kate’s, and it is brave, for certain.

The upshot is that we see that, even in a terrible situation, humans remain human.  Even when facing abject fear and in an environment where we are out of our element, we can make a selection that is valuable, and will be remembered.

So The Reef may be predictable in broad strokes  -- a  shark attacks swimmers in the water -- but in little ways, it forges these little grace note moments, wherein a character responds with heroism, or selflessness.

But man is also man and even in the water, he holds certain relationships and concepts dear.  I appreciate how The Reef compares the two species.  Sharks don’t second guess themselves and worry about those who are mortally wounded.  They don’t hesitate.  They meet their needs, and that’s it.

But humans are of a vastly different tribe, and even in a venue as dangerous as the ocean, cultural rules about valor, honor, and decency play a role.

Can a shark understand the concept of self-sacrifice?

Above, I wrote about the idea that man is not separate from nature, despite all the smart phones, social media and so forth that dominates our 21st century existence.  There are two worlds -- the world that is really there, under the surface, and the world that we look at every day, on the surface.

This very notion is played out in the film through a composition that often appears: Luke dons his goggles, peers under the water, and looks about to see if there are any sharks nearby, threatening the group. But above the water, on the surface...everything is calm. 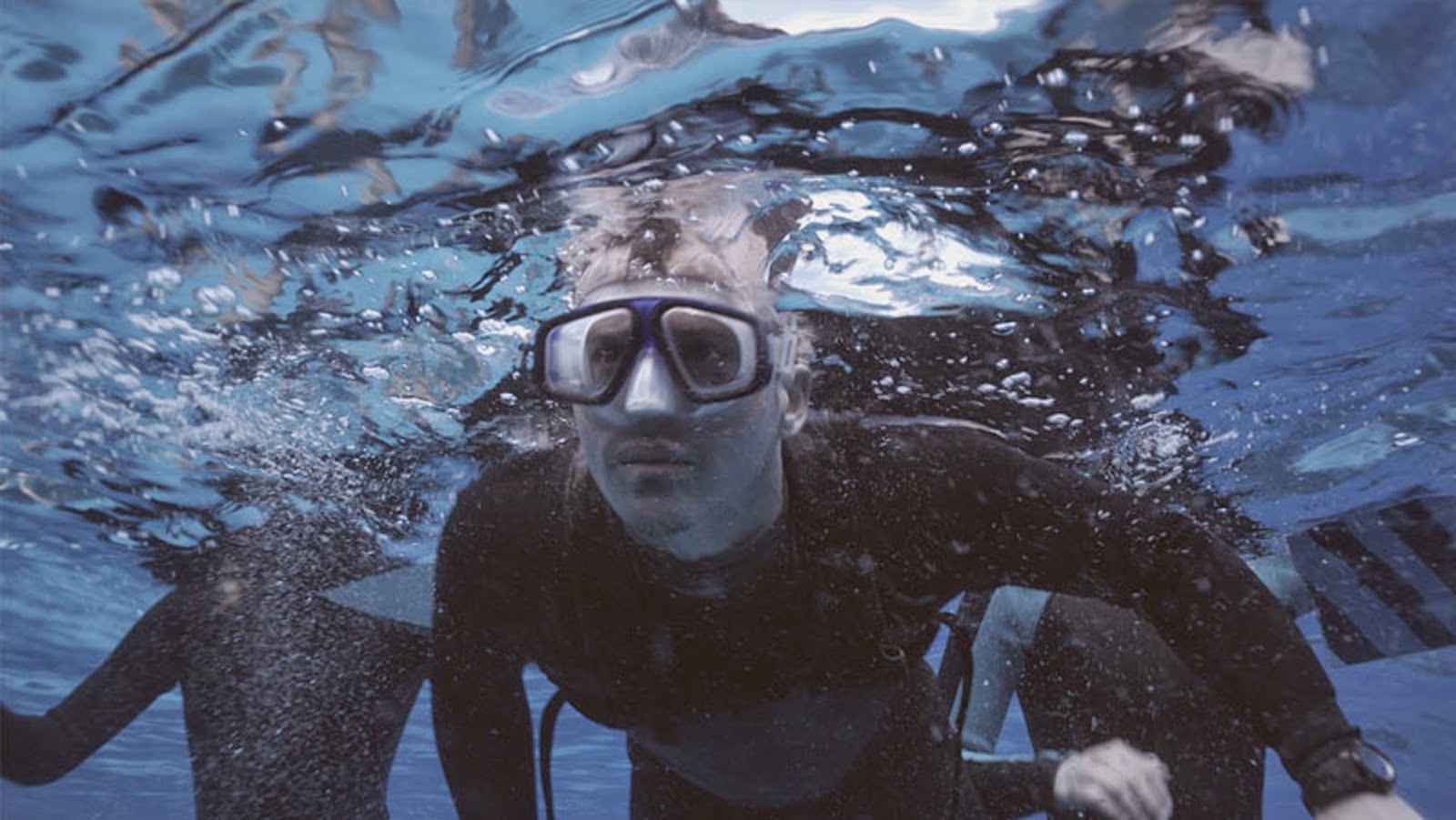 I believe that horror movies like The Reef (and 2010’s Frozen to a similar extent) hold a place of value in the society because they serve as reminders of this fact.  Watching a movie like The Reef, you can’t help but put yourself in the position of Luke, or Matt, or Kate and wonder what you would do.