This week's episode of the 1977-1978 Filmation, live-action Space Academy (1977) series is called "My Favorite Marcia," and it guest-stars Dena Dietrich as Marcia Giddings, a "rogue" space trader; one bound to make troubles for our regular characters. 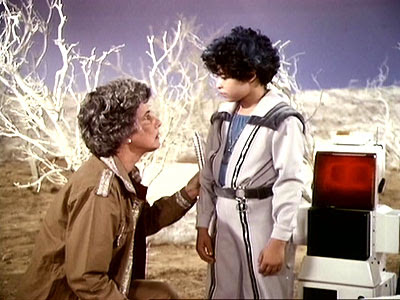 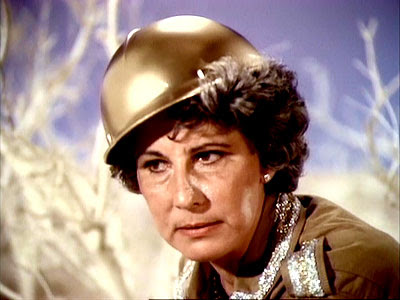 So in this case, think Harry Mudd, The Taybor, or The Outrageous Okana, to name a few such similar characters in cult-TV history.

In "My Favorite Marcia" stalwart Commander Gampu (Jonathan Harris) leads a cadet team to study a star going supernova, when he determines that a "galactic distress beacon" has been activated on the fourth planet in a nearby star system.

He investigates the beacon and finds that his old "friend," space trader Marcia Giddings -- a woman "with the happy faculty of always being in the wrong place at the wrong time" -- is hunting diamonds on the planet surface, but that her spaceship's power has been neutralized by an evil robot.

And that evil robot is -- delightfully -- a re-dressed Robby the Robot from Forbidden Planet (1956). In this episode, however, Robby has been given a new brain pan, a "dome," and glowing blue eyeball for Space Academy.  He's playing a "war machine" gone mad; one whom Peepo says "wants to harm everybody." 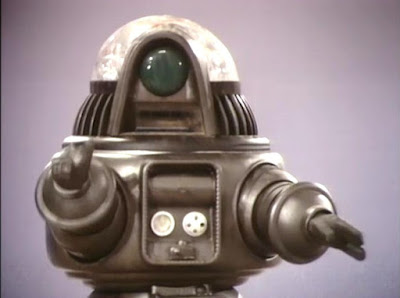 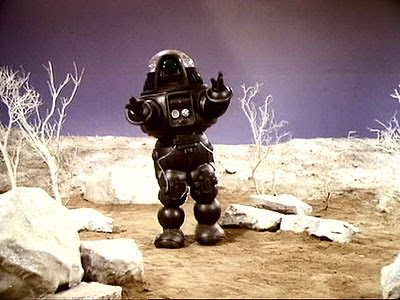 To prove his evil intentions, the robot traps Laura (Pamelyn Ferdin), Gampu, and Tee Gar (Brian Tochi) in a yellow "force shield" (which is accompanied by the bionic sound effects from The Six Million Dollar Man and Bionic Woman).

It is great to see Robby back in action in "My Favorite Marcia,", even in his altered form, though one disappointment of the episode is that Gampu seems more intent on sparring with Marcia than in dealing with the dangerous robot.  Also, it isn't entirely clear why the robot disappears.  Was he actually teleported away?

Still, in a weird way, this episode feels like a celebration of cult-TV history.  We get a funny title, based on My Favorite Martian, a familiar character-type (a distaff Harry Mudd), and an old friend from the genre: Robby.