Well, there's another crisis on the 1977 Saturday morning live-action, Filmation TV series Space Academy this week. An "energy distributor" on asteroid BX3 is leaking and could poison outer space for three parsecs, including an inhabited space colony.

But on the Academy, the cadets are embroiled in a crisis. Captain Chris Gentry (Ric Carrott) has ordered Cadet Matt Prentiss (John Berwick) called up on charges because he showed "flagrant disregard for procedure" on their last mission. Commander Gampu settles the crisis by suspending the hearing on the matter, and putting Matt Prentiss, a laser technician, in charge of the mission to seal the malfunctioning energy distributor.

The mission proves dangerous, and Matt orders the Seeker through an ion storm and - again - Chris reacts negatively to Matt's irresponsibility. 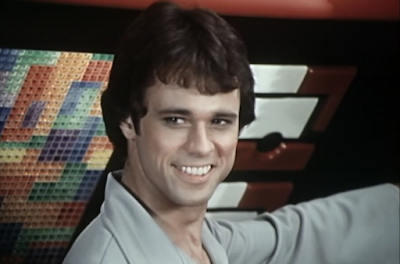 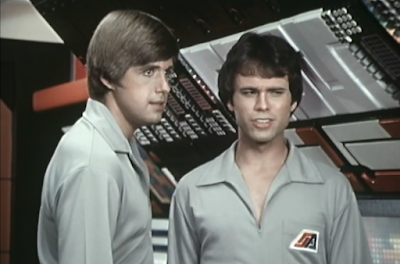 "The Cheat" is essentially the same story as the previous installment of Space Academy, "Life Begins at 300."

A pushy non-regular learns a valuable lesson about working with "the team" after initially being a hothead. This episode distinguishes itself primarily because Matt asks Laura (Pamelyn Ferdin) out on a date(!), and also because the episode features a funny slow-motion interlude wherein Tee Gar Soom uses his karate skills to break down a jammed engine room door on a Seeker.

Meanwhile, fans may remember that John Berwick's character, Matt Prentiss shows up in a first season episode of Jason of Star Command (1978-1980). In Chapter 10, "The Disappearing Man," it is reported that he has been missing for months. In truth, he has been a guinea pig for the invisibility experiments of Dragos (Sid Haig).  So Berwick's character represents a little cross-series continuity.

I do think that Space Academy missed a bet on teaching a good lesson to kids with stories like "The Cheat." In both this and the previous installment, our heroes were proven to be correct in their convictions all along, and it was the dangerous interloper who had to learn a lesson.

All the good guys really had to do was express "forgiveness" for the trespassers.

Wouldn't it have been nice had Chris or Gampu or one of "our" team been proven wrong in "The Cheat" instead? 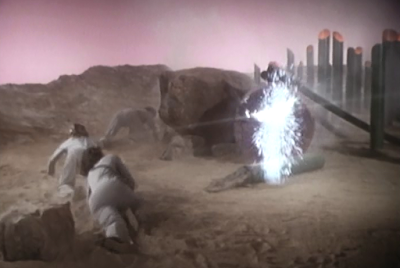 And Matt -- the guest star -- been proven correct?

Sometimes, a good lesson for kids to learn is that it's okay to be wrong; and to be the one asking for forgiveness. Right? It seems that Chris reacts negatively to Matt's position of authority...maybe he was just threatened all the way along by someone as capable as he was...and again, that's something that kids should learn about: feelings of competition and jealousy and how to deal with them.
Otherwise, this episode introduces a new feature for the versatile Seeker.  Here, we see that the front section can extend arms, which prove useful in pushing an asteroid from its collision course. 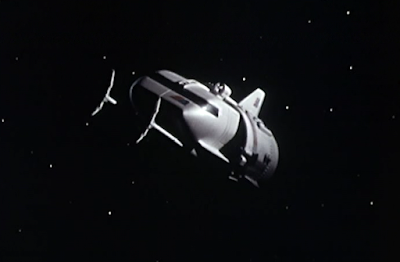 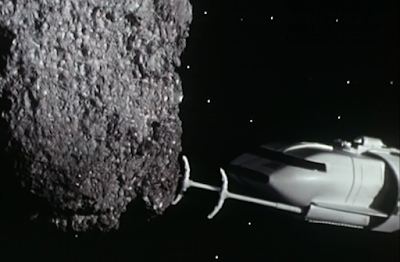 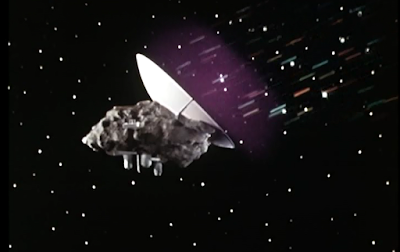 Finally, the energy distributor is a nice new miniature for the series.  It is asteroid-based in terms of construction too, which marks it as being produced by the same culture that created the "planetoid" for Space Academy.