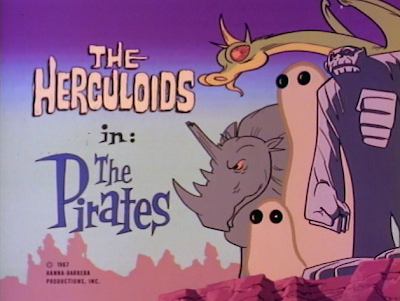 Hanna-Barbera’s The Herculoids (1967 – 1969) aired on Saturday mornings before I was born, but I watched it endlessly in reruns as a kid, and have always had affection for it.  The series visuals were designed by Alex Toth, the artist behind Space Ghost and other H.B. efforts.

The Herculoids is set on the distant, jungle world of Azmot.  There, a human family consisting of Zandor (Mike Road), his wife, Tara (Virginia Gregg) and son Dorno (Ted Eccles) defend the unspoiled planet from technologically-advanced invaders.  They do so with the assistance of several colorful and dynamic alien creatures.

These aliens are: Zok, the flying dragon, Igoo, a giant stone ape-like creature, Tundro the rhino-ceratops, and last but not least, the playful protoplasmic adult and child, Gloop and Gleep.  Possessed of more than a mere rudimentary intelligence, all these bizarre creatures rally when faced with external menaces.


Although it is never spoken or explicitly stated on screen, The Herculoids appears to be a space age variation on Edgar Rice Burroughs’ Tarzan mythos.

The wild, unspoiled Azmot represents Africa at the turn of the 19th-20th century, and Zandor is the lord of this particular jungle.  In the Tarzan story, Tarzan was sometimes accompanied by his wife, Jane, and son Jack, and those characters have clear counterparts here in Tara and Dorno.  The aliens that Zandor communicates with on the series -- Zok, Igoo, Tundro and Gloop and Gleep -- represent the wild animals of the jungle, the apes and elephants, specifically, that Tarzan cooperated with.

In many Tarzan narratives, particularly the films, the “white man” invades Tarzan’s jungle with his technology and imperialistic/capitalistic philosophy, only to be beaten back by Tarzan’s efforts.  That element is also preserved in The Herculoids, with Zandor and his family constantly resisting space age incursion and high technology, and using the “primitive” qualities of team work and cooperation to do so.

In the episode “The Pirates,” this dynamic is asserted.  A group of hostile space pirates board a spaceship in flight while the crew is asleep in suspended animation, and steal a treasure.  They hope to bury the loot on Zandor’s world, Azmot. 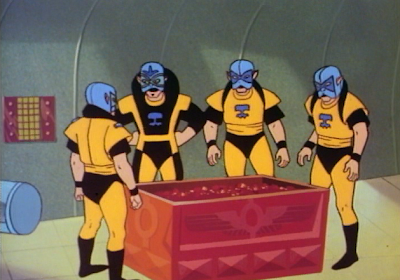 Once on Azmot, these pointy-eared, goggled pirates abduct Dorno, “the perfect hostage” to make Zandor comply with their demands.  But Gloop rescues the boy, and Igoo smashes the spaceship, sending the pirates careening into a mountainside.

The Herculoids gaze at the wreckage and Dorno asks about the treasure.  Zandor notes: “we’ll leave it there and forget it.  And hope no one ever finds it.”  The point is, of course, that material wealth means nothing to the Herculoids.

Unlike the didactic Saturday morning program of the 1970s, such as Shazam Or Land of the Lost, The Herculoids is all action all the time.

The short, ten minute installments consist of a constant jazzy soundtrack, cacophonous prehistoric grunting and roaring, and space-age sound effects.  The visuals are, delightfully, incredibly pulpy in nature.  The invading aliens man “flying torpedoes,” arm themselves with ray guns, and possess green skin and pointed ears.  The technology is basic mid-1960s futuristic, meaning stream-lined rocket ships with fins, and large computer banks.  I have a tremendous love for this old-fashioned “future” look, and also love the alien monsters of The Herculoids. 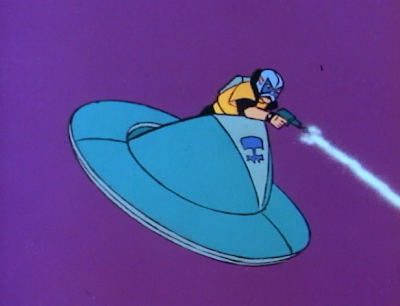 The problem of course is that the stories are incredibly repetitive, and not much character background is provided.  Even “The Pirates” doesn’t really make a point of providing closure.  Are the pirates killed when their spaceship crashes into the mountain?  Are they captured?  What happens to them?

Globally-speaking, the series characters and situations raise questions.  Why have Zandor and his family shunned civilization in the space age?  As “The Pirates” suggests, Zandor is known throughout the galaxy.  Who is he?  A soldier who once fought in a galactic war? A vanquished leader? 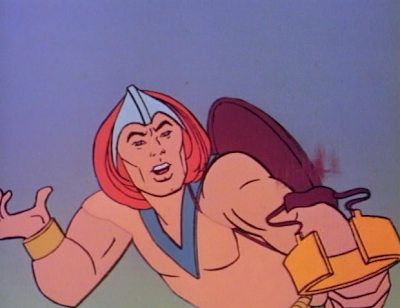 Although movie adaptations of beloved franchises can be dicey, a live-action version of The Herculoids would be great assuming it maintains the design of the characters, puts some flesh on the Tarzan flourishes, and gives a little background on the outer space milieu, and Zandor’s past.  I know that new Tarzan movies are currently in the works, but audiences have demonstrated (in the instances of The Shadow, The Phantom, The Rocketeer, and Sky Captain and the World of Tomorrow) that they don’t want to go back to a previous age for modern genre entertainment

The Herculoids captures the essence of the Tarzan universe, while also setting the story in the far-flung future. 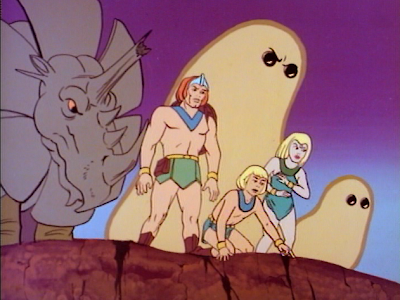