You can make the Veronica Mars Movie Happen... 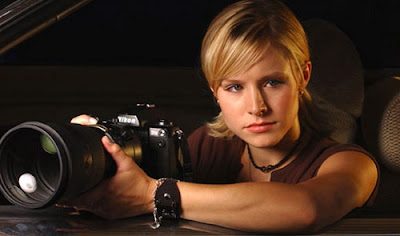 I just contributed to the cause, and I hope you will too.

Veronica Mars' creator Rob Thomas and star Kristen Bell are behind this Kickstarter project so it is for real.  There are thirty days left to meet the goal of 2 million dollars.  644,000 2,515,000 dollars have already been raised.

If you haven't seen Veronica Mars, you are really missing something.  This is what I wrote about the series, not long ago:

"In just three years, Veronica Mars gave us one of the greatest, most memorable TV detectives since Peter Falk’s Columbo in Kristen Bell’s feisty, brilliant character.

The mystery format is an under-served genre on television right now, and no show has achieved as much as Veronica Mars did regarding that genre, adroitly updating the form for our high-tech age and advances like social media and cell phones. Picking up on the series now would allow us to follow Veronica as an adult (with new technology…) meaning a whole new avenue of storytelling, whether she’s at the FBI, or still working with her Dad in Neptune.

At heart, Veronica Mars was also a mystery series that examined class differences in America: the lives of the obscenely rich and the very poor in one particular context (a California beach town).  Today, that background context feels much more pertinent.  Hence Veronica Mars deserves a return."

So go ahead and kick in a few bucks, if you can...

Update: the campaign's goals were met, and the money has been raised!  My thanks to everyone who contributed!