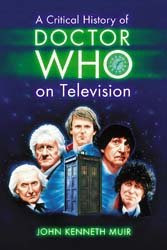 Writing a primer for a series that has endured for so long and featured so many different actors, writers, and directors isn’t exactly a simple proposition.

But even with all the cosmetic changes and twists-and-turns in terms of story arc and intent, Doctor Who is essentially the tale of one very unique and mysterious character.  The Doctor is a (time) traveler, renegade and crusader.  Sometimes -- especially of late -- he even seems a little bit like an adrenaline junkie.

An alien with the power to regenerate and thus alter his physical appearance and even personality, the Doctor’s true identity is shrouded in secrecy.  Is he representative of alien royalty?  Is he God Himself?  Is he a Loki figure of mischief and chaos?

We don’t exactly know the precise answer, even after fifty years. 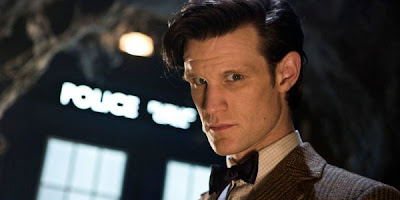 What we do know (pretty much) is that the Doctor universally seems to be on the side of the weak and endangered (even if he is playing a long game…), that he universally travels with one or more companions…often human, and that his mode of transportation is a time-ship called a TARDIS (Time and Relative Dimension in Space) which is stuck in the shape and blue coloring of an early 1960s British “police box.”

The classic series (1963 – 1989) and new series (2005 - ) have tended to follow two particular paradigms or models in terms of narrative or storytelling.

The first is the “invasion” story.

In this brand of tale, the Doctor prevents a hostile alien force from taking over Earth.  When I wrote my book, A Critical History of Doctor Who in 1996 (published in 1999), I estimated that a full sixteen percent of Doctor Who serials involved nefarious plots of alien invasion.  The invaders have been, amongst others, Autons, Cybermen, Daleks, Sycorax, Carrionites, Sontarons, and the Master.  The new series follows a similar pattern. 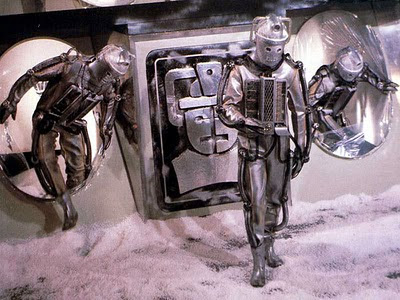 The second type of story featured by Doctor Who is what I term The Time Machine Dynamic.

In both the H.G. Wells novel and the George Pal film of The Time Machine (1960), the premise is identical: a traveler in time arrives in new environs (Earth of the future, for instance…) and finds that two cultures are locked in Darwinian combat.

One culture -- the Eloi -- is more human, but weak in some critical way. The other culture -- The Morlocks -- represents a perversion of humanity or human values, and is a threat to its survival as well.  The time traveler chooses side and selects morality and humanity over…monsters.

This is very much the premise of many of the Doctor’s adventures set on other worlds.  He defends the kindly Thals from the Daleks in “The Daleks,” the innocent Gonds from the robotic Krotons, the awakening humans from the Wirrn in “Ark in Space,” and so on.

Over and over again, the Time Machine Dynamic repeats on the series, and in virtually every case, the Doctor utilizes his superior intellect and knowledge of history and/or science/time to stop the unjust, and free the enslaved or oppressed.

There are other inspirations and sources for Doctor Who storytelling too.  The period of the third Doctor (played by Jon Pertwee) closely resembles the Quatermass serials and movies of the 1950s-1960s.  In other words, these tales involve a very intelligent Earth-based scientists reckoning with some kind of alien incursion on Earth.

Lastly, many Doctor Who stories have been out-and-out pastiches of other popular forms.  “Voyage of the Damned,” for instance in the era of the Tenth Doctor is a delightful and unexpectedly moving take on sea-going disaster films like The Poseidon Adventure or Titanic (1997)…only set in orbital space, not in an Earth ocean. 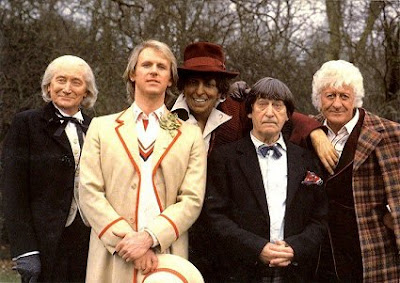 In American terms, a quality that makes Doctor Who so unique in the cult-television pantheon is the fact that the lead character is not part of some quasi-military hierarchy, as we witness on Star Trek, Space:1999, Sea Quest DSV, Battlestar Galactica or Babylon 5. And furthermore, The Doctor travels unarmed.  His sonic-screwdriver may help him unlock doors or short-circuit a computer, but it is only rarely deemed an actual weapon (“The Doctor’s Daughter,” for instance).

Thus far, there have been more than a dozen actors who have played the time traveling Doctor (if one counts Peter Cushing in the movies, and Richard Hurndall, who played the first incarnation in “The Five Doctors”), and it useful to categorize the series’ eras by lead actor.   In each era, there is a different Doctor with a different personality. He faces different enemies and is accompanied by different companions.  Importantly, however, story-style is also a bit different in various eras.

I have been catching up with the current series at night (I’m currently at the beginning of Series 7) while revisiting the classic series with my son Joel for our weekly movie nights and Sunday afternoons.  It has been a tremendous pleasure to witness classic Doctor Who as seen through Joel’s eyes.  He is six years old, and as I have written before, no other series that I watch (Star Trek, Space: 1999, Land of the Lost) has captured his imagination in the way that Doctor Who has.

It sounds simplistic to pin this fascination on the aliens or monsters, but Joel is absolutely taken with the aliens on Doctor Who.  To my eyes, some of these alien costumes may not hold up too well, but Joel loves them without reservation.  We recently watched “The Curse of Peladon” and “The Monster of Peladon,” and he was so taken with the creatures -- the Ice Warriors, Alpha Centauri, Aggedor, and the Arcturians -- that we had to build him an Arcturian costume out of a cardboard box and tin foil.  And sometimes Joel also pretends to be Aggedor…and I have to practice my Venusian lullabies before bedtime.

I think it is worth noting that Doctor Who began as a program for kids, and that the classic shows really work so well for that age group.  Joel actually prefers the black-and-white episodes, and has veritably been mesmerized by serials such as “The Chase,” “The Space Museum,” Tomb of the Cybermen,” “The Mind Robber,” and “Seeds of Death.”  I love seeing how Doctor Who sparks Joel’s imagination (not to mention his vocabulary…).

We’ll begin next week with the First Doctor, Wililam Hartnell, and his landmark story “The Daleks.”

I’ll try to cover before November at least two serials per Doctor.  I don’t want to give anything way, but my favorite Doctors are: Patrick Troughton, Tom Baker and -- to my complete and total delight and surprise -- Matt Smith.

Email ThisBlogThis!Share to TwitterShare to FacebookShare to Pinterest
Labels: Doctor Who