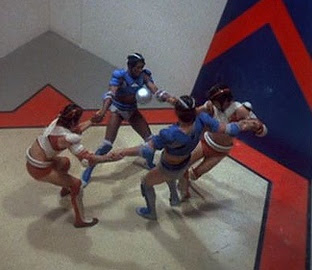 Throughout cult-tv history, we have witnessed our colorful heroes indulging in team sports and individual acts of fitness. The primary idea here is one of staying fit, of keeping in good shape.  In Star Trek’s future, the healthy officer of Starfleet don’t give short shrift to physical exercise, and we’ve witnessed on more than one ship how the officers utilize the ship’s gymnasium (“Charlie X”) or conduct their daily work-out routine (“The Price.”)
In terms of training and fitness, the universe of Gerry Anderson was much the same. The pilots of S.H.A.D.O. were seen to work-out rigorously in exmples of physical readiness (“Ordeal”) in UFO. And on Space: 1999’s Moonbase Alpha, a weight room was depicted in one episode (“Testament of Arkadia”) though it was really a light redressing of Commander Koenig’s office. 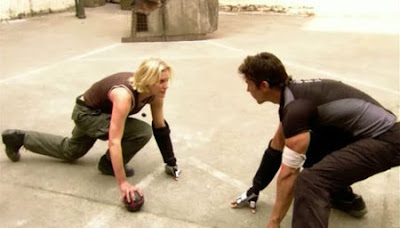 In other programs, alien versions of sports have appeared.  The Colonial Warriors of the original Battlestar Galactica (1978) doubled as athletes, for instance, in a basketball-styled game called Triad that appeared in episodes such as “War of the Gods” and “Murder on the Rising Star.”  In the re-made Battlestar Galactica of the last decade, "Triad" became "Pyramid" instead.
Buck Rogers in the 25th Century (1979 – 1981) likewise revealed a veritable panoply of alien and futuristic sports in the first season episode, “Olympiad.”  In truth, this story was a Cold War allegory about an athlete attempting to defect from a repressive alien civilization, a stand-in for our then-rival, the Soviet Union. 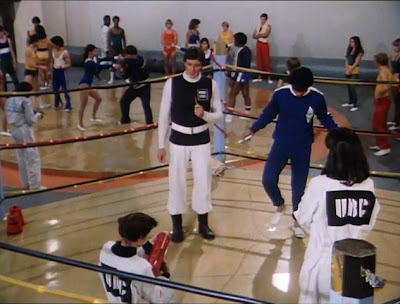 “Olympiad” aired in 1980, the same year that President Carter oversaw the boycott of the Summer Olympics in Moscow to protest the Soviet invasion of Afghanistan.


The Buck Rogers allegory not only spoke of the political climate of the day, it introduced the world to futuristic variations of boxing, the high jump, and even the luge competition. In this case, the luge -- or astro-slalom - was a spaceship navigating a corridor of space force fields! Although the episode dealt with freedom, and a culture that did not value freedom, it also offered hope since all the planets of the galaxy still came together every four years to celebrate the Olympiad.

In the more horror-oriented cult-tv programs, sports and fitness have often been entry points into terrifying story possibilities.  In Buffy the Vampire Slayer’s second season installment, “Go Fish,” members of the Sunnydale High swim team were (under their coach’s guidance…) inhaling a chemical to improve speed and endurance in the water.  However, the substance was actually transforming the boys (including Prison Break's Wentworth Miller...) into reptilian creatures from the black lagoon.  Once more, a metaphor was at work under the surface, only here it concerned performance-enhancing steroids and school athletic programs. 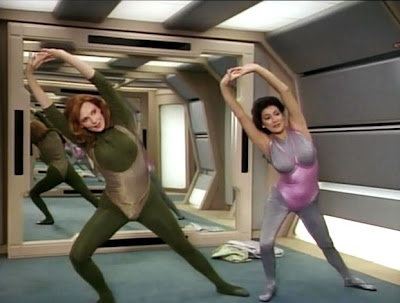 Smallville’s early episode “Hothead” charted a similar path.  When Clark (Tom Welling) joined the football team over his father’s objections, he discovered that the athletes were relaxing in a sauna that utilized the green meteor rocks, or Kryptonite.
Sometimes instances of sports and fitness on cult television are meant only as informative expressions of a character’s off-duty hobbies or pursuits.   Involvements in sports and exercise provide a little sideways peek at familiar characters, in new venues. We saw Fox Mulder play basketball frequently on The X-Files. Captain Picard practiced fencing (“We’ll Always Have Paris”) and rode horses (“Starship Mine,” “Pen Pals”) on Star Trek: The Next Generation, while Commander Koenig seemed to favor Kendo in Space: 1999.

Captain Sisko (Avery Brooks) on Deep Space Nine was a Starfleet officer who had made sports an important part of his life.  A lifelong fan of baseball, Sisko viewed the sport not just as a hobby...but as a passion and a guiding philosophy.  He kept a prized baseball (signed by Buck Bokai of the London King) on his desk outside Ops, and in one episode, "Take Me out the Holosuite," put together a team -- the Niners -- to compete against Captain Solok and a team of Vulcans.