If Doctor Who met The Texas Chain Saw Massacre (1974), you might end up with something  like Torchwood’s ultra-violent first season episode, “Countrycide,” an early, dramatic and gory high-point in Russell T. Davies’ TV long-running spin-off.

First aired in the UK in late November of 2006, Torchwood’s “Countrycide” was written by Chris Chibnall and directed by Andy Goddard.  The story finds the intrepid Torchwood team heading out to the isolated and remote Brecon Beacon mountain range to investigate a series of unusual missing persons cases. Specifically, seventeen people have disappeared in the mountains in five months -- all within a twenty mile radius -- and there is no pattern in terms of age, sex, or race.

Led by the dashing Captain Jack Harkness (John Barrowman), new recruit Gwen Cooper (Eve Myles), the team doctor Owen Harper (Burn Gorman), computer expert Toshiko Sato (Naoki Moro) and Ianto (Gareth David Lloyd) set up camp in the remote mountains.  Owen stresses how uncomfortable the country locale makes him feel, and in short order, there's good reason for his discomfort.  Before long, the Torchwood vehicle is stolen, and the group is left to fend for itself at a nearby inn, the abandoned "Tap House.”

There, the group finds skinned, half-eaten corpses, and also one young survivor who warns of monstrous, implacable attackers.  The Torchwood team suspects that the temporal and spatial “rift” which deposits alien life-forms in Cardiff -- a corollary to Sunnydale’s “Hellmouth” on Buffy the Vampire Slayer -- has mysteriously expanded to include this area in South Wales.

One by one, the team is captured by monstrous, hooded foes, and soon Torchwood’s best and brightest find out that the brand of evil they now face is all human.  Specifically, the locals celebrate a “harvest” every decade, enthusiastically going cannibal in the process. “We’re food,” Tosh realizes, after gazing into a refrigerator filled with human body parts.
After barely surviving an attack by the cannibals, a shocked Gwen comments that this is all “too much,” that interfacing with dangerous aliens is one thing, but facing the human heart of darkness is something else all together… 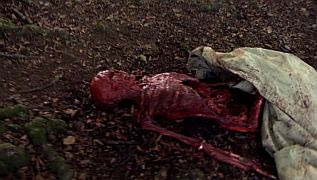 Incredibly violent and disturbing, “Countrycide” is the closest thing to 1970s savage cinema (The Hills Have Eyes, Deliverance, Texas Chain Saw) that I have seen on television since The X-Files aired the (later banned from network broadcast...) fourth season episode “Home” in 1996.  Bloody and violent, this British cult series unexpectedly tracks off its predictable course and showcases a riveting drama that eschews the paranormal, the supernatural and the alien.
From the first sequence of a woman driving alone at night and spying a corpse on a lonely country road, “Countrycide” seeks to terrify, unsettle and provoke.  It largely succeeds, in part because of the tremendously effective location shooting.  Several long establishing shots of the Torchwood team operating under gray, roiling skies -- surrounded by inhospitable mountains on every side -- transmit perfectly the isolation and danger of the locale. 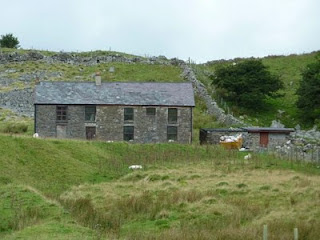 In addition, the episode frequently cuts to P.O.V. shots from hilltops or through window panes gazing at the team; watching unnoticed as Jack and his friends attempt to unravel the mystery.  Tight-framing is utilized during several tense sequences, and the episode also deploys high-angles to help maintain the sense of tension and anxiety throughout the hour.  The visualization here seems much more adroit than many other early episodes of Torchwood, and it's clear that everyone was on the same page in terms of producing the equivalent of a horror movie.
The horror-based film grammar in "Countrycide" fits perfectly with the horror tropes the narrative dutifully marshals.  The group heads into an area of no cell phone reception (convention #1) and learns that the local police are complicit with the atrocities they find (convention #2).  Later the bad guys cut the power in the inn (convention #3), plunging Jack and company into darkness.  And finally, the episode resolves with a Sam Peckinpah-like slow-motion massacre of the villains (convention #4)  in a location that seems to deliberately recall Straw Dogs (1972).
In terms of horror movies, I have always preferred the “savage cinema” sub-genre because I find it more realistic than some other styles.  The core idea of the savage cinema is that you are living your normal life when you take a wrong turn (into rural Texas, or the Nevada desert, or the mountains) and end up countenancing a kind of horror you could never imagine.  This brand of horror is grounded in real human desperation and insanity.  “Countrycide” dwells on such notions and at every turn, Jack and his team seem outmatched and unprepared to deal with it.
The Torchwood team's lack of understanding about the cannibals in "Countrycide" represents a great spin on the series’ sci-fi premise.  Up to this point, the mysterious Jack seemed to have all the answers.  He could recognize and diagnose crimes as being the results of certain alien incursions, and always devise an appropriate defense.  But here he’s caught off-guard, and “Countrycide” offers the most dangerous engagement yet for his team.

Like Leatherface in the Chain Saw movies, the crazy cannibalistic locals of this episode seem unable to relate to people as anything but as a resource to be used up.  “He’s meat” says the leader, of one victim.  “Meat has to be tenderized,” he informs Tosh, looking her up and down…but not as a sexual conquest.  Nope, he sees her...as dinner.
“Countrycide” also boasts a truly wicked sense of humor. An early scene set at a roadside hamburger stand suggests some of the mystery to come, and there’s a droll moment wherein Tosh off-handedly tells a story about a friend contracting Hepatitis from eating a burger at a similar establishment.  The reactions from the team members (all dining on burgers at the time…) is priceless.

Finally, “Countrycide” works so well within the Torchwood continuity because the engagement with the cannibals boasts strong repercussions for the primary characters.

Isolated by the Torchwood organization's demand for “secrecy,” Gwen is unable to tell her fiancé about the horror she has witnessed here.  Feeling vulnerable and alone afterwards, she turns to Owen for comfort (and sex...), an act which will have repercussions down the line.  The episode also adds another layer to the puzzle of Jack's background.  Here, Harkness reveals to a cannibal that one of his "skills" is...torture.  Jack Harness, Jack Bauer?
At this point, I've finally caught up with the first three seasons of Torchwood, and by my estimation, the series just kept getting better and better each year.  The third season’s “Children of Earth” is one of the most devastating, emotionally-affecting science fiction TV dramas I’ve seen in a long while.  Early on, however, the show wasn’t quite as sure-footed.  “Countrycide” is a notable exception: an extremely savage and disgusting early installment that explodes the carefully established rules of the series, and reveals, rather dramatically, how even with aliens lurking about, the ultimate enemy remains man himself.

When you reach “Children of Earth,” the third season, you begin to detect that this idea of man's heart of darkness -- so brilliantly vetted in “Countrycide” -- is not a detour…but rather an intentional destination.
at April 05, 2012