Earlier this week, a reader here on the blog asked me for my thoughts about Netflix’s Hemlock Grove (2012 – 2013), the Eli Roth-produced horror TV series based on Brian McGreevy’s novel.

I have watched the first half-dozen episodes of the first season twice, so my knowledge is based on those episodes and my double viewings of them.

My conclusion at this juncture is that the series is somewhat inconsistent in tone and approach.

Sometimes it is well-acted; sometimes not.

And sometimes Hemlock Grove qualifies, actually, as droning and tedious.

There were times I had a hard time staying tuned to the action on-screen, which is why I watched the episodes twice.

At this juncture, I cannot report accurately whether this sense of muddled inconsistency or uneven-ness recurs later in the series’ run… only that the episodes I saw vacillated wildly between curious strangeness and tiresome cliché.

I will readily admit that perhaps I didn’t watch enough episodes to find the series' “vibe” resonant, or to fall in love with the characters. The central mystery is pursued with such haphazard, variable, irregularity that it did not hook me, either.

Again, this is my critical evaluation based on what I viewed. The aforementioned blog reader made n interesting case for the program’s virtues, and two pod-cast hosts that I know and respect greatly lauded the series to me as well.

I made the mistake of dismissing The Vampire Diaries (2009 - ) after the pilot episode, some years back, and don’t wish to make the same error here.

All I can write is that based on my admittedly-limited viewing of the first season, Hemlock Grove proved more uneven than enticing. 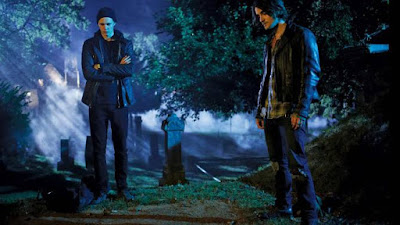 They become uneasy friends and soon work together to solve a mystery: a series of vicious animal-attack style murders in Hemlock Grove.

The series, which ran for three seasons, is a soap opera in its structure and narrative development, and also concerns a young woman, Letha (Penelope Mitchell) who believes she has been impregnated by an angel. Others fear she may have been raped. 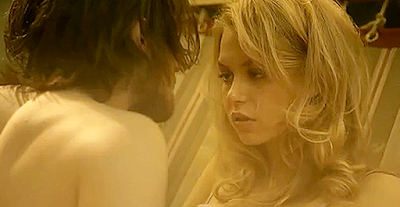 Meanwhile, there’s a deeper background to the story as well.

Roman’s sister, Shelley (Nicole Boivin) is a deformed young woman and outcast. And Roman’s mother, Olivia Godfrey (Famke Janssen) is having an affair with her former brother-in-law, Norman Godfrey (Dougray Scott), who works at the mysterious Godfrey Institute of Medicine.

Meanwhile, Peter’s mother, Lynda (Lili Taylor) also seems to possess some secrets, as well as a healthy dislike for Olivia. 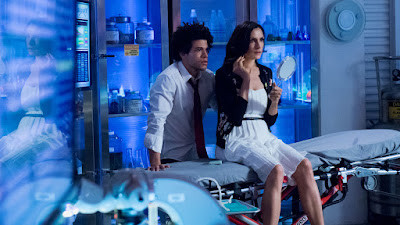 What I admire most about Hemlock Grove is the series’ setting.

The town itself has become a zombie, or undead.

The rust belt location once thrived as the home of a successful steel mill. But once the economy took a down-turn, industry and manufacturing died, thus leaving the town’s denizens stumbling on futilely, trying to figure out where they belong and how they can live.

The new “industry” in town, --which hovers on the cutting edge of bio-medicine/and bio-abomination “science run amok" -- has replaced the rust belt soul of the town with something, then, that the citizens fear and dread.

There are a few shots in Hemlock Grove which reflect this new reality.

We see the apricot, autumnal nature of the town and its lush landscape, but then this strange, white, high-tech ominous tower occludes the sky-line. It’s like a cyborg growth or blot on the town’s natural horizon. 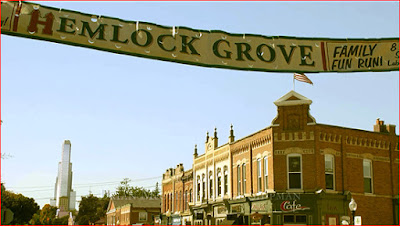 The episodes I watched seem to embody the notion, oft-seen in noirs that though you may be done with the past, but the past is not done with you.

The past, in some sense, is the “real” monster portrayed in the series.

The younger generation, though embodied literally by vampires and werewolves, seems like Hemlock Grove’s best hope for a better future.

The friendship between Peter and Roman is intriguing, and it doesn’t progress predictably, which is a quality I appreciated very much.

Roman, for example, learns that Peter is a werewolf, and asks to watch him transform.

Peter -- for reasons not entirely known even to himself -- agrees.There’s a certain homo-erotic tension in the relationship overall, but certainly in that moment of transformation, featured in episode 2, “The Angel.” There’s an electric feeling of discovery between the two characters, and it isn’t exactly platonic.

Instead, Roman watches, wide-eyed, as Peter strips down nude, and the transformation occurs. 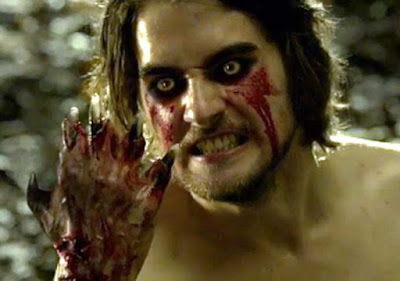 That equation probably sounds like it could be terrific, but the pace and plotting are so damn languid.

Individual moments are spiky and weird and memorable, but overall the series feels like it is on David Lynch-styled cruise control or automatic pilot, only without benefit of Lynch’s guiding intellect or strange sense of humor. The series even flirts with his trademark "dream sense," but again, it feels applied haphazardly.

Two things result from the series’ off-kilter nature, I reckon.

One, Hemlock Grove doesn’t feel teeny-bopperish, as one might legitimately fear, considering the milieu. The show is many things, but the vampires aren’t glittery, and the werewolves aren’t mere boy toys.

The other result is that Hemlock Grove feels off-putting and impenetrable at times -- at least as far as I got into the continuity. I found this approach distancing.

Hemlock Grove ended after three seasons of about a dozen episodes per year, and my understanding is that those who stuck with it really enjoyed it.

That's as it should be.

For me, the episodes that I watched had some great promise, some amazing scenes, and a hell of a lot of weirdness for, apparently, weirdness sake.

Not your average destination spot, but a little too bizarre and sleepy for my tastes.