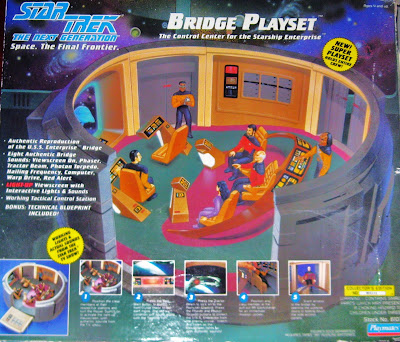 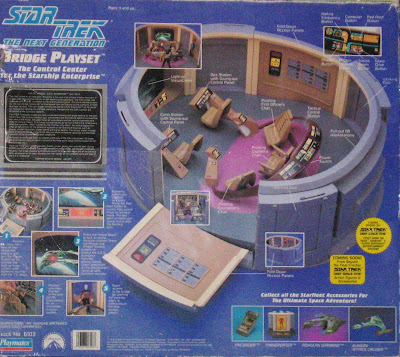 As a kid, the one toy that I really, really wanted (besides a Moonbase Alpha for Space:1999 action figures...) was an relatively authentic recreation of the starship Enterprise bridge.  Back in the 1970s, Mego had created the widely-remember "action playset" of the original U.S.S. Enterprise bridge (replete with "Spin Action Transporter") but the detailing of the bridge was far from accurate.

In 1979, Mego made a second attempt, creating a toy of the Enterprise bridge from Star Trek: The Motion Picture.  It was somewhat more accurate than its predecessor, and yet manufactured from this horribly light plastic.  Worse, all the controls were simply decals that easily came off, or might be applied crookedly.

But finally, in 1993, Playmates created the Star Trek bridge playset that kids like me had long dreamed of.  Unfortunately, by then, I was an adult. 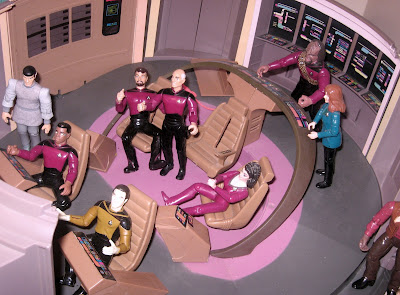 Regardless, Playmates offered this  "super" play-set of the NCC-1701-D bridge.  This huge toy -- the "control center of the starship Enterprise" -- was, by far and away the most accurate representation yet of any Star Trek bridge.

And gosh darn it, it wasn't for Kirk's era.

Still, I wasted no time purchasing this toy to go along with my ever-increasing collection of Playmates figures.

As you can see from the photos, this bridge toy is an "authentic reproduction" of the set featured on Star Trek: The Next Generation for seven seasons.  It features a light-up view screen that reveals a Romulan War Bird in close proximity, plus "swivel" panels and "pivoting" chairs for the crew.  There are even "pull-out" seats for the "aft workstations."  Another nice feature was that that this toy came with "Technical Blueprints" of the bridge, which was nice for -- ahem -- collectors.

This bridge playset deviates from the TV show only in the features added to Worf's security station.  Here, an array of push-buttons have been added to recreate sounds from the program.  These sounds include "hailing frequencies," "red alert," "tractor beam," "warp drive," "photon torpedoes" and "computer."  I always suspected Worf could run the whole ship himself, but here was the evidence. All the other stations were...superfluous.

I was twenty-one when this toy was released in 1993, and thus could not spend days on end playing with it, as I would have liked.  In fact, my girlfriend (now wife..) and I had moved into our first apartment together in 1993 while she finished college and I tried to bring home the bacon.

Despite such responsibilities, I did play hookey from my job at the Supreme Court of Virginia for one day, and set up the bridge for action.