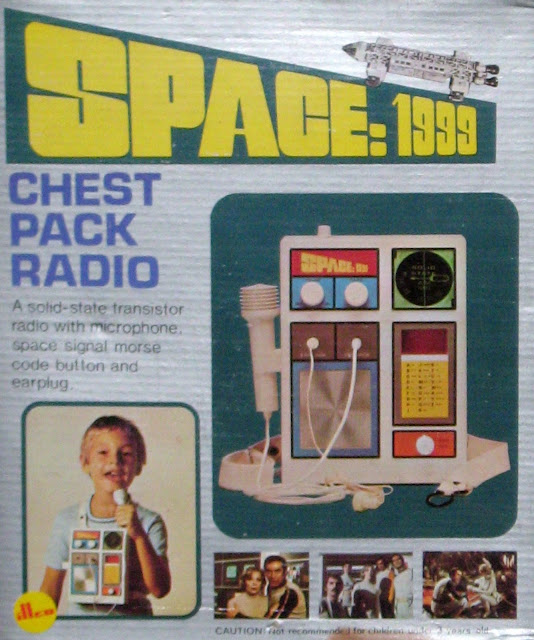 My love for Gerry and Sylvia Anderson's Space: 1999 (1975 - 1977) began when I was five years old and while the series was still broadcasting on WPIX, Channel 11 out of New York.  Even today, I vividly remember the abundant toys, books and model kits from the TV series dotting the aisles of local toy stores, particularly Newberry's in Verona, N.J.

My parents -- indulgent sorts that they are -- always made certain I was equipped with eagle spaceships, Mattel action figures, Power Records, H.G. Puzzles and the like.  Most of these Space:1999 items still hold cherished positions in my home office today.  Some of them, as you can guess, are pretty well played out after thirty-five years.

Another Space:1999 toy I vividly recall was the Illfelder Toy Company's Chest Pack Radio (style no. 37-2070).  As the box reads, this was a "solid-state transistor radio with microphone, space signal morse code button and ear-plug."   In design, this ATV-licensed toy is made to resemble the Alphan space suit chest pack.  It straps on over the shoulders, and is worn across the torso.  It takes four C size batteries to operate properly.

With the microphone you can "Broadcast your voice or sing along with your favorite tunes.

With the "Space Signal Button" you can "send real morse code messages."

And with the ear plug you can engage in "private listening."

So in other words, this is really just a sort of kid's radio, only styled and packaged to seem futuristic.  It's similar to Mego's Star Trek Command Communication Console in concept, I suppose.  The toy likely wouldn't seem too thrilling to today's kids, I'd wager.  Precision tuning dials? Volume controls? Ear plugs?  I mean, whoo-hoo, right?  Today we sleep next to tiny alarm clocks with many of these features...though personally I'd like them better if they also included "red alert lights."

But back in the 1970s (the decade of the CB radio, lest we forget...), this kind of toy was absolute nirvana...and state of the art.

The future of the year 1999 perhaps wasn't as fantastic as Space:1999 predicted, but thanks to toys such as this Chest Pack Radio, the seventies were certainly pretty awesome for sci-fi kids.
at September 13, 2012