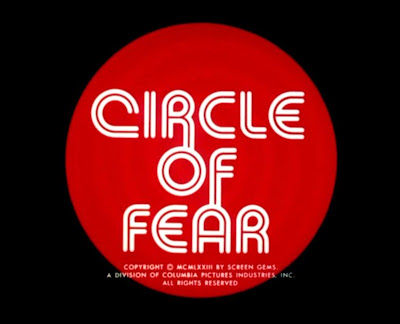 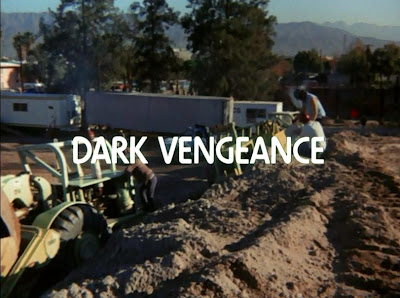 (Note: I've decided to skip the episode "Death's Head" because I've reviewed it here on the blog before.)


One of the oddest qualities about Ghost Story/Circle of Fear is that it is a TV series of such wild extremes.  When it is bad…it’s really, really bad.  But when it’s good, the series can absolutely hit one out of the park.

“Dark Vengeance” is a Circle of Fear episode that hits one of the park.

Written by Peter L. Dixon, this episode stars Martin Sheen and Kim Darby as a happily married couple – Frank and Cindy -- that intersects, unexpectedly, with inexplicable horror.  Sheen plays a construction worker who unexpectedly digs up a crate from a work site.  Frank is reluctant to open the sealed-up, old crate, but does so on the urging of co-workers and his wife.

He finds inside a miniature old rocking horse. 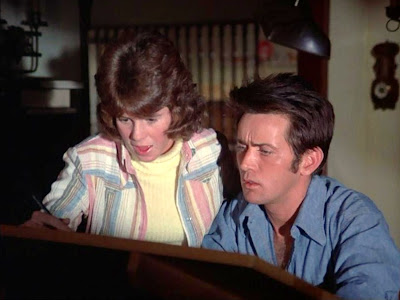 This discovery doesn’t sound especially chilling, but Darby’s character, Cindy begins to experience nightmares of the rocking horse growing to elephantine-size and trampling her.  And worse, the rocking horse boasts this unfortunate habit of moving about of its own volition.

Soon, the unfortunate couple realizes that the rocking curse is exercising an old revenge curse upon them based on an incident from Cindy’s long-forgotten youth.  But the horse keeps growing in dimensions and develops devilish red eyes.  It is relentless.

Finally, Frank discovers the key to trapping the rocking horse involves the crate where it was found, and a mirror…

On paper, this whole story sounds utterly ridiculous: a couple is haunted by a tall rocking horse.  And yet, I’ve learned from long experience with the genre that horror stories sometimes work best not on a logical or rational level, but on a surreal level that I term “anti-sense.”

For lack of a better word, it’s all about nightmare logic.  Consciously we may be able to shrug off the absurdities, but “Dark Vengeance” taps into all these lurking anti-sense fears.  They include fear of inanimate objects, fear of toys, and fears of being in a never-ending chase. 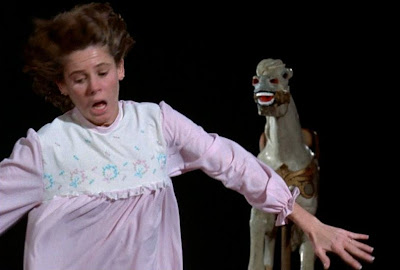 “Dark Vengeance” unfolds like a very bad dream indeed as the couple is menaced beyond reason and beyond rationality by the malevolent hell-bent rocking horse.  It grows to huge size.  It rolls from their house to their workshop.  It escapes the pincers of a vise.  It even evacuates from a fire-place when Frank attempts burning it.

All this happens, and the threatened couple never thinks once of going to the police or seeking help from neighbors.  Instead, they are trapped in a bad dream, one from which they can’t awake, and one with precious few options for escape.

On this “anti-sense” level, the episode works really, really well.  There are no visual special effects to speak of to depict the horse in motion.  Instead -- for the most part -- the rocking horse simply shows up where we know it shouldn’t be…but where we secretly expect it and dread it.

Frank turns on a light in the garage work shop and there it is.  Cindy goes into her bedroom, and finds it lurking in a corner…just sitting there.  Somehow, the story is all the creepier because, most of the time, we don’t see the horse changing or moving.  The thing’s very presence is enough to evoke chills, and we are left to imagine its form and shape of transit. 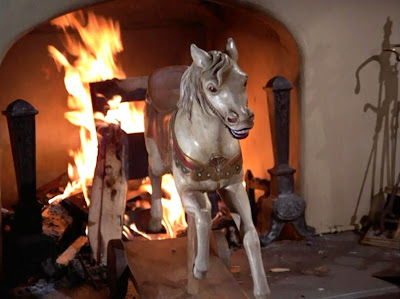 My wife and I watched this episode together a few nights ago, and we riffed on it a little, sort of shrugging off the funny 1970s fashion and touches.  The episode starts slow, to be certain. But by the twenty-minute point of “Dark Vengeance,” we were totally involved, and more than a little unnerved by the malevolent rocking horse.  The show just keeps plugging and plugging -- with a kind of insane sincerity -- and it breaks down rational resistance.

“Dark Vengeance,” like “Time of Terror,” goes right to the top of the Ghost Story/Circle of Fear episode catalog.  It shouldn’t work at all, but it really does.  Don’t watch “Dark Vengeance” alone, or with the lights off…

Next week on Circle of Fear: another incredibly unnerving, original and unsettling installment, Harlan Ellison and D.C. Fontana’s “Earth, Air, Fire and Water.”
at September 09, 2012