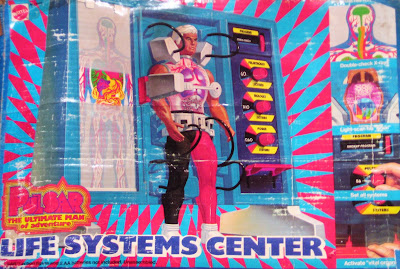 In the year 1976, toy companies across the U.S.A. rushed to compete with Kenner's super-successful The Six Million Dollar Man toy-line.  Mattel, for instance, devised PULSAR, "the ultimate man of adventure." 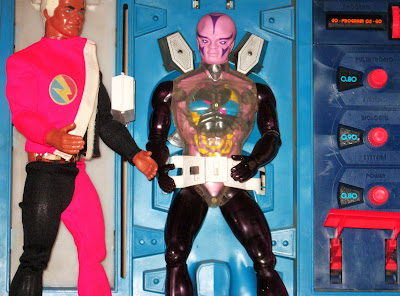 About the same size as the Steve Austin figure, PULSAR came outfitted in a nifty red and black uniform, but when you took off his shirt you could see all of his chest organs -- heart and lungs -- pumping awat.

Also, PULSAR's head could flip-up, and different mission disks could be inserted into his brain.

PULSAR's enemy was the evil HYPNOS, and the hero's base of operation was this ultra-awesome Life Systems Center.

The packaging described this base as a "re-energizing and reprogramming machine" and it features an x-ray screen, a "power pak and scanner," a "brain probe light," a "mission programmer," "control dial" and "remote activator."  With the Life Systems Center you could double-check X-rays, "light-scan" PULSAR's brain, "set all systems" and activate "vital organs" (which always help on a secret mission, I guess.) 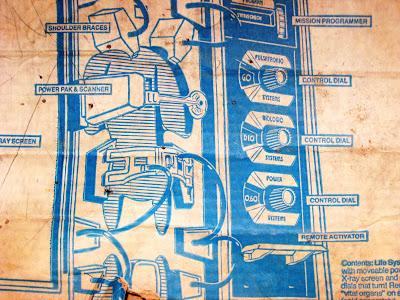 Designed for "ages over 3" this Mattel toy ran on 2 AA batteries (not included).  I still have PULSAR, HYPNOS and the Life Systems Center, though the center is missing many parts (including some tubing and the actual X-Ray screen).  Mine doesn't function at all, either, and as you can see from the photos, the box is pretty badly damaged at this point.

Still, I love the whole PULSAR line from Mattel, even though I'm not entirely certain what's so special or adventurous about a guy who shows off his internal organs for all to see, or can be controlled by a disk drive in his brain.

Email ThisBlogThis!Share to TwitterShare to FacebookShare to Pinterest
Labels: 1976, collectible of the week, retro toy flashback