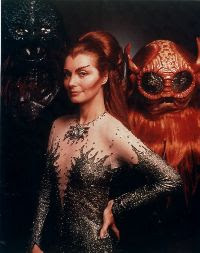 My new Space:1999 novel (after 2003's The Forsaken) is in the hands of editors and nearing production for publication (likely in 2012).
In the meantime, Powys Media has posted an interview with me regarding the new book -- The Whispering Sea -- which is set in the series Year Two timeline.
Here's a section from the interview.
Q: How did The Whispering Sea come about?
A: The Forsaken (2003) was well-received by readers and reviewers, and because of my long-standing affection for Space: 1999, I very much wanted to write another series novel for Powys. So the discussion quickly came around to what kind of story to tell for a second novel. This was also after I had written “Futility” and “A Touch of Venus” for Shepherd Moon. At some point, I developed a lengthy outline for a follow-up novel to Forsaken – a kind of indirect sequel – called Ordination, but then we shifted gears to go with The Whispering Sea…which, if I remember correctly, is a title that Mateo gave me. Ordination was more in line with Alpha and Omega, this kind of epic, galaxy-spanning tale about Maya being inducted into the “priesthood” of the Space Brains, and it just got too big. Mateo pointed me in another direction, and we did something more contained, more stand-alone with The Whispering Sea.
Q: The Forsaken is a “bridge” novel spanning the differences between Space: 1999 Years One and Years Two. Is that distinction also true of The Whispering Sea?
A: Actually The Whispering Sea is a bridge novel too. If you think about it, there’s a pretty wide gap between the end of “The Metamorph” and the beginning of “The Exiles.” Maya is already Alpha’s science officer in “The Exiles,” and she seems to already have an established relationship with Tony Verdeschi. So in The Whispering Sea, I’m bridging the gulf between those two episodes and dramatizing the story of Maya’s arrival on Moonbase Alpha. How did she get there? How did she come to fit in? How and why was it decided that she would become Alpha’s science officer? Those are the questions the novel covers.
I'll write additional updates about the book's release schedule as further details become available, and also post images of the book's cover art when it is complete.
at December 05, 2011