So, what's new with McFarland for June '06? Here's a quick look at their cinema and television releases for the month. Looks like some more good stuff from the N.C. reference book publisher... 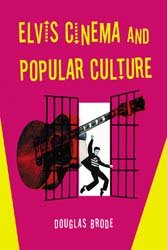 Elvis Cinema and Popular Culture-
Though Elvis Presley’s music is widely credited as starting a sea change in American popular culture, his films are often dismissed as superficial. Beyond the formulaic plotlines and the increasingly weaker songs, however, the films are rich with resonance to the changing times in which they were produced (roughly 1955–1970). They were also a means by which Elvis communicated deeply felt autobiographical material to his fan base, although in the guise of lighthearted escapist fare.

This work takes a new stand, maintaining that Elvis’s 31 Hollywood features and two documentaries reveal a profound statement from the star and auteur. Analyzing each film in detail and exploring the body of work as a whole, Brode reveals the Elvis persona as a contemporary Candide, attempting to navigate an ever changing social and political landscape. 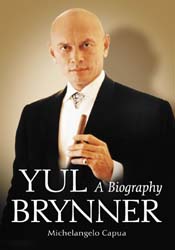 Yul Brynner-
Known as the bald cowboy in The Magnificent Seven and the sexy, charismatic male lead in The King and I, Yul Brynner was a Hollywood paragon of masculinity. Beyond his distinctive appearance and distinguished acting career was a life of intrigue and concocted tales surrounding his youth. Born Youl Bryner in Russia, he played gypsy guitar and worked as a trapeze clown until a severe injury motivated him to pursue his interest in theater.

This biography takes readers through Brynner’s formative years in Russia, France and China and describes his journey from sweeping stages in Parisian theaters to a versatile career in theater, television and film, reaching a stardom that began and ended with the classic Rodgers and Hammerstein musical The King and I. With accounts of his personal and professional successes and failures, the book includes his four marriages, his numerous and notorious affairs with such stars as Judy Garland, Joan Crawford and Ingrid Bergman, and his 1985 death from lung cancer. A filmography details his movies and plays, and appendices outline his work in documentaries, music and soundtracks, radio programs and television. 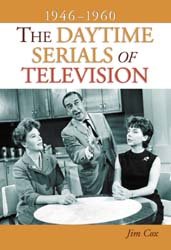 The Daytime Serials of Television, 1946–1960-
The popularity of soap operas on radio made them a natural for the new medium of television, where soaps quickly became an audience favorite. As television soap operas developed, so did the level of sophistication in delivery, writing and production. Even with technical difficulties, clashing actor egos, and hurried production schedules, television managed to corral a massive audience for the continuing narrative, which combined the excitement of the new visual medium with the old-fashioned pleasures of a story well told.

This history of television’s “golden age” soaps begins with an overview of earlier serialized entertainments that set the stage for the televised daytime soap. A detailed analysis of early TV soap stars, personnel and production follows, taking 40 programs into account. Ensuing chapters offer in-depth treatments of the serials Search for Tomorrow, Love of Life, The Guiding Light, The Secret Storm, As the World Turns and The Edge of Night. Appendices include chronological and alphabetical directories of period daytime serials and rankings of the durability of programs, actors and actresses, announcers and sponsors. 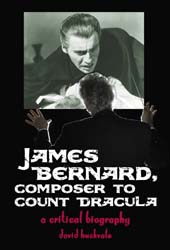 James Bernard, Composer to Count Dracula-
Composers give a unique and powerful voice to the stories we see on the big screen. Those who work principally with one type of film may leave a unique imprint on an entire genre. James Bernard was one such composer. From 1952 to the late 1990s he was one of horror’s definitive and distinctive voices, scoring many of Hammer’s best-known films, including Dracula.

This critical biography details Bernard’s life from struggle to success. More than just a biography, however, it is also a meticulous examination of his music, including its intricate mechanisms and the many sources of Bernard’s inspiration. Movie scores examined include The Quatermass Experiment, The Curse of Frankenstein, Dracula and The Hound of the Baskervilles. Reviews of Bernard’s work and reminiscences of the composer himself add depth and personal feeling to the biography. A music glossary and a filmography complete the work.

Obituaries in the Performing Arts, 2005-

The obituaries of these and other performers and filmmakers, musicians and producers, dancers and composers, writers and others associated with the performing arts who died in 2005 can be found in this comprehensive reference work. Each entry provides the date, place and cause of death, along with a brief recap of the person’s career and citations from major newspaper and periodical stories reporting the death. Filmographies are given for film and television performers, and many photographs are included. Volumes in this annual series are available dating back to 1994. A subscription plan is available for future issues.

From the Roman Praetorian Guard to the English shire-reeve to the U.S. marshals, lawmen have a long and varied history. At first, such groups were often corrupt, guilty of advancing a political agenda rather than protecting citizens. It was about the turn of the twentieth century that police officers as we know them came into being. At this time, a number of police reforms such as civil service and police unions were developed. Citizen committees were formed to oversee police function. About this same time, the technology of motion pictures was being advanced. Movies evolved from silent films with a limited budget and short running time to films with sound whose budget was ever rising and whose audience demanded longer, more complex story lines. From the infancy of moviemaking, lawmen of various types were popular subjects. Bounty hunters, sheriffs, private eyes, detectives and street officers—often portrayed by some of Hollywood’s biggest names—have been depicted in every conceivable way.Compiled from a comprehensive examination of the material in question, this volume provides a critical-historical analysis of law enforcement in American cinema. From High Noon to The Empire Strikes Back, it examines the police in their many incarnations with emphasis on the ways in which lawmen are portrayed and how this portrayal changes over time. Each film discussed reveals something about society, subtly commenting on social conditions, racial issues and government interventions. Major historical events such as the Great Depression, World War II and the McCarthy trials find their way into many of these films. Significant film genres from science fiction to spaghetti western are represented. Films examined include Easy Street (1917), a nominal comedy starring Charlie Chaplin; Star Packer, a 1934 John Wayne film; The Maltese Falcon (1941) with Humphrey Bogart; Dirty Harry, a 1971 Clint Eastwood classic; Leslie Nielsen’s spoof Naked Gun (1988); and 1993’s Tombstone featuring Kurt Russell. The filmography contains a synopsis along with information on director, screenplay, starring actors and year of production. Photographs and an index are also included. 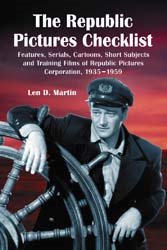 Republic Pictures Corporation, began as a motion picture laboratory in 1915. By 1935, Republic had become a studio and released its first movie, Westward Ho! starring a young John Wayne, who would stay with Republic for the next 17 years. Republic would go on to produce highly successful Westerns starring singing cowboys Gene Autry and Roy Rogers as well as serial adventure series. The studio cranked out so many exciting (not to mention money-making) serials that it became known as “The Thrill Factory.” Occasionally, Republic would produce and distribute “A” features, such as Macbeth and The Quiet Man, but it was the “B” Westerns and adventure serials that they knew best how to produce and market. Until its demise in 1959, Republic fed hungry moviegoers with a steady diet of “B” Westerns, serials, dramas, series pictures and musicals.

The Republic Pictures Checklist provides a full listing of Republic releases, with plot synopses, release dates, alternate titles, chapter titles and awards. All of Republic’s output, including documentaries and training films, is included.