In “Conquerors of the Future,” the Legion of Doom becomes the Legion of Good, vexing the Super Friends. The evil villains perform a number of good deeds, but then execute a trap for our heroes from the Hall of Justice.

Specifically, the Legion travels 10,000 years into the future, and helps an evil barbarian called the “Barlocks” overtake the last vestiges of humanity.  But the Super Friends also travel forward in time, and read from a history book about the Legion of Doom’s plot. Thus, they are able to travel back in time to stop it. 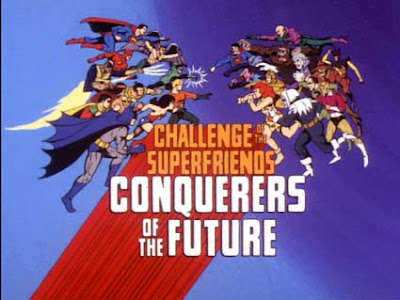 “The Barlocks” of “Conquerors of the Future” are clearly an homage to (or rip-off of, depending on how generous you are) of the Morlocks, the malevolent future race in H.G. Well’s The Time Machine.  In fact, this whole episode is a variation on that oft-told story, with time travelers finding humanity on its last legs, endangered by predators, in a distant future.

This derivative nature seems to be par for the course in this run of Challenge of the Super Friends episodes. A previous episode (“Revenge of Gorilla City”) was a Planet of the Apes (1968) knock-off, and “Swamp of the Living Dead” had Romero-esque overtones (age appropriate, of course.) 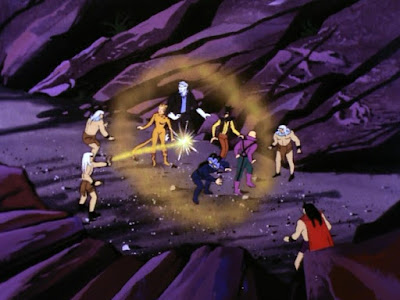 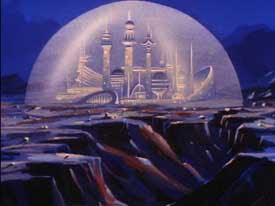 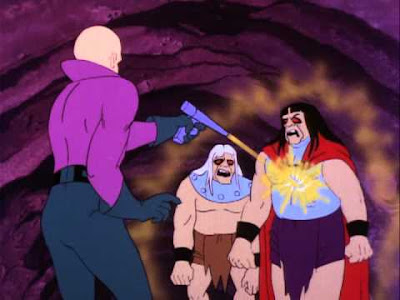 Beyond the derivative story, “Conquerors of the Future” features a drawback that many episodes of this series share. The writers have the lead characters announce -- exhaustively -- what they are doing, even as they are doing it. When Superman attacks a mutant spider, for instance, the character intones” My super-strength will stop this futuristic spider!”

Yes, Superman, we can see that!

I can only guess that the constant reinforcement through dialogue of plainly visible and apparent action on screen is a result of this series’ nature as a Saturday morning series. I suppose that children sometimes were looking down at their Cheerios, and not up at the screen, and needed to be filled in on the action.

But boy, does this approach add to the lameness quotient of the series today.