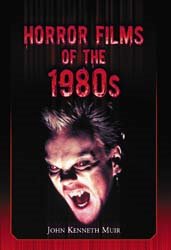 Yep, it's almost here. The long-awaited sequel to one of my most popular, critically acclaimed and widely-read books (Horror Films of the 1970s).

I toiled long and hard on this one, and hope you'll give it a gander. The stats: 328 movies covered; almost 200 photographs; a dozen interviews; eleven original illustrations. Tons of reviews, horror conventions (or cliches), memorable ad-lines, the 80s hall of fame and much more ghoulish, bloody fun.

This baby's up at McFarland, available now for pre-order. I'll let you know more about the street date, but it looks like this one might arrive in time for Halloween. I'm really excited about this book for many reasons. It's nice to "come home" in a sense, to horror, because I've been away since 2004's The Unseen Force: the Films of Sam Raimi.
Here's McFarland's book description:
John Kenneth Muir is back! His Horror Films of the 1970s was named an Outstanding Reference Book by the American Library Association, and likewise a Booklist Editors’ Choice. This time, Muir surveys 300 films from the 1980s. From backwards psychos (Just Before Dawn) and yuppie-baiting giant rats (Of Unknown Origin), to horror franchises like Friday the 13th and Hellraiser, as well as nearly forgotten obscurities such as The Children and The Boogens, Muir is our informative guide through 10 macabre years of silver screen terrors.

Muir introduces the scope of the decade’s horrors, and offers a history drawing parallels between current events and the nightmares unfolding on cinema screens. Each of the 300 films are discussed with detailed credits, a brief synopsis, a critical commentary, and where applicable, notes on the film’s legacy beyond the 80s. Also included is a catalog of the author’s “star” ratings for both 1970s and 1980s horror movies, as well as his ranking of the 15 best horror films of the 80s.
at July 06, 2006