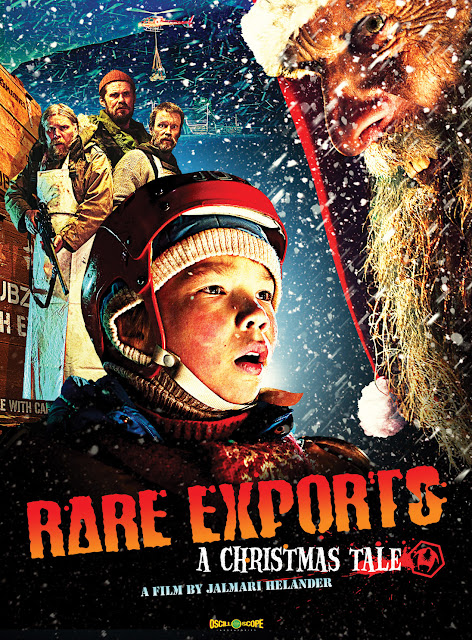 Santa Claus begins his yearly Christmas Eve journey before too long, and so it seems like an ideal time to remember a modern holiday-themed horror movie that I’ve come to consider a new classic: Rare Exports: A Christmas Tale (2010).

Like the best holiday-themed horror films, Rare Exports makes the most out of its premise by juxtaposing the “good tidings” and happy vibes of the holiday season with a far more cynical and sinister reality.

In this case, the horror in the scenario arises from the presence of an ancient Santa Claus demon, but also the fact that his arrival has caused economic blues for the film’s central family. That family, already dealing with grief, contends with a financial setback that could adversely impact it for a year.

This economic element of the narrative is crucial to the film’s success, and an acknowledgement of the fact that Christmas holiday has become tied, perhaps irrevocably, to commerce and capitalism.

Without enough money to spend, is a Merry Christmas even possible in this day and age?

Rare Exports also functions as a quirky coming of age tale, at least of sorts. The film’s young hero, Pietari, can no longer close his eyes to the reality of his life (or his father’s profession as a butcher).

Similarly, Pietari forcibly has his young eyes opened to the true nature of Santa Claus as a monster that dispenses not gifts, but punishment for naughty children. Therefore, the Christmas holiday depicted in this Finnish film from Jalmari Helander is not one in which Pietari gets to remain a kid, but one in which he earns his father’s respect as an adult.

Although all of this analysis undoubtedly makes Rare Exports sound like a weighty polemic, the film is light on its feet, and extremely funny, too. The film’s horror is real, but leavened by the comedic elements.

“The Coca-Cola Santa is just a hoax.”

A mining company working in the Korvotunturi Mountains in Finland discovers evidence of something buried deep within one rocky outcropping. Dynamite is utilized to blow up the mountain, but the explosion releases an ancient horror…the real Santa Claus.

In this case, Santa Claus is a giant horned demon, tended to by an army of mindless elves, really filthy, naked old men with long beards. These are Santa's Helpers.

A boy, Pietari (Onni Tommila) who lives with his father, Rauno (Jorma Tommila) suspects the truth; that a monster has been unloosed in town. Pietari is unable to convince his father of this fact, however, until after discovering that a herd of valuable reindeer have been massacred…and fed upon.

When one of “Santa’s Helpers” is captured, Rauno realizes that his son’s story is true, and that a dark force has infiltrated the town.

But it may be too late to stop Santa. All the children of the town -- save for Pietari --- have disappeared and been replaced with creepy straw dolls.

Now, Pietari and Rauno must save the children, destroy Santa, and stop the onslaught of Santa’s helpers.

One delightful aspect of Rare Exports is that it plays like a seasonal (and satirical) version of John Carpenter’s The Thing (1982). Specifically, something ancient and awful is awakened from a long slumber beneath the Earth’s surface, only to go on a reign of terror.  In both situations, the monster emerges (or nearly emerges) from a block of ice.

If The Thing shattered all of our happy illusions about friendly aliens in the summer of E.T. (1982), Rare Exports works to similar ends regarding Santa Claus, drawing on the character’s ancient origins as a figure of menace and mischief.

As Pietari learns from his research (a book called The Truth about Santa Claus), The Coca-Cola Santa is a figure of rational, capitalist modernity, a figure designed to sell products.

The truth, according to the film, however, is that Santa is something much more sinister; something that possesses a hatred for children and takes glee not in rewarding them, but in hurting them.

All the children in the town are abducted by Santa’s minions, which means that all have been classified as “naughty.”  Pietari realizes that he too is vulnerable, or naughty (because of his actions cutting open a fence near the mountain).  By recognizing his own bad behavior, Pietari also realizes a human truth.

There isn’t one of us who isn’t naughty occasionally, at least by Santa’s standards.

Again, this is a crucial piece of Pietari’s coming of age; his viewing of the world in an adult, or mature way, separated from the fantasy and simple-mindedness of fairy tales. 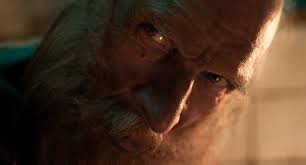 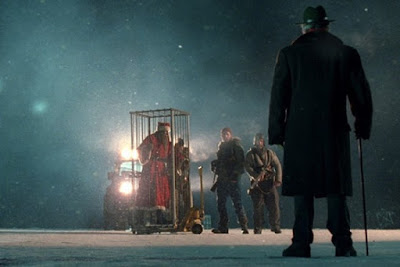 Pietari’s distinctly un-romantic discovery of the truth is mirrored by the film’s unromantic approach to traditional Christmas symbolism.

A beautiful field of snow is marred by the carcasses of 433 massacred reindeer, for example.  When the dead animals are first seen, one of Rauno’s co-workers notes, cynically “Merry Christmas.”

He is upset, however, not because the beautiful animals – which in mythology pull Santa’s sleigh -- are dead.  No, he is upset because “85,000 dollars” of merchandise have “rotted away.”  The butcher and his co-workers were going to sell reindeer meat for the holidays. Now their livelihood is threatened.

Pietari, who has closed his eyes to what his father does -- working as a butcher -- opens his eyes to everything in the film. He opens his eyes to economic realities, and the reality of Santa Claus as a monster.  He sees that the “whole Christmas thing” is “just a bluff” to enforce good behavior on the part of children. He takes responsibility for himself, for his father, and for ending the threat posed by Santa Claus.

He fights to save his fellow children, blow Santa Claus to kingdom come, and harness the minions of the demons as an economic boon to his family. These minions are trained to be “Coca Cola” Santas and shipped, world-wide, to serve happy children.

It is no coincidence that the barn holding the giant demon, Santa, is marked in the same way that Pietari’s holiday advent calendar is. But on the final day of the holiday -- on Christmas Day -- Pietari does not open presents like a child would. Rather his gift is his ability to perceive the “truth” of the world.

He has opened not a sickly-sweet, sentimental token of childhood. He has opened up the responsibilities of maturity.

Rare Exports is a delightful film, with some moments of extreme violence. For the most part, however, the horror is merely suggested through its aftermath. The field of dead reindeer is one example, and the wolf pit trap (which snares a minion) is another.

Although we never see Santa in action since he is locked in a block of ice, the early sections of the film -- which recount the ancient legends -- do a terrific job of instilling fear not only in Pietari, but in the audience too.

A great Christmas horror film like Krampus (2015), Gremlins (1984) or Rare Exports (2010) -- succeeds because it punches holes through the mythology of the Christmas season, and sees another truth instead, about the nature of the holiday in the modern era.

Rare Exports is so much fun, so sharp in its observations and humor about this most beloved of holidays that it is anything but the proverbial lump of coal in the stocking.
at December 18, 2018