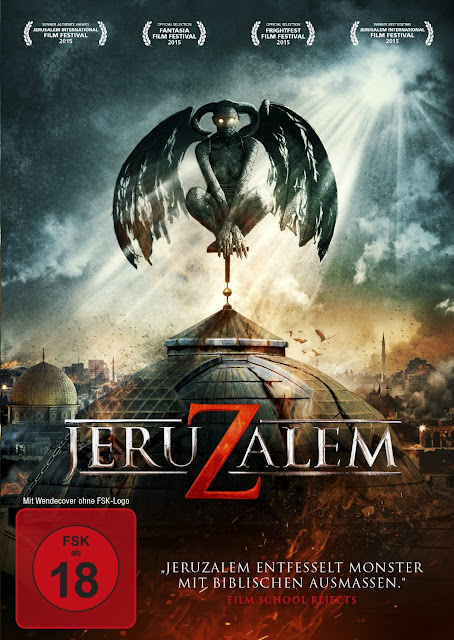 Now here’s an intriguing variation on the found-footage format. JeruZalem (2016) is an Israeli-made riff on Cloverfield (2008), except the giant monster here isn’t an extra-terrestrial in nature. Instead, this Beastie comes from religious beliefs.

Set and filmed in the city of Jerusalem at the dawn of Yom Kippur, JeruZalem colorfully chronicles a group of vacationing twenty-somethings there as a Gate to Hell opens, lost souls attack, and some giant demon/Satan-type creature -- only occasionally seen -- pulps the Old City.The tourists’ only hope of evacuating the quarantine zone is to evacuate Jerusalem through a subterranean passageway.

The second quality JeruZalem gets right involves the film’s lead character, Sarah Pullman (Danielle Jadelyn). This young woman spends the vast majority of the found-footage film behind the camera, which in this case is actually a pair of Google Glasses. What that means is that Sarah is our set of eyes, the camera-person, essentially, and so we often don’t see her.

Yet, miraculously -- given Sarah’s actual screen time -- she transmits as a fully-developed character.

JeruZalem also boasts a great, nearly miraculous final shot, especially given its low budget. Were it fifteen or twenty minutes shorter and a bit more tightly edited, JeruZalem would be a great horror film of its type, and not one that merely qualifies as good.

“There were signs coming…”

After her loving father presents her with a pair of Google Glasses, Sarah Pullman (Jadelyn) and her best friend, Rachel (Yoel Groblas) take a flight to Israel for a sight-seeing trip. Sarah hopes the trip will help her get over the death of her brother, Joel.

On the plane to Tel Aviv, Sarah and Rachel meet Kevin (Yon Tumarkin), a young man studying anthropology who is fascinated by the occult. He points out that all major belief systems -- Christian, Jewish and Muslim -- believe in demons and the undead.

Kevin convinces the young women to change their itinerary and travel with him to Jerusalem instead of seeing Tel Aviv first.

In Jerusalem, the tourists meet Omar (Tom Graziani), who works at their hostel. Together they all see the Damascus Gate, the Wailing Wall, and Solomon’s Quarries. At the Wailing Wall, Sarah leaves a letter asking God to bring back her dead brother.

Kevin, meanwhile, grows increasingly disturbed, experiencing a sense that something terrible is going to happen in the City.

His ominous prediction proves correct. As Yom Kippur commences, strange forces attack the people of Jerusalem, and the Israeli Army quarantines the city.

Now Sarah, Rachel, Kevin and Omar must find a way to escape.

Two common criticisms of the found-footage film format involve the fact that movies of this type tend to feature cardboard or indistinguishable characters, and lack any sense of humor.

Rewardingly, neither objection proves true in the case of JeruZalem.

Let’s gaze at the film’s humor, first.  There’s a scene, mid-way through the film wherein Sarah takes off her glasses and beds Kevin at the hostel.

While they are busy stripping down on the bed, kissing, and beginning to have sex (under the watchful eye of Google Glass), an app opens up on the device.

It’s Sarah’s Dad attempting to reach her.  And while his young daughter is getting it on, he’s calling her “Pumpkin” and messaging about how she’s Daddy’s “good little girl,” and so forth.  It’s a funny juxtaposition.

Another joke also succeeds in garnering a chuckle. When Sarah first gets her Google Glass at home in the U.S., she opens an app called “Die Zombie Die” in which she kills off staggering ghouls with a sword.

In the film’s last act -- set in the subterranean caverns -- she ends up with a sword-in-hand, killing off the winged-demons/fallen souls in much the same fashion.

On the other hand, Sarah proves a bit too impulsive with that sword...

The first moment described above (the juxtaposition between lusty sex and a Dad’s infantilizing messages…) is a bit stronger than the video game/real life comparison later on, simply because nobody comments on it.

Sarah almost kills the second joke by noting “it’s just like a video game.” That’s a line that, with tighter editing, could be omitted. Smart viewers will catch the visual connection between scenes without the character hitting it on the nose or telegraphing it.

Still, it’s rewarding that this low-budget horror film takes the time to make such jokes, and to tell those jokes through visualization and imagery.

Additionally, I admire how the film keeps Sarah in the mix as the lead character, even though she is actually on-screen far less than are either Rachel, Kevin, or Omar. Through adroit camera-movement sand choice of shots, we come to (wordlessly) understand  Sarah's grief over her brother’s death, and her commitment to rescuing Kevin from an asylum in Jerusalem. I don’t want to spoil the climax, but even when she is “merely” our eyes, the viewer gleans a strong sense of Sarah, who she is, and what she endures.

The film’s final shot is also amazing, as it involves an ascent into the sky, and a view of Jerusalem as, literally, all Hell breaks loose. This shot helps the film achieve a sense of scope that is breathtaking.

As for the shots of Satan, or some other giant Demon wandering the City, these moments are infrequent, and the effects may not hold up to great or intense scrutiny.

These moments aren’t bad, necessarily, and the editor does everything within the realm of possibility to make our views of the monster brief. Cloverfield is clearly the model in this regard, and as you may recall, there we mostly saw only bits and pieces of the giant monster, at least until movie’s end.

JeruZalem, by contrast, doesn’t feature a visual a pay-off regarding its giant, only the swirling mass of undead rising from the opened Gates of Hell.

Another element that JeruZalem cribs from Cloverfield is the idea that the smaller threat (either alien lice, or the winged lost souls) carries a contagion that contaminates human beings. Their bite/scratch, in both cases, is terminal. Frankly, this is the least interesting aspect of JeruZalem, and the scenes involving this aspect of the threat are not particularly persuasive.

In the third act, this horror film runs out of steam a bit, and one is left with the impression that with a little judicious trimming, the whole experience could have felt more intense, more immediate. The movie runs about ten or so minutes too long, and tension has dissipated to the point that viewers may rightly fear they are a step ahead of the filmmakers.

Despite such concerns, I liked and enjoyed JeruZalem overall. I think the Paz film works best as a visceral, visual experience. The frame-within-a-frame nature of the presentation is less distracting than in efforts such as Unfriended (2015) or Nightmare Code (2015), for instance.

Also, the film's prologue -- of an occult event in 1978 -- is powerfully rendered. It actually likes like an old film, and not like a modern filmmaker's impression of an old film.

Finally, identification with the protagonist is strong throughout, and JeruZalem ends on a high note…literally.

It’s just too bad these considerable strengths aren’t enough to sustain the film's spirits for the full 94 minute running time.

Still, there's no "Fatal Error," to keep one from enjoying this latest addition to the ever-increasing Found Footage catalog.
at February 05, 2016