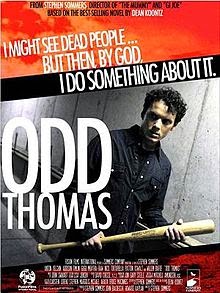 In terms of the horror genre, Hollywood doesn’t make many movies like Odd Thomas (2013) anymore, and that’s too bad.

In short: you might want to ignore the negative reviews about this film, a work based on the Dean Koontz novel.

Because Odd Thomas is a zippy, silly, smart and emotional horror movie that harks back -- stylistically-speaking -- to the mid-1980s and the bygone brand of horror films that combined heart, laughs, and thrills.

We still get a movie like this occasionally, not unlike Zombieland (2009), but generally not very often.

What’s changed?  Well, despite the glut of slasher films in the 1980s, many genre movies of the age didn’t feel compelled to cling so seriously to a hardcore sense of “gritty reality.”

Instead, many eighties horror movies celebrated, in a fashion, their own sense of artifice.

Another way to put it is that these older movies wanted to have a little fun on the way to scaring you to death.

Those thirty-year old efforts featured laughs and scares, and weren’t afraid to wear their hearts on their cinematic sleeves, either.

Odd Thomas is very much in this camp. It's like a good version of The Frighteners (1996), a horror film about a gifted or psychic individual and the ways that his interactions with the spirit world impact the living of his life.

But where The Frighteners was frenetic, and could never settle on any coherent set of rules for the denizens of the after-life, Odd Thomas is grounded and human.

Set in a quirky and picturesque town in California, and populated by a fine supporting cast that includes Willem Dafoe, and Patton Oswalt, Odd Thomas is also an affecting love story.

Perhaps most importantly, the film makes an affirmative case for the power of the individual to do good for the community. 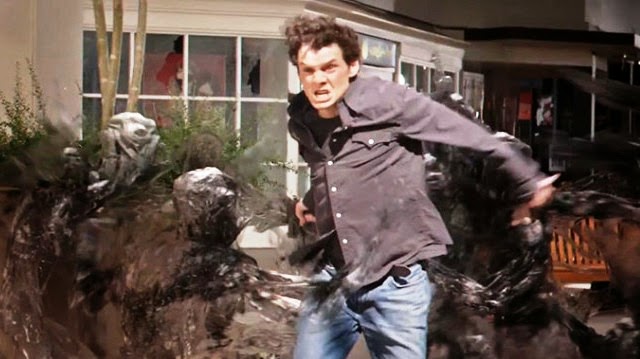 A young man named Odd Thomas (Anton Yelchin) lives in the sleepy little town of Pico Mundo and can communicate with the dead.

Because the spirits who contact him often need help or closure before they can depart the mortal coil for the afterlife, Odd is frequently involved with the police, and bringing criminals to justice. Odd’s dangerous side-occupation worries his devoted girlfriend, Stormy (Addison Timlin), but he assures her that they are “destined to be together…forever.”

When Odd begins experiencing bad dreams concerning the murder of a bowling team, and detects the presence of “bodax “--- “slithering evil beasts” from the other side that feed on carnage in our world -- congregating in Pico Mundo, he realizes that something terrible is destined to happen, and soon.

With Stormy’s help, Odd investigates the likeliest local suspect, a man named Fungus Bob (Shuler Hensley), who is hiding a secret about the nature of the violence destined for the unsuspecting town.

“Even in death, we have the pathetic need to be liked.”

The greatest virtue of Odd Thomas is its atypical and yet thoroughly entrancing protagonist.

Yelchin plays Odd with a high degree of charm and sensitivity, and the movie allows us to fully experience the character’s unusual world-view.

Odd is both strangely innocent and yet the most knowledgeable of all his colleagues and his friends.  He is both gentle and determined.  Odd is also both trapped in a dead-end job and working at the most important task any human could undertake.

Yet armed with “psychic magnetism,” Odd deliberately eschews the melancholy and angst of most horror movies psychics, and instead dives right into the action.

Odd can handle himself well too.

As he explains in a voice-over early on, Odd realized -- upon reckoning with his gift -- that he needed to be able to defend himself from bad people.  One fun scene in the film involves a chase and room-to-room fight scene between Odd and a man who has gotten away with murder.

Odd more than holds his own in the scuffle, though the décor ends up worse for wear…

Odd’s penchant for action over navel-gazing not only grants the film a strong sense of pace and momentum, it permits Odd Thomas’s overriding philosophy -- about action being preferable to inaction -- to shine through.

Similarly, Odd’s line about seeing “dead people” purposefully reminds audiences of the lugubrious (though wonderful) The Sixth Sense (1999), and then, rather actively, repudiates that approach.

Odd sees dead people, but he doesn’t let it paralyze him.

He has two choices.

Do nothing…and someone will absolutely die.

Or he can do something -- perhaps the wrong thing -- and have a shot at saving that someone, or otherwise making things better.

Instead of succumbing to paralysis, Thomas acts, and acts decisively.  And that, in a sense, is the character’s curse as well as his gift. When he acts, he finds that his actions have negative as well as positive consequences.  But the alternative -- to do nothing -- would have be far worse.

The film’s final moments, in which Odd makes a big change in his life, and faces a new and daunting challenge, suggest that we all have power to make things better, but that we must have the will and discipline first to act. And we must accept that with any endeavor we risk failure.

Thus it's entirely possible to view Odd Thomas as a "coming of age" film, perhaps, about a hero's journey towards self-realization. I've been very critical of big-budget superhero films of late, but in a way, Odd Thomas is actually a perfectly-realized version of the Marvel Spider-Man story, though you'll have to see the film to fully understand that analogy.

In short, Odd Thomas is about a smart, lovable, slightly-awkward boy reckoning with responsibility, and the grievous loss in his life that forces that reckoning.

Odd Thomas even makes an intriguing case about evil.

Evil isn’t, necessarily, a supernatural thing, according to the film.

Rather, evil arises in Odd Thomas from a human belief system about the supernatural.

That’s a distinction with a real difference, and Odd Thomas’s final act concerns the most frightening “boogeymen” prowling modern America: psychopaths loose in the public square with the will and weaponry to do catastrophic damage.

These are the true "monsters," and the film carefully diagrams the differences between this human brand of ugliness and the kind represented by the "bodax," parasitic monsters that feed on carnage.

The parasites, at least, are responding to their biology, unlike the spree killers.

These spree killers are also defined in the film as Satan worshipers, though the audience never learns any specifics of that worship.  Still, Odd Thomas suggests that humans kill each other over different ideas and ideologies...points that are ultimately unimportant. 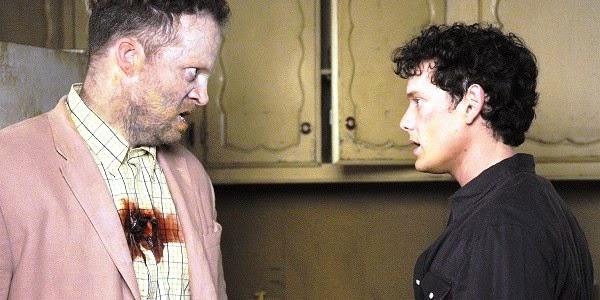 This is another strong contrast to the Bodax, who seem far more like animals, or other natural predators. The spree killers, because of their beliefs, choose murder, whereas the Bodax don't really seem to choose their (parasitic) nature.

I also admired how Odd Thomas plays with its love story. A fate that includes being together "always" doesn't necessarily include a long life on this mortal coil, and that's the brutal little "asterisk" next to Odd and Stormy's relationship that comes to define Odd as a human being and as a hero.

I hope I haven't made Odd Thomas sound gloomy or dark, because the movie plays lightly with all of its ideas, and veers from comedy to action to horror with an aplomb I haven't seen since some of the best episodes of Buffy the Vampire Slayer (1997 - 2002).  It's a jaunty movie that, reflecting its subject-matter, seems to love life with a passion.  While watching the film, I kept thinking that this light, comic, romantic approach was the very thing that the Fright Night (2011) remake so egregiously lacked.

The key to Odd Thomas's sense of humor rests in character, and Odd's unique perception of the world. That view is funny and fresh, and in the end, absolutely heart-breaking too.

If you are willing to countenance a horror film that doesn't take itself so damned seriously, but which nonetheless has a lot of heart, Odd Thomas is your man.