In "The Mermaid of the Serpent Sea," the Trobbits gather together a shipment of "power fruits" and "knowledge nuts" for the Mermanites of the Red Crown Reef.
They sail to the reef, but find that the gentle water dwellers have been attacked by a phantom ship and minion of the Overlord called Captain Typhod.
Typhod wants the shipment of fruits and nuts for himself and his master, and transforms the Mermanites into savage sea serpents.
Fortunately, Blackstar, Klone and Mara come to the rescue... 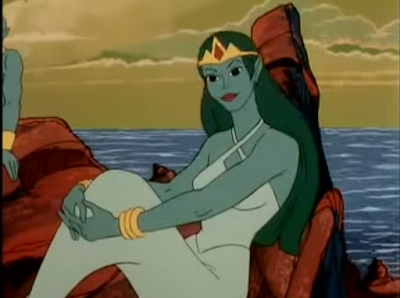 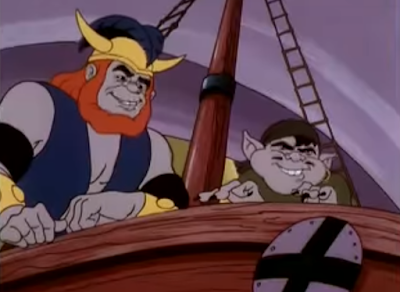 In this episode of Filmation's Blackstar (1981), audiences meet Typhod, another colorful minion of The Overlord. He's a nasty sea captain or pirate with a powerful ship at his command. The phantom ship can cloak during battle, and also fire teleporting beams at prey.  In other words, the ship's mast-had (shaped like a dragon), opens its mouth, and a beam comes out that captures victims, like the Mermanites. 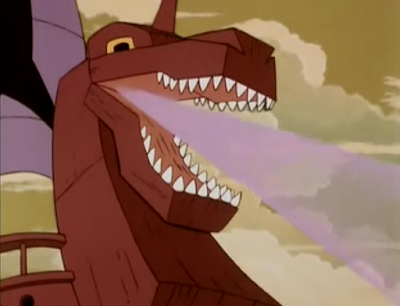 Blackstar goes up against that beam in "The Mermaid of the Serpent Sea," and I don't know if I've mentioned it before in these reviews, but his star-sword makes a bionic sound effect when in use.
Specifically, Blackstar re-uses the familiar sound effect from The Six Million Dollar Man (1973-1978). 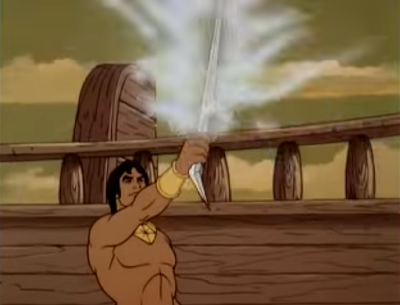 "The Mermaid of the Serpent Sea" also begins to explain why the Overlord places such a premium on controlling the Trobbits and their tree.  Their tree produces "power fruit" -- which enhances physical strength and power, and the humorously named "knowledge nuts," which augment intelligence.  So the tree is not just a home to the Trobbits, it is a source of power and energy. 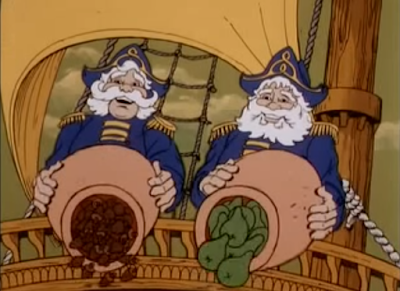 This is an enjoyable episode of Blackstar; one which develops the world and inhabitants sufficiently. For example, there is a nice flashback in the episode showing the crew of the golden galley defeating Captain Typhod in the past, and defending the Mermanites.
About the only negative quality I can tag about this episode involves Klone.  He has a prominent role, but the writers do nothing to develop his character.  Is this shapeshifter a one-of-a-kind like Deep Space Nine's Odo?
From a race that lives on Sagar?
Why is he allied with Blackstar and Mara? 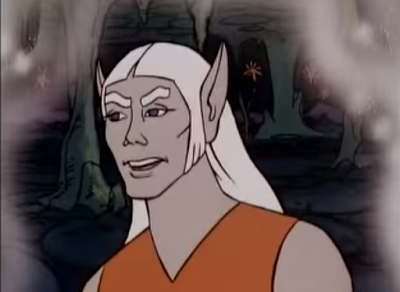 The character, while useful for his changeling abilities, has no depth at this point. We know nothing of his people, his personality, or even his governing philosophy (like Vulcans and logic, for example).
at September 18, 2021