In the Monsters episode “Jar,” a scheming femme-fatale named Ann (Gina Gershon) takes her mobster husband (Ed Kovens) with a weak heart to an out-of-the-way motel near a swamp in New England.
There, she finds that the owner of the motel, Mr. Hallett (Fritz Weaver) captures strange, homicidal swamp creatures and keeps them in pickle jars. He then sells the jars (and the creatures inside) for a high price.
Gina plans to use one of the creatures -- which can dissolve a human body in seconds -- to get rid of her mobster husband and live off his wealth while the authorities search for him.
Everything should go just according to plan, but an investigator named Bateman (Richard Edson) shows up at the motel in search of another missing person, and realizes what Ann is up to.
She attempts to seduce him, suggesting that he can share her husband’s wealth with her… 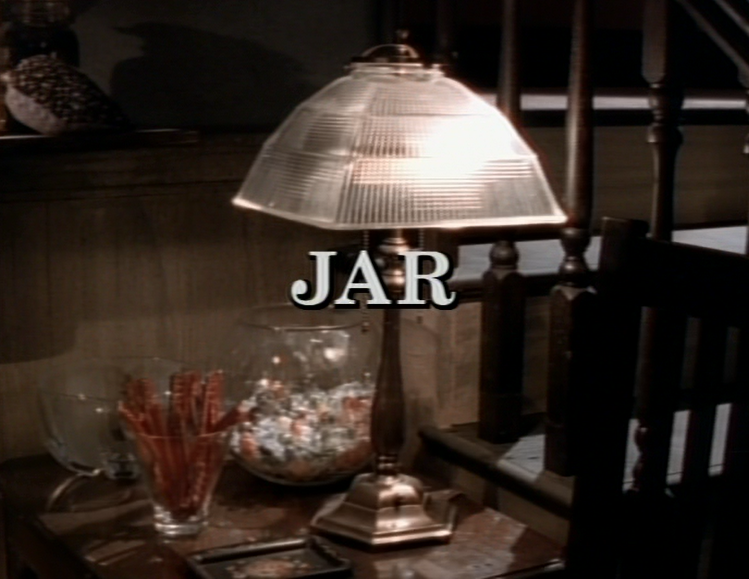 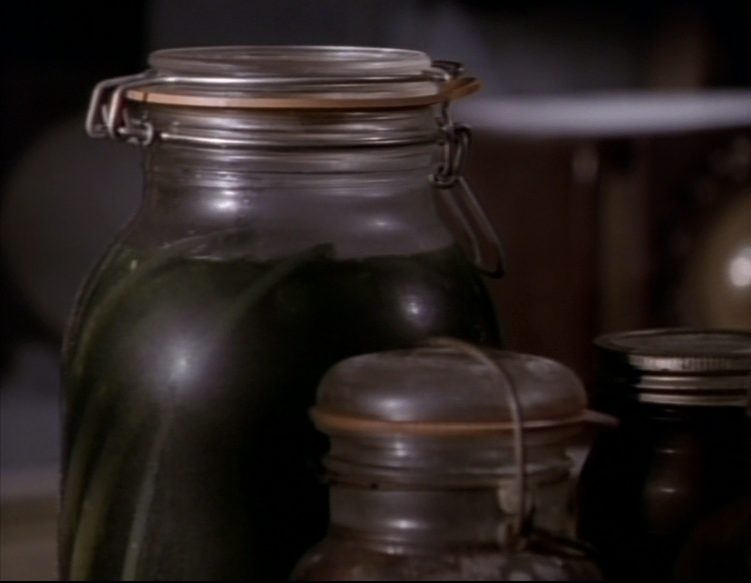 “Jar”, a second season installment, nicely reveals the elasticity of Monsters’ horror anthology format.
Some stories in the canon are straight-up horror, some are ironic comedies with social commentary, and this episode is a dedicated film noir, the story of a private dick, a femme-fatale…and murder.
Down to its shadowy, chiaroscuro lighting and textbook characters, “Jar” apes the film noir format.
We meet a jealous husband, a private “dick,” and even a “trapped” (and dangerous) woman trying to make her way in a man’s world independently. 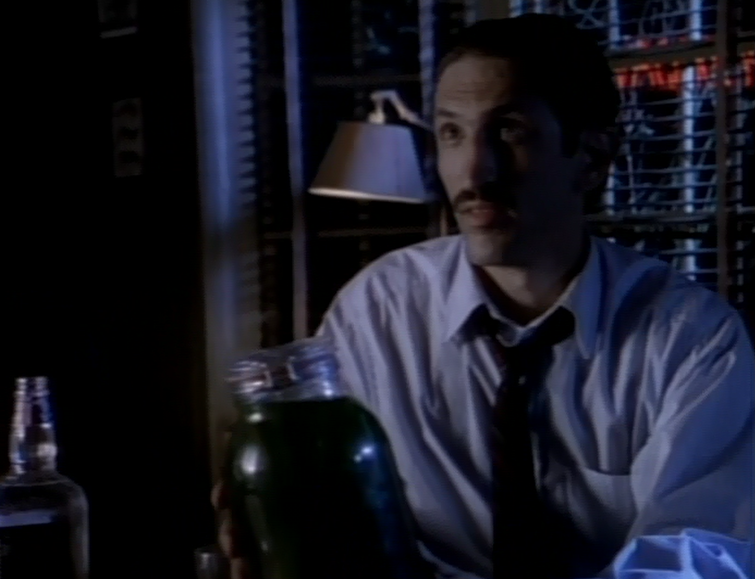 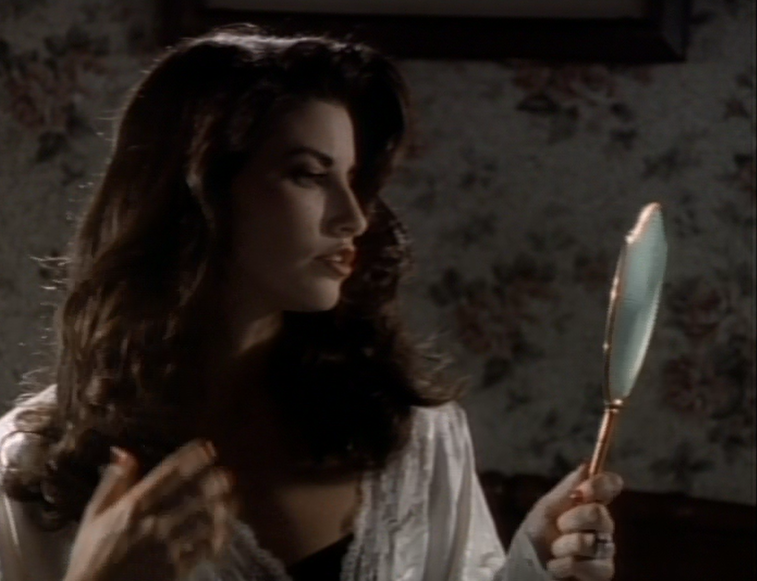 The story also features other film-noir trademarks, notably a pessimistic tone, and moral ambiguity. On the latter front, both Bateman and Ann leave the motel with a jar (and monster) intended for the other.
So much for true love, right?
The implication is that each lover is ready to kill again, and claim the stolen money.  The message: nothing matters more than money.
The hard-boiled dialogue here is occasionally stilted (“If I die, she’s cut off…bye-bye Golden Goose…") and yet in its own fashion it also harks back to the 1940s era of film noir, even if it could be a bit more accomplished.
The highlight of “Jar” for horror fans may not be the milieu it successfully apes, but rather the monster of the week. At about the twelve-minute mark of the episode, the pickle jar opens and a green, face-hugger-like thing leaps out and promptly eats/dissolves the mobster’s face.
It doesn’t stop there, either.
After the face is liquefied, the thing works its way down the neck and trunk of the body, leaving the husband’s clothes to wither and deflate in place.  It’s a show-stopping moment, and one of high suspense because the episode has built up to it for approximately half its running time.  Sometimes in horror, patience is really a virtue, and "Jar" has a nice pay-off with this gruesome scene. 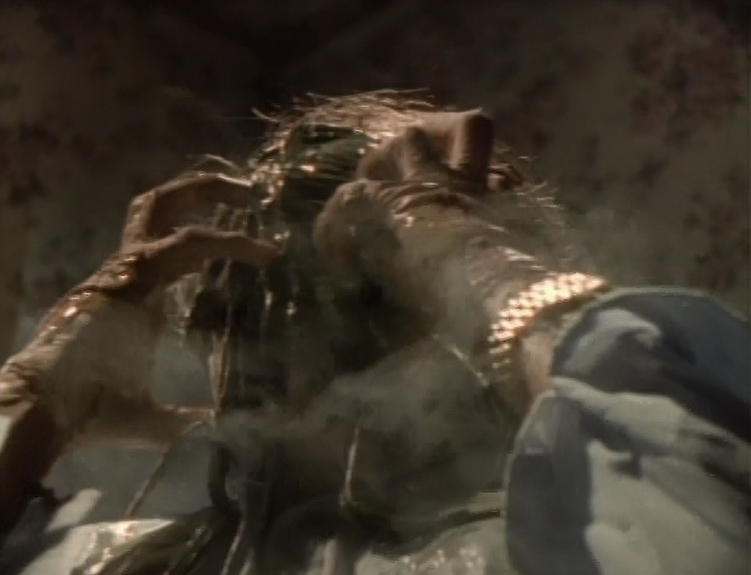 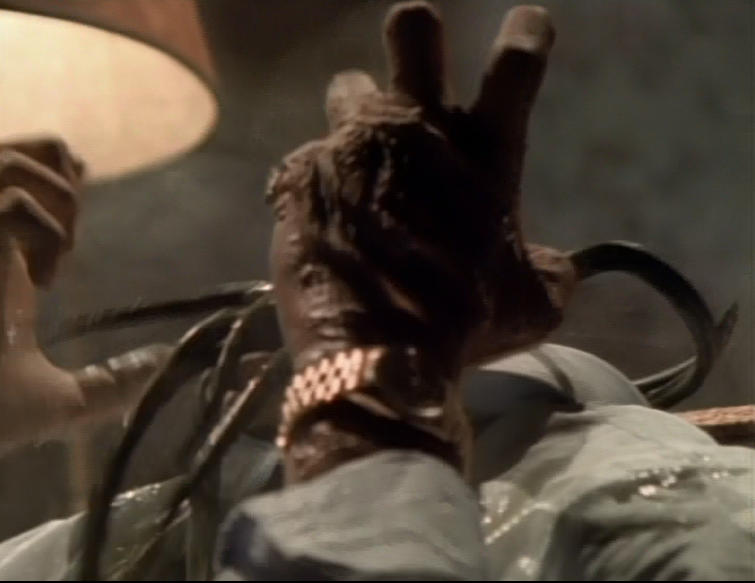 Wickedly effective here, as well, is Fritz Weaver who plays a taciturn motel owner, and keeps his cards close to the vest.
In keeping with the ambiguous morality of film noir, Hallett is not really depicted as being good or evil, just interested in making a buck and selling those jars. Again, we see that (the love of) money is the root of all evil.
at October 09, 2020