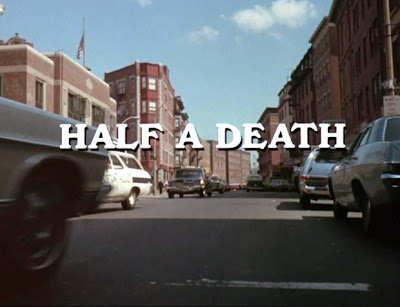 Ghost Story (1972) once more slips into mediocrity this week with the installment “Half-a-Death” starring Scream Queen Pamela Franklin (And Soon the Darkness [1970], The Legend of Hell House [1974]).
As is par for the course with this hit-or-miss 1970s horror anthology, this particular episode falters due largely to pacing and general series format.  There’s too little narrative development to fill out a full hour, and so the running time is padded out unnecessarily with repeat appearances by the “specter of the week.” 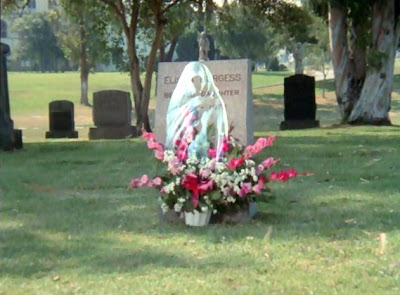 And each time the ghost re-appears, it seems a little less frightening.  By episode’s end, a feeling of dullness has replaced any genuine sense of terror.
The episode commences with our host, Winston Essex (Sebastian Cabot), walking the grounds of Mansfield House.  He begins to muse about the difference between being “alone” and being “lonely.”  The long and short of his epiphany is that some people may wish to be alone occasionally, but few people actually wish to actually be lonely.  He then wonders if a lonely soul can reach out from beyond the grave…
In “Half-a-Death” lovely Christine (Franklin) returns to her family home after living away in Rome when she learns that her twin sister, Lisa, has passed away.  Just days later, Christine’s father dies as well, and Christina’s scheming mother, Paula (Eleanor Parker) begins to grow close to a neighbor, Mr. Claiborne (Andrew Duggan). 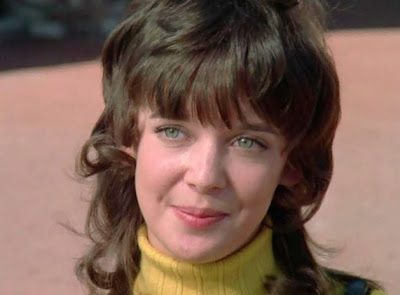 Christine soon finds herself haunted by the ghost of Lisa, a girl who spent her life in an insane asylum and suffered from arrested emotional development as well.  Christine recalls the old tale that twins share “one soul,” and wonders if Lisa is trying to take her life, or even make Christine experience “half a death.”
A visit from a medium (and charlatan), Miss Eliscu (Signe Hasso) confirms Christine’s worst fears.  Twins apparently are “single souls” indeed, sharing one spirit.  Deprived of a locket which protects her against the ghostly Lisa’s advances, Christine succumbs to her sister’s entreaties for company in death… only to see her mother finally step up and replace her.
“Alter-Ego” also involved a ghostly twin of sorts, and the idea that only one of the two could thrive, while the other would die.  It was a far superior meditation on the concept of doppelgangers and evil duplicates.  “Half-a-Death” is a weak retread, and fails to make sense even on a rudimentary level since Paula sacrifices her own life to her dead daughter, thereby giving Lisa half-a-soul too many.  I mean, if twins share a soul, that Elissa already has half.  And if she takes her mother’s soul, she has one-and-a-half, right? 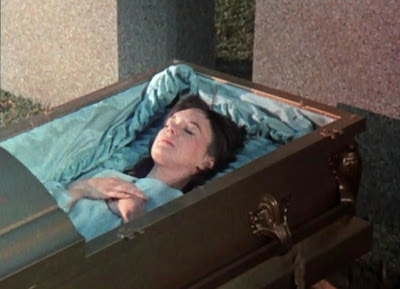 Basically “Half a Life” consists of long spells featuring the lovely (and talented) Franklin reiterating her feelings about Lisa, and her fear of the Corsican Brothers Syndrome to a would-be suitor, Ethan (Stephen Brooks).  Lisa’s ghost re-appears at least three times, and then the episode suddenly veers off on a bizarre tangent involving the medium’s delinquent son, and his attempts to rob Christine’s family because he feels his mother wasn’t adequately compensated for a seance.
It’s all a bad case of narrative meandering – call it Half-a-Narrative -- and more than enough to make one miss the crisp clarity of a Twilight Zone, a One Step Beyond, or even the Ghost Story contemporary (from Australia), The Evil Touch (1973).
at October 14, 2020