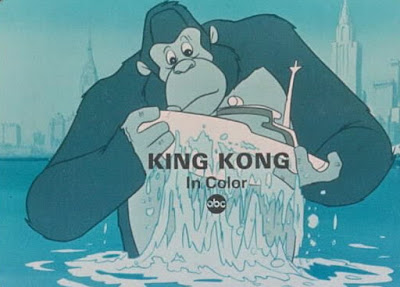 In the autumn of 1966, ABC TV first aired the American/Japanese co-production called The King Kong Show (1966).  The companies involved were Videocraft, and Toei Animation. Arthur Rankin and Julie Bass served as executive producers.

The series ran for 25 episodes, and was a sort of omnibus show. By that I mean that each twenty minute show featured three stories.  Two were devoted to Kong, and one was devoted to a different animated program called Tom of T.H.U.M.B.

As far as the premise goes, The King Kong Show saw the mighty ape of the movies transformed, essentially, into the friendly over-sized pet of the globe-hopping Bond family.  The family consisted of a father, Professor Bond (Carl Banas), a teenage daughter, Susan (Susan Conway) and a pre-teen boy, Bobby Bond (Billy Mae Richards).  Kong and Bobby were playmates, and especially close.  Bobby was too "young" to consider Kong dangerous, and so became his friend, instead.

Kong, meanwhile, was described as being "ten times as big as a man."

So the Bonds found Kong on Mondo Island, and took care of him, only to become involved in numerous adventures with the giant ape and those who sought to control or dominate him. The adventures concerned aliens ("The Space Men") the evil-mastermind, Dr. Who ("Dr. Who," "Rocket Island") and other challenges.  A supporting character, Captain Englehorn, came straight from the 1933 King Kong.

And, of course, elements of this cartoon re-appeared in the live-action King Kong Escapes (1967), particularly the character Dr. Who (visualized differently in the film), and the Mondo Island setting.

Here's a look at the famous theme song from the series:


Today, I'll look at two six minute segments.  The first is "The Horror of Mondo Island."  in this tale, the discovery of a "rare and important element" known as "Fantasium" -- which can make steel elastic and bendable -- brings a mining crew, and their destructive vehicles, to the island.

Seeing Kong's island paradise spoiled by strip-mining, Bobby warns the workers about "the Horror Mondo Island" in an attempt to scare the out-landers away.  He describes a monster that attacks by night, and then disguises Kong as the fearsome beast, painting him white. 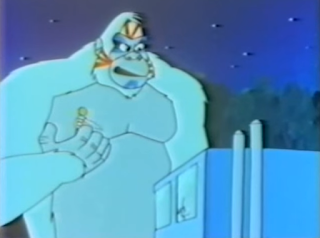 The ruse is successful, and the miners are driven off.   The episode' s highlight is a scene in which Kong battles a bull-dozer or crane, and makes short work of it. Since this is a kid's show, however, he only crushes the vehicle after the driver has vacated.  It's also intriguing that Kong, in disguise, actually resembles the character's son, as seen in the 1933 sequel to the original film.

The episode ends with the miners realizing (thanks to Captain Englehorn) that the island possesses "natural obstacles beyond our control."  In other words, Bobby has saved the beautiful island both for Kong, and future generations. 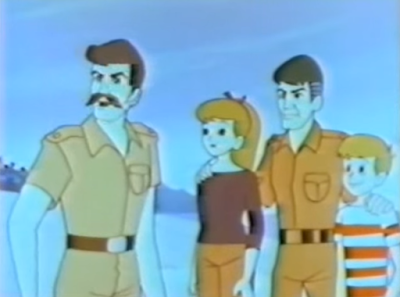 One can see how this six minute story is simple, and aimed at children. The message, about conservation, is plain, and Bobby is the protagonist, the one who -- independent of his father's wishes and plans -- saves the day.

The second six minute story I'll look at for this special Saturday Morning Cult-TV Blogging is "Dr. Who." This is the tale that introduces the mad scientist villain to the series.  He is visualized as a very short, bald man in a lab coat. He also wears thick, black glasses, and thick black gloves. 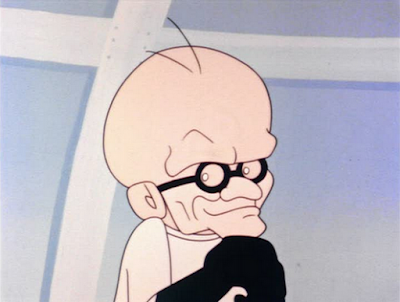 As the story begins, Professor Bond introduces Dr. Who to Bobby. Dr. Who wants to take Kong away from the island, on a two day trip. Bobby refuses to give permission.  Dr. Who then holds the family at gun-point, and launches an attack on Kong.

Helicopters assault Kong, but fortunately Captain Englehorn arrives to help, and Kong breaks out of his prison aboard a ship.  The episode ends with the foreboding (and accurate) observation that "we haven't seen the last of Dr. Who." 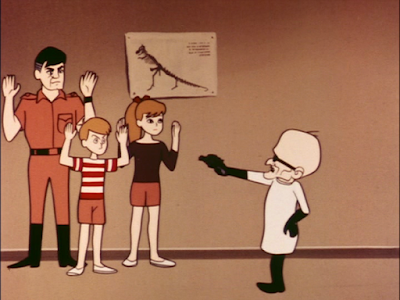 This episode does a good job of establishing the friendship and symbiosis between Kong and Bobby. One would assume that Kong is the great protector in the relationship because he is strong and, well, gigantic.  But here we see that Kong must also be protected too, and that Bobby steps into that breach. He is Kong's guardian as much as Kong is his.

Both of these episodes from the 1966 animated series are short and sweet, and filled with adventure. Kong himself is portrayed as a gentle giant, which is appropriate, given the intended audience.
at August 01, 2020