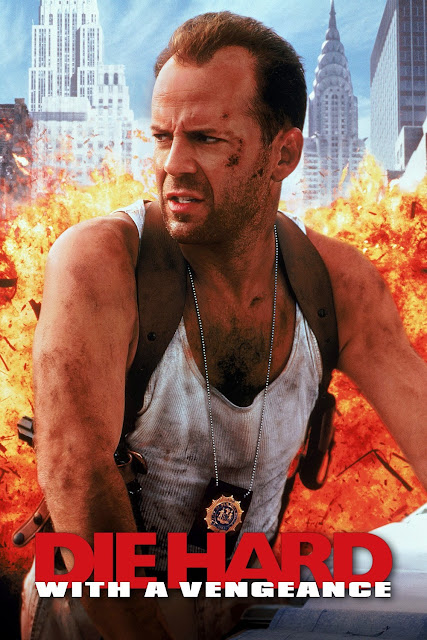 The highest grossing American film of 1995, Die Hard with a Vengeance -- directed by John McTiernan -- thrives so fully as a work of art and a splendid entertainment because it lets go of many of the series’ past-their-prime characters, settings, and ideas.

Die Hard with a Vengeance is set during a hot, sweaty summer -- when temperatures rise -- instead of during a bitter cold Christmas, for example.

Similarly, this third Die Hard film doesn’t play the “fish out of water” card a third time, and the writers permit John McClane (Bruce Willis) to actually work in the city he actually calls home: New York. It’s nice to see him on his own turf for a change.

And even more rewardingly, this second sequel doesn’t shoehorn in cameos from supporting characters who are no longer crucial to the narrative.

Beloved but ancillary personalities such as Al Powell, Dick Thornburg and even Holly Gennero McClane are all absent from the action this time around, and that’s as it should be. Accordingly, they no longer divert time and energy away from the storytelling.

That probably sounds terribly harsh, but the fact of the matter is that action movies shouldn’t be forced to cater to the demands of fan service.They should focus, instead, on thrills, suspense and movement.

This Die Hard even eschews the franchise’s trademark obsession with a threat in a single, isolated location (a snowed-in airport, or burning building), for a sprawling city-wide chase instead.

Accordingly, a man “alone” story (and franchise) becomes a buddy story instead; one with razor-sharp repartee and a high degree of consciousness about the black/wide divide in New York City at the time.

Where Die Hard 2: Die Harder (1990) enthusiastically regurgitated the ending from the first film, and took pains to repeat familiar scenes and character tropes, Die Hard with a Vengeance feels edgy and fresh by contrast. The franchise feels rejuvenated.

All these changes are a recipe for a return to form, and Die Hard with a Vengeance proves itself the second best film in the five-strong saga, behind only the original Die Hard. 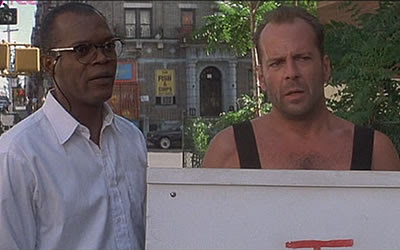 During a hot summer, a mad terrorist who calls himself Simon detonates a bomb in busy Manhattan. As the city attempts to respond to this act of terrorism, Simon demands that NY police officer John McClane -- now “two steps shy of being a full-blown alcoholic” -- play a game with him.

John, still mourning the end of his marriage, has no choice but to agree, and his first task involves wearing a sandwich-board with racial profanity printed on it in Harlem.

Simon leads John and Zeus on a merry chase through the city, playing “Simon Says” with them regarding an incoming train, and a bomb in a park and other challenges.

And while revenge appears to be his game, this Gruber shares his brother’s uncanny ability to misdirect authorities.

“This guy wants to pound you until you crumble.”

Die Hard with a Vengeance commences with a blast. The sequel opens with a crisply-cut montage of ordinary life in Manhattan, edited to the Lovin Spoonful’s 1966 hit, “Summer in the City.”

Then a bomb detonates on a busy street, flipping over cars in the process, and the idea of tempers flaring on this hot summer day is beautifully expressed.

This is a day which will see an explosion of violence and hot temperatures. Not only is this a summer-time setting a determined shift away from the wintry, Christmastime Die Hard and Die Harder, but the setting enhances the idea of temperatures rising among two very different men: John and Zeus.  They are like oil and water, and do not work together easily or well.

And that idea, of course, ties in with the “binary liquid” bombs Simon utilizes. These explosives only detonate when two unlike fluids flood together into one vessel. On their own, they are not combustible, but in combination…watch out! 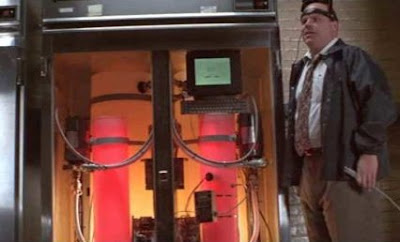 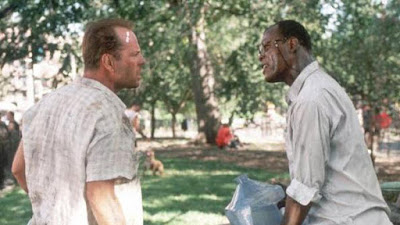 As one character notes “once the two liquids are mixed…be somewhere else.”

This is an observation abundantly true of John and Zeus as well. They bicker, quip, and challenge each other throughout the movie, with tempers soaring and accusations of racism flaring. But they also manage to solve problems, work together, and save the day.

When they combine, things do get hot, though. Indeed, everywhere John and Zeus go, they behind leave a trail of destruction and explosions. They are very much two unlike ingredients combining to explosive effect.

I appreciate that the movie makes race an issue, and doesn’t soft pedal its importance in the dialogue. So much of Die Hard 2: Die Harder felt rote, a by-the-numbers repetition of the ingredients that made Die Hard so great.

Yet there seems an ambitious attempt here to move back into a realm approximating our reality. John and Holly have broken up, and their rift isn’t easily repaired. John is an alcoholic, and has lost his sense of purpose. The reality of racism -- and racial mistrust -- fits into this leitmotif as well, and neither main character is ever treated as the bad guy. Instead, they circle each other warily, wondering if the other is a racist, or just very, very opinionated. Both men are heroes.

The late great Michael Kamen (1948-2003) contributes another pulse-pounding score for a Die Hard film here, and in this case, he weaves the popular Civil War song “When Johnny Comes Marching Home” (1863) into the proceedings many, many times. It works beautifully in the context I’ve described.

It’s an exaggeration to say that John and Zeus are fighting a civil war with one another, perhaps, but the movie does feature the idea that Simon is provoking a war of sorts in New York while he waltzes into the Federal Reserve Building to rob its gold.  Gruber knowingly makes temperatures rise on a hot day, so no one will detect his true agenda. He sets the City against itself. He sets blacks against whites. He even sets parents against police (setting a bomb in a school), and he mixes those “binary liquid bombs” of McClane and Carter.  That sounds very much like the definition of a civil war.

Irons also gives audiences the third Die Hard villain in a row to fake an American accent or dialect, and the idea has totally lost its impact by now, even if, overall Irons makes for a fiendishly effective villain.  I must admit, I enjoy the film’s call-back to Hans Gruber (Alan Rickman), and love the idea of that mastermind boasting an equally diabolical brother. Simon/Peter has some interesting tics, or at least appears to, but like his brother, he is really all about the money.

Die Hard with a Vengeance also succeeds because the action alternates from frenetic kineticism to buttoned-down suspense so assuredly.

Sure, we get some amazingly choreographed moments like John’s impromptu taxi drive through Central Park, but then -- moments later -- we get this contained, intimate suspense scene involving the defusing of a bomb, or the playing of a Simon Says game. 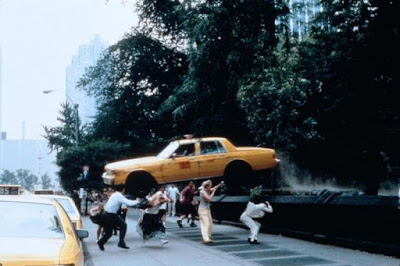 The film is actually like a game of Simon Says in terms of its structure. It stops then starts, then stops again, until given license to cut loose. Every Die Hard movie needn’t work in this way,  of course but this new paradigm makes the film feel fresh and unpredictable.

Die Hard with a Vengeance possesses so much energy and verve, so much heat, if you will, that one might conclude it is only “two steps shy of being a full-blown” masterpiece.

After the box office disappointment and mixed critical notices of  Mars Attacks!  (1996), director Tim Burton returned to theaters in 1999 w... 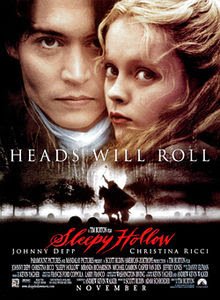