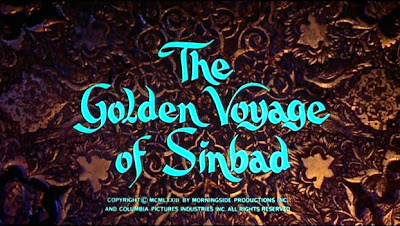 Released in 1974, The Golden Voyage of Sinbad is my Sinbad movie.  I saw it theatrically as a five-year old, and was absolutely mesmerized by the sword-fights, the Ray Harryhausen monster action (filmed in stop-motion called "Dynarama") and the fantasy setting, on the lost island of Lemuria.

Even though I  boast a strong childhood connection to this film, however, I still maintain that it is actually superior, quality-wise, to both its predecessor, 1958's 7th Voyage of Sinbad and its successor, 1977's Sinbad and the Eye of the Tiger. 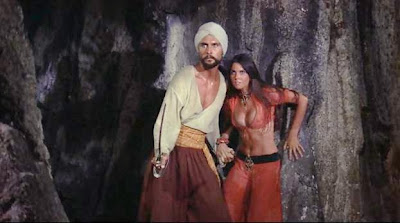 This is so largely because the screenplay is far more consistent regarding its villain, Koura (Tom Baker) and his powers, and even is largely consistent in terms of the monsters Sinbad encounters: they are manifestations of the sorcerer's power, not just random beasts walking around.

In the film, Koura establishes that to "summon the demons of darkness there is a price...it consumes part of me," and that line is a key to much of the film's action and narrative.  Koura seeks an ancient Lemurian amulet (shattered into three pieces) because by using his dark forces, he has aged himself...his life-force ebbs.  The tablet will lead him to a fountain of youth where he can rejuvenate himself.

In terms of the monsters, save for a centaur and a griffin, Sinbad battles monsters that Koura puts up to block the sailor's path; to stop him from finding the fountain first.  These monsters include a tiny, flying harpie (shades of Jason of the Argonauts), a ship's mast/statue come to life, and a multi-armed statue of Kali.  The lengthy, incredibly-rendered sword-fight with Kali is the undisputed highlight of the film, a terrific set-piece that still captures the imagination. 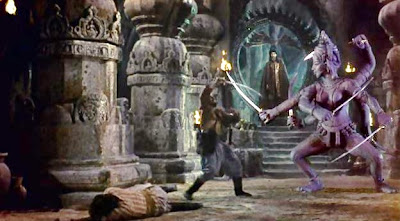 But the point is that Koura's magic is used to a specific end, and consistently so, throughout the film.  If you look back at Sakurah in 7th Voyage of Sinbad (played brilliantly by the great Torin Thatcher), he merely wanted a genie lamp and would stop at nothing to get it, and then happened to keep a dragon as a pet in his subterranean headquarters on the island of the Cyclops.

These ideas didn't stick together as well as those you find here, and we did not understand the nature of Sakurah's evil; his motivation for it.  His power also seemed to have no downside or cost.  Worse, Sinbad seemed to interact with Sakurah as if he trusted him for much of the film, when it it was obvious to everyone with eyes that he was evil...or at least scheming  There was some screenplay...muddle there.

In The Golden Voyage, Koura's quest is plain, and he even becomes a somewhat sympathetic character because we know and understand what he is after, and what is at stake for him if he fails.  He's a great villain, and Tom Baker is terrific in the role.  After watching Dr. Who for all these years, I had forgotten how masterfully he could turn his charismatic screen presence sinister.

Unlike its predecessor, The Golden Voyage of Sinbad also reveals some of the flavor of Sinbad's ancient world -- like the fact that he is a Muslim -- by allowing him to utter comments about and proverbs from Allah.  This may sound like a small or inconsequential thing, but 7th Voyage of Sinbad essentially made Sinbad an American cowboy in classical Baghdad, one heading-up what became a 1950s American nuclear family.  He had no colors, no shades, no sense of being from somewhere other than America.

The Golden Voyage of Sinbad isn't about Islam in any meaningful way, but it acknowledges at least, the truth that Sinbad originates from a different cultural tradition than many of those in the audience.  Today, with all the rampant Islamophobia, I doubt even the harmless mentions of Allah and religion in Golden Voyage of Sinbad would be permitted in a mainstream film, which is a sad development.    The history of the world, and the history of mythology, shouldn't be a football for contemporary ideological differences...but they are.  Sinbad comes to us from a defined time, place and tradition in the world, and to ignore his place of origin is like ignoring the fact that Clark Kent was raised in Smallville, or that James Bond is English. 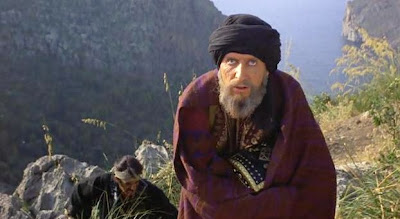 I also appreciate The Golden Voyage of Sinbad more than the other Sinbad films for two further, specific reasons.  First, it actually differentiates between the crew men on Sinbad's vessel, offering us some comic relief in the form of one man.   This is important. In the other two Sinbad films, the crew men have no personalities, no differentiation, and no memorable identities.

And secondly The Golden Voyage allows Sinbad -- this time John Phillip Law -- to be a little less wholesome and pure.  Here, he brings Caroline Munro's slave girl, Margiana, along to Lemuria, and it's not because she plays a good game of chess, if you know what I mean.  There's some (harmless) sexual innuendo, obviously, and as an adult, that's far more interesting to watch than the innocent, "pure" love of Sinbad and his betrothed (nowhere in sight here, by the way....) in 7th Voyage.

What I'm getting at in this review, without offending anyone, I hope, is that The Golden Voyage of Sinbad -- perhaps owing to its post-James Bond milieu -- is a bit less simplistic in narrative, in style, and in detail than its esteemed and rightly-appreciated predecessor.

The message here is that evil -- though powerful in allure -- carries a "weight" or "cost," and that's a terrific message to impart to children learning the differences between right and wrong.   The sub-plot involving a prince in a mask, Vizier (Douglas Wilmer), also conveys a nice little lesson.  Though ugly on the outside (because of burns inflicted by Koura), Vizier is beautiful on the inside...and that beauty eventually comes to the surface.

And by the way, I noted with interest that the moment here wherein Vizier removes his golden mask and stuns the hostile natives of Lemuria was repeated hook, line and sinker in the Buck Rogers in the 25th Century episode "Journey to Oasis," with Mark Lenard.