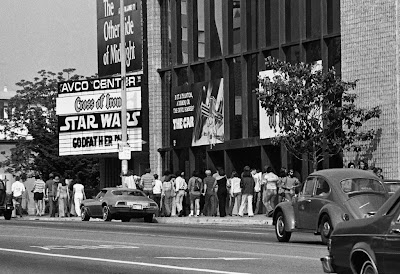 Before the age of social distancing, standing-in-line to see a movie was a communal experience first, one allowing fans to connect to other Star Wars fans and to plug-in to the community’s sense of enthusiasm and excitement

And secondly, standing-in-line qualifies as a nostalgic experience for older fans, at least for ones of my (advanced) age. Mass distribution for theatrical releases, and insta-streaming precludes the necessity.

Because let me tell you, back in the day, if you wanted to see Star Wars (1977) or The Empire Strikes Back (1980) or E.T. (1982), for that matter, standing in long lines was absolutely an unavoidable part of the experience.

I will always remember the summer of 1977 and the coming of Star Wars.  I was in second grade at the time, and a friend who lived up the block from me in Glen Ridge came to school with a Star Wars movie booklet; one that featured imagery of Dewbacks, Banthas, Tusken Raiders, Jawas, C3PO, Chewbacca, Darth Vader and other characters of seemingly impossible and unbelievable imagination.

I had never seen so many strange creatures assembled between two covers, and I so listened in awe as Stephen, my friend, described the film to me in some detail.  I still didn't quite understand why robots were co-existing with monsters and other creatures. It seemed...weird.

At this point, I should add, I was still high on King Kong (1976), and could not quite believe that any movie might possibly surpass that particular viewing experience.  So sue me.  I was seven.

Soon after my introduction via Stephen to Star Wars, my parents took me and my sister to see the film at a movie theater in Paramus N.J., and I couldn’t wait to see what I would make of the movie. 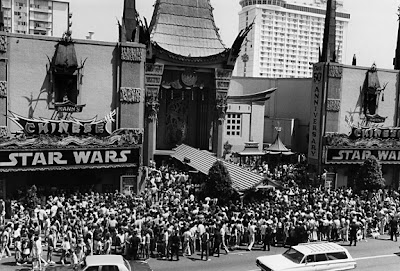 For close to three hours.

The line at the theater stretched around the large rectangular building -- around three corners -- and then led out into the huge parking lot. And the line moved at a snail’s pace.

Finally, of course, we got into the auditorium, and it was absolutely packed. Everyone in my family had to squeeze past other patrons to find four seats together.

And then the movie started and my life changed.  That night before I went to bed, my mother asked me if I liked the movie. My mind was still reeling, and I said that I did.  But I suppose I was a little reserved.

She then absolved me of my guilt: “It’s okay, John if you liked it better than King Kong,” she said, apparently sensing my loyalty and allegiance to the big ape.  My façade cracked quickly at that point and I was glad and relieved to admit the truth.

I had liked Star Wars a whole lot better than King Kong.  It was…amazing, like nothing I had ever imagined.

By the time The Empire Strikes Back arrived in theaters in 1980, I knew to expect a long line.  And so did my parents.  Before queuing up for the sequel, they bought me Marvel Star Wars and Shogun Warrior comic books to read for the wait.  I also had my Star Wars novelization in hand, and a few action figures in my pockets.  The time in line still seemed eternal, but again, the wait was worth it.  I left the theater wondering how on Earth I was supposed to wait for three years to discover Han Solo’s fate.

Then, by the time of Return of the Jedi, there was no need to stand in line, at least in Montclair, N.J., where I saw the film at the Clairidge Theater.  I came out of the film deflated, thinking “that’s it?”  And now I must wonder if part of my disappointment came about at least a little bit because I missed waiting in line.  There was no build-up to the experience, and no plugging-in to the enthusiasm of other Star Wars fans and even general audiences. More likely, the movie was just disappointing, and the experience played almost no role.  Right?

Of course, I’m glad that, by and large, we don’t have to wait in line to see movies anymore…unless we choose to.

But I do wonder what the lengthy standing-in-line experience meant in terms of a movie meeting or not meeting audience expectations.  By waiting for hours in line for a film, were we just relieved to be inside -- in the air conditioning -- and therefore more receptive to a film’s spell?

Or did the waiting-in-line actually build up our anticipation to such a degree that nothing could meet those expectations?  I wonder.

I do know this for certain: Star Wars, The Empire Strikes Back, Raiders of the Lost Ark and E.T. certainly surpassed my wildest expectations, and those are the films I remember most vividly standing in line for.