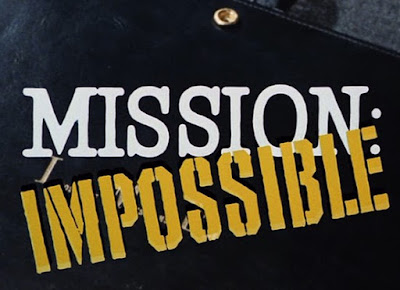 "Encore" is one of the most audacious installments of the entire seven season run of Mission:Impossible (1966-1973). At times, the premise of this sixth season episode beggars beliefs, but at other times, the execution is so convincing that the audience buys the whole thing.

In "Encore," William Shatner guest stars as a gangster named Kroll who, nearly forty years earlier, committed the murder of a rival mobster, Danny Ryan. Kroll hid the body, and weapon used to kill him, but nobody knows where.  Accordingly, to this day, no one has been able to pin the murder on the powerful Kroll, or his partner, Stevens.  Worse, to maintain their "innocence," Kroll and Stevens have been murdering all the witnesses to the crimes, arranging accidents for them. Their latest victim is a little old lady in a hospital.  Kroll and Stevens blow up her room in the hospital to keep her from talking. 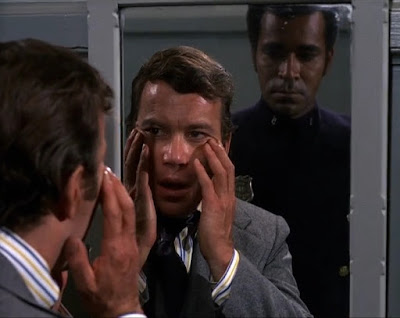 Jim Phelps (Peter Graves) hatches a plan to turn back the clock. Using a potent combination of make-up, medicine, and a studio lot, the IMF endeavors to make Kroll believe it is 1937 again, and have Kroll relive the crime -- the murder of Ryan -- that they wish to solve, and nab him for.  They hope, in the exact recreation on the lot of his home in Long Island, Kroll will make sure history happens twice, and show them where he intends to hide Ryan's body, and the gun,

In previous (and later) episodes of this stellar series, the IMF has tricked "marks" into believing they have been in comas, encountered ghosts, been cured of diseases, stranded on a desert island and other wild outcomes, in order to glean important information from them. In "Encore," however, the IMF must perfectly recreate an era half-a-century gone. If one detail is wrong, the plan fails.  If one example of modernity is seen, the mission fails. If Kroll makes it off the studio lot, the plan fails.

More than any of that, even, the team must convince an old man that he is young again, both in appearance and stamina. It's a tall order. They are asking not only his mind to sabotage his sense of reality, but his body to do the same.

Doug (Sam Elliott), in his final appearance on the seires uses medicine to temporarily stop the pain in Kroll's aged, bum knee, and provides him a latex mask of youth that will last, precisely, six hours.

All the details must be perfect in the studio lot version of 1937, and at one point Jim Phelps sees an "extra" wearing 1970's style sun-glasses and rips them off his face abruptly.

Adding tension to "Encore," Kroll's partner, Stevens, is aware that he has been kidnapped, and on the look-out for him. So the IMF team must get Kroll to reveal the location of the body, and they have two deadlines. First is the six hour make-up duration. The second is the circling Stevens, getting ever closer to the movie lot. 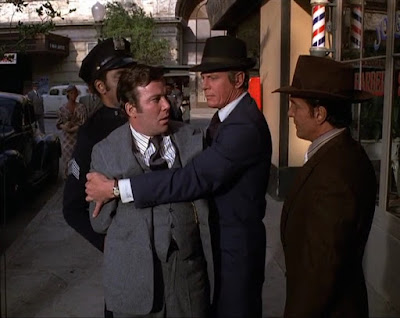 A few things make this audacious episode work, and, finally, feel believable. The first is William Shatner's brilliant performance as Kroll. He doesn't let the gangster fall for the trick at first.  That would make him seem gullible, and an easy mark. Instead, as the IMF team walks the mobster through a series of "clues" that make 1937 seem real, Kroll relents, but a little at a time.  A great moment occurs mid-way through the story when Kroll hears a plane flying by overhead, from his apartment.  He looks up from his window, and sees a plane above.  Amazingly, it is a plane appropriate to the 1930's era.  In other words, it is not a flaw in the plane, it is part of the plan! Phelps has thought of everything, including stopping flyovers of modern planes, and providing for the flyover by the older plane.  This meticulous detail, one can see on Shatner's face, is the thing that sells the idea of Kroll time traveling back to 1937.  Who would possibly go the trouble of having an era-accurate plane fly overhead, apparently at random?

Only Jim Phelps, who apparently has a huge budget to run his intelligence ops, given what he pulls off in "Encore."  Think about it. There's the plane flyover. There are dozens of extras. There are 1930's era cars. There's the complete make-over of two city blocks on the studio lot. There are the perfectly timed tape recordings of 1937 baseball games for the radio, and more.

Kroll begins to realize what happens, and starts running, to escape the lot. As he runs, the medicine Doug gave him wears off, and he starts to limp, hobbled again by old age.  Then, the make-up on his face begins to melt, and he is fully restored to old age, and to the present  At just that moment, Kroll's partner, Stevens, finds him, and both men realize, without saying a word, the "impossibility" of the trap that has snared them.  It's one of the most colorful and satisfying conclusions in the sixth season of Mission:Impossible. 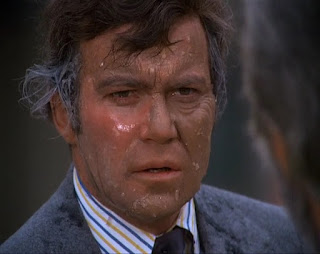 "Encore" is a controversial episode of this series, because for some, it is really about mission or format creep near the end of the series' long run.  They see the episode as an example of the series running out of good ideas.  Most stories in the canon, after all, are grounded far more clearly in reality. The plots are usually based on playing the mark's assumptions against him  or herself, and therefore psychological in nature.

By contrast, the plan in "Encore" is big, bold, brassy and wild.  But the 1930's details, and the great (and largely forgotten) Shatner performance make this "mission" an unforgettable hour.  I would argue this episode isn't representative of mission creep, rather some kind of go-for-broke example of creative inspiration.