The "most popular group in the galaxy," Andromeda, also seems to be the source of youth riots on Earth and elsewhere in civilized space. Every time the group's concerts are broadcast, there is a 55% surge in youth crimes.

At the Directorate's request, Buck travels to a satellite called "Music World" to meet with the band, personally. He learns that the group is managed by Lars Mangros (Jerry Orbach), and that Mangros plans to use his "particle ionizer" during the galaxy-wide concert coming up.  Everyone "under 30" in the galaxy will riot due to the influence of this device, and authority will collapse. Mangros believes he will be able to step in, and control the programmed youth of the 25th century.

Acting as an emcee for Andromeda, Buck investigates on Music World ("a conglomerate of music producers,") and attempts to stop Mangros before the galaxy-wide concert can sow cosmic unrest. 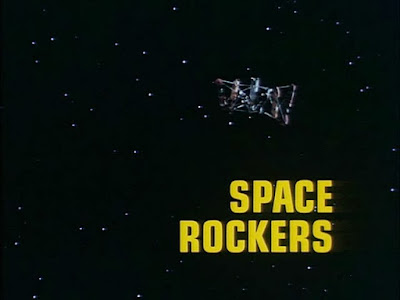 One would be hard-pressed to find a dumber, or more insulting episode from Buck Rogers in the 25th Century's first season than this one. "Space Rockers" is a dreadfully stupid installment of the series, and one that has not aged well, either.

In the first instance, the episode is written from the perspective an old person. And that is, basically, that new music is scary, and responsible for society's problems. Such music corrupts the young, and makes them act violently, "Space Rockers" tells us. Give 'em rock music and these kids may steal a car...or a starfighter! 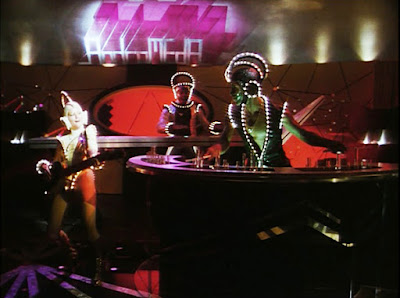 I suppose one could argue the story is actually about how greedy adults manipulate music to make money and control our youth.  That's a deeper and more interesting idea, I readily admit,

Either way, however, young people are dopes.  Depending on how you choose to read the narrative, the young people are either victims of their musical tastes, or easily manipulated based on their musical taste.  Here, the forces of authority and establishment (represented by the Directorate and Buck) set things right for the helpless youth, who will destroy the galaxy without appropriate (adult) supervision. The youth culture is basically seen as a mob, controlled by something other than reason (whether hormones or a particle ionizer).

The whole concept of "Space Rockers" doesn't really jibe with the Buck Rogers format. Buck is supposed to be the voice and face of freedom and liberty, freeing the stodgy 25th century from its reliance on computers. Here, he is part of the authority, protecting the status quo. What the episode doesn't get at is any sense of a larger culture. Why is the music of Andromeda appealing to the youth of the galaxy in the first place? 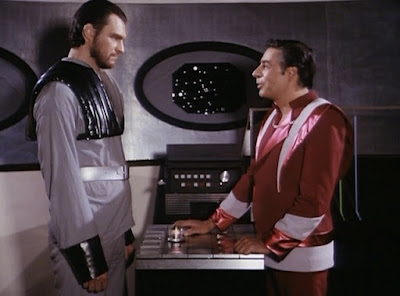 Also, the episode features a 25th century rave with light tubes and dancing, which is a weird retro vision of the future, but again, one must ask: why are all the teens relegated to a "youth center?"  What is this youth center?  It has the weirdly oppressive look and sound of an indoctrination center. And again, the kids are supervised by Directorate officials while they enjoy their time there?  This is an aspect of the 25th century that probably bears closer examination.  If kids are all forced to congregate and enjoy their free time in this slightly creepy "youth center," it's possible that Lars Mangros is on to something.

Not really, but I hope my point is clear.

Even continuity-wise, one has to question the episode's narrative. In the movie/pilot, Buck introduced rock (okay, disco...) to the stodgy folk of the 25th century, and it was quite the scene. Here, the galaxy -- months later, only -- has moved on to worship of Andromeda (a phenomenon Buck compares to the Beatles). This is a real cultural awakening that, again, is not examined in any kind of detail.  Why has this kind of music taken off now?  Did Buck's arrival and introduction of disco have anything to do with it, with the anarchic messages of rock music spreading across the galaxy like a wildfire? 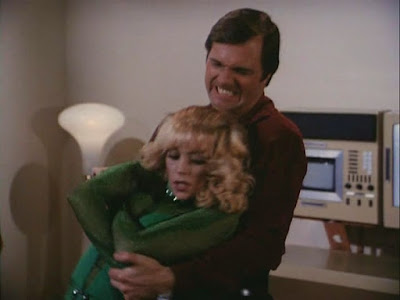 And Music World? A satellite where music producers live and work?  Okay, that's just weird too. I don't know if  this is supposed to the equivalent of a commune, or something like it; but it doesn't make a lot of sense that an entire satellite would be devoted to housing music producers.  Again, six months earlier, or thereabouts, Earth music was still stodgy, old-fashioned waltzes. Did these producers just move in to Music World after Buck's arrival? Are there enough music producers on Earth, in the 25th century, to populate a satellite of this size?

I remember watching this episode for the first time in 1980, when I was 11 years old, and cringing in embarrassment. Even at that age, I knew Buck should be exploring the ruins of Anarchia, or learning more about the 25th century, or seeking to discover more about what became of his own family during the Holocaust.