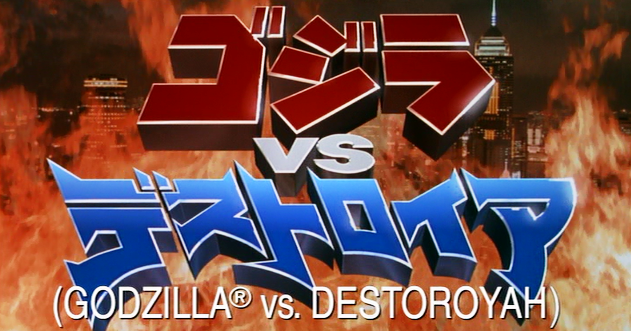 To the uninitiated -- or perhaps the un-converted -- my next sentence may read as silly. But I’m writing it anyway.

Godzilla vs. Destoroyah (1995) is an emotional and heart-breaking film.

The movie -- the last of the Godzilla Heisei run -- charts, in very stirring terms the final battle of the great green monster.

But even as this battle occurs, Godzilla also grapples with his mortality in the form of his own bum ticker.

His heart, much like a nuclear reactor is constantly threatening to melt-down.

His hours are numbered, and his body is coming apart, but before he dies, Godzilla gives it all up for his son, for his family.

If one goes back to Raymond Burr’s canny description of Godzilla as a “strangely” innocent and tragic creature, these circumstances take on a very human weight.  We all grapple with our mortality, and there is very little we wouldn’t do for our children.

Thus, Godzilla vs. Destoroyah suggests that Godzilla and humanity have much in common.

The final scene of the film, after Godzilla’s rage over the death of his son, sees the monster transferring his own mortal energy to his son’s broken body in a (successful) attempt resurrect his boy.

And then, without pretense, Godzilla melts down.

Honestly, I haven’t had a lump in my throat this big since Spock died in Star Trek II: The Wrath of Khan (1982).

My boy, Joel -- aware of what happens at this film’s conclusion -- refuses to watch it with me. Someday we’ll watch it together, I’m certain, but for now I just told him that the film was, to my delight, a really, great one in the canon. 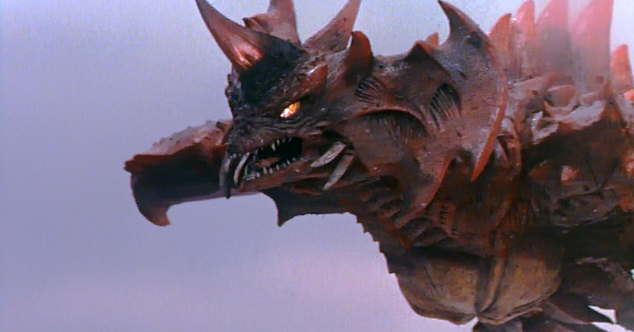 “I can’t believe it! Now we have two monsters!”
Miki Saegusa (Megumi Odaka), who gained insight into the minds of Godzilla and his son during the Space Godzilla incident, returns to the monsters’ island to check on the family, but finds it missing…destroyed.  Meanwhile, Godzilla comes ashore in Hong Kong in a strange condition, his body pocked with strange discolorations.  He doesn’t seem himself, and causes massive destruction to the city.

The grandson of Dr. Yamane, Kenichi (Yasufumi Hayashi ), is hired by the JSDF (Japanese Self Defense Force), and reports that Godzilla’s heart -- in essence a nuclear reactor -- is rapidly melting down.

When the monster reaches a certain temperature threshold, his destruction will cause a shock wave that will rip apart the atmosphere of Earth, and destroy all life on the planet.  Kenichi does believe, however, it is possible to freeze Godzilla and thus forestall the meltdown.  To this end, the new Super X, mark III, is deployed.

Meanwhile, Miki searches for Little Godzilla and finds that the same force that destroyed the island and super-infused Godzilla’s heart has transformed the kindly kaiju into a young adult who more closely resembles his father.

Elsewhere in Japan, a terrifying side-effect of the Oxygen Destroyer’s use in 1954 is discovered. Strange, mutated Precambrian crabs unite to create a giant malevolent beast, dubbed “Destoroyah.”

Because Destoroyah is born of the Oxygen Destroyer, Japanese authorities believe it can be used to destroy the rampaging Godzilla, and neutralize the threat of global annihilation.

In order to make Godzilla and Destoroyah fight, however, Little Godzilla must be utilized as a decoy, a tactic that Miki deeply disapproves of, but must take part in, nonetheless… 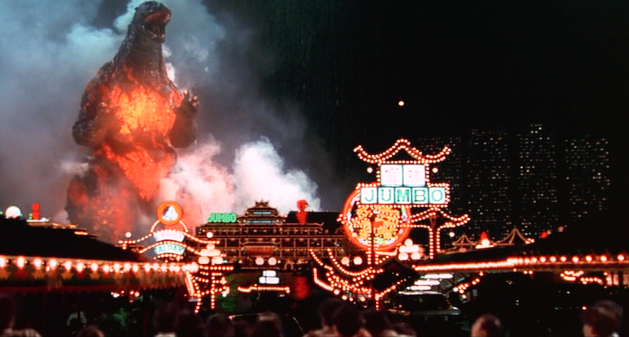 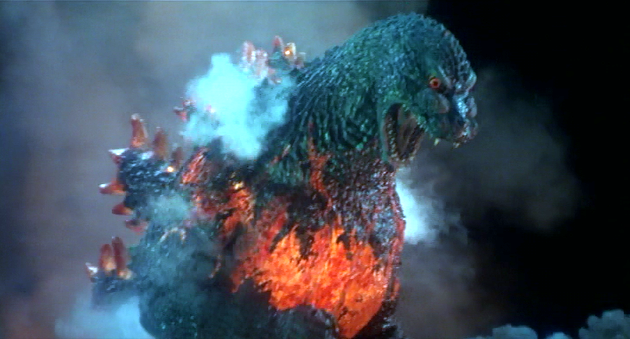 .
“I have a feeling this is going to be Godzilla’s last fight.”

In significant part, Godzilla vs. Destoroyah succeeds so ably because it is in equal parts uncompromising and sentimental.

And no, that isn’t a paradox.

On one hand, the movie plays as a relentless ticking-clock or countdown movie.

As time elapses for Godzilla, we are left with one foregone conclusion: he is going to die. When Godzilla first appears in the film, he is sick, “boiling over” from his nuclear reactor heart, and it’s just a matter of time before he expires.

The movie doesn’t play any games with that reality, or devise any last-minute Hollywood bullshit that saves his life.

Instead Godzilla gets -- as I hope we all deserve -- a good death, and one in service of his beloved child, Little Godzilla.

Yet the movie also proves remarkably sentimental in the sense that we are asked to feel sympathy for Godzilla.

He sees Destoroyah scoop up his child, carry him away, and drop the young one from a great height, breaking his back and killing him in the process. Godzilla roars with anger, and a human bystander seems to translate his emotional state.

She says that Godzilla doesn’t understand why he has “lost his family.”

Death -- more than Biollante, Gigan, or Hedorah -- is the one force in the universe that none of us, not even Godzilla, can conquer, or undo. Seeing Godzilla cope with this tremendous loss, and choose his own death over his son’s death, reminds us of all that is good about humanity. 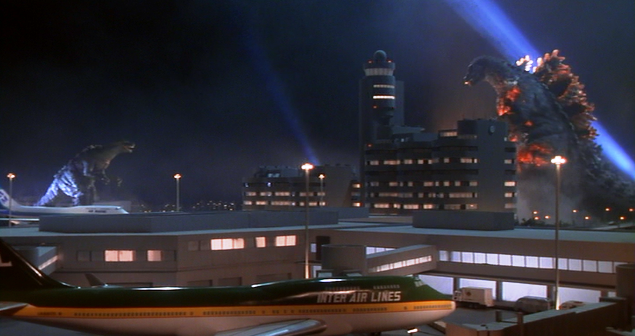 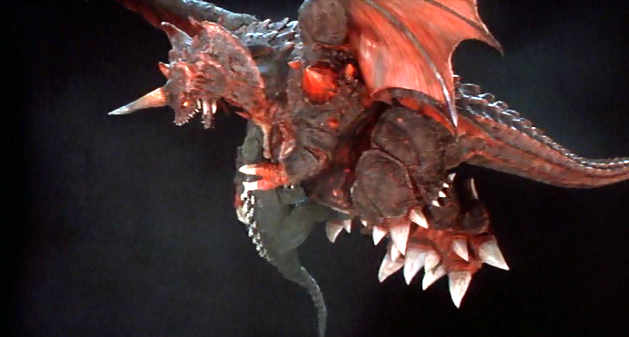 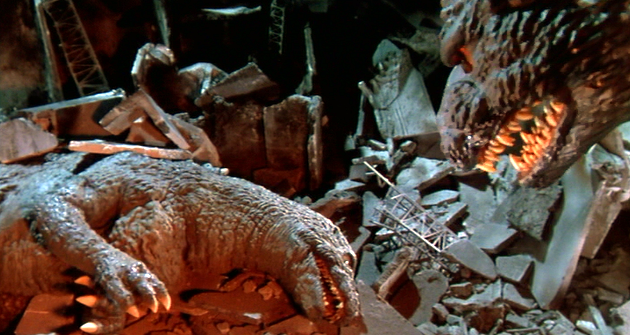 The film also boasts a brilliant final shot that validates Godzilla’s selection.  Little Godzilla -- now fully grown and the spitting image of his Dad -- rises from the radioactive mists of Tokyo, and as the camera moves in, ever closer, we see that iconic, spiked silhouette more clearly, and hear that trademark roar bellow.

The torch has been passed. 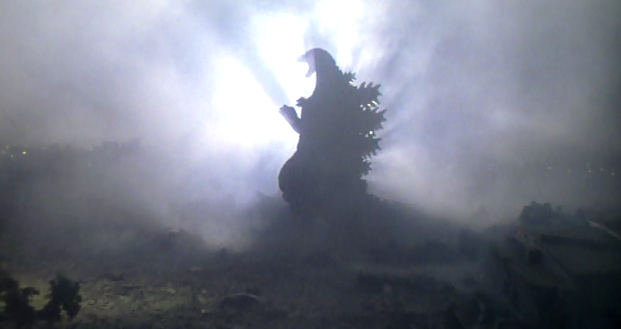 Godzilla vs. Destoroyah also succeeds because Destoroyah is one malevolent son-of-a-bitch.  As I’ve noted elsewhere this week, Godzilla movies work best when the villain is memorable and distinctive. In this case, Godzilla battles a monster that was created, in essence, out of the original Godzilla’s destruction in 1954

But rather unlike Godzilla, Destoroyah is just a horribly evil creature.  He does seem to be Godzilla’s most menacing foe, historically speaking, and remains the one monster, I believe, that Godzilla has not defeated.  Instead, the Japanese Army and the Super X-3 finish the job, while Godzilla, on his last legs, watches.

I also appreciate the film because there is an atmosphere of life coming full circle in Godzilla vs. Destoroyah that implies finality, or perhaps winter coming.

Not only does Tokyo suffer a literal nuclear winter at the film’s climax, but the reign of Godzilla ends.  At the same time, we meet Emiko Yamane (Monoko Kochi [1932 – 1998]) for the first time since Godzilla (1954), as she nears the end of her life, and wishes to pass on wisdom to the next generation about Serizawa and the Oxygen Destroyer. The re-appearance of this actress sort of closes a loop, or book-ends the Godzilla series (as of 1995…), as does the re-appearance of the Oxygen Destroyer and the unexpected reveal of that ultimate weapon’s “progeny.”

Even the film’s dialogue seems obsessed with endings as Godzilla battles his inevitable mortality. We are reminded that “Tokyo would have become a cemetery,” if not for the Oxygen Destroyer, for instance.

Later a character notes, portentously, “I have a feeling that this is going to be Godzilla’s last fight.”

I don’t believe I can write objectively that the battle scenes between monsters are necessarily technically better in Godzilla vs. Destoroyah than in the other films of the franchise.  Yet I can note that they seem more effective and impactful because of the film’s clever set-up: Godzilla’s mortality, and his need to defend his son.

There is some genuine tension here as the Japanese government uses Little Godzilla as a decoy to attract Destoroyah, and the young monster is left to fight the creature on his own.  Meanwhile, Dad approaches as quickly as he can, but ultimately, too late to help.

If you’re a parent, it would certainly be your worst fear to arrive too late to help your child in a crisis, and that’s Godzilla’s burden here.  Failing in a parent’s most sacred task -- protecting your young -- is much worse than facing one’s own death, and reckoning with that truth is Godzilla’s final odyssey in the film.
Godzilla vs. Destoroyah ends the Heisei Era in fine, heart-breaking form, and thus succeeds as one of the very best Godzilla films ever made.
at May 29, 2019