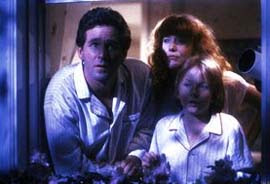 Beginning perhaps in the late 1970's, many horror filmmakers began charting a new domain important to the horror film: the suburban child's bedroom.

Suddenly, a teenage or pre-adolescent child's bedroom carried a whole new resonance. This domain now reflected the director's (and audience's?) love of movie monster/horror movie history, as we can see prominently in the works of Tobe Hooper, Joe Dante or George Romero.  Because these directors love monsters and horror movies so much, they champion them in their films, showcasing how the genre possesses moral (and survival) value. 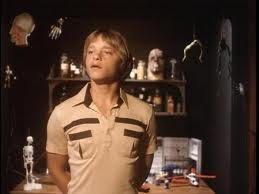 In Hooper's Salem's Lot, a love of magic and monsters is important, because that's the "training" by which you detect the real vampire in your midst.  When  Mark Petrie (Lance Kerwin) is visited in his bedroom by friends transformed into menacing vampires, he knows what they are and that he is in danger.  The reason why he survives, explicitly, is his love of horror, and that love is reflected in the production design of his bedroom.

Similarly, in Friday the 13th: The Final Chapter, Tommy Jarvis (Corey Feldman) utilizes his love of monsters and even his talent making monster masks to put (a temporary) end to the monster Jason.  In this situation, once more, the love of horror is the factor that saves and protects lives.

In Romero's Creepshow, a little boy reads a comic-book (that his father does not approve of), in his bedroom, and he ultimately gets revenge on his Dad for being so cruel.

There's a point to all this. For the movie brat generation, parents did not always understand or approve of a love of the horror genre.  In fact, kids who liked horror were teased and mocked not just by parents, but by classmates too.   So this isn't merely homage to E.C. Comics or Aurora Models. It goes deeper than that.  By featuring these bedrooms in these films -- bedrooms filled with monster posters or models -- the directors are making a point that horror is in fact normal, and possesses value. The unjust or villainous are punished here, and those who "know" horror also realize how to survive because of their "training" in the genre.

The production-design dictating the shape of a child's bedroom is important for another reason too:   The media's understanding and application of advertising techniques.

Specifically, toys from popular movies or television series (such as Star Wars) began appearing in prominent genre films in the 1980's; ones that, like Star Wars, guaranteed big, devoted audiences.  Return of the Jedi (1983) bed covers appeared in The Stuff, and Star Wars figures and spaceships appeared in Poltergeist (along with Milton Bradley's Big Trak). 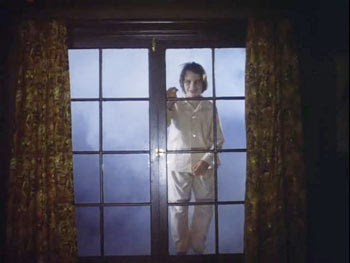 Accordingly, fans of horror films and non-horror films such as E.T. became, like me, life-long collectors of toys, models, trading cards and other movie/tv-related goodies. I must wonder if, in part, this is specifically so because of these films, and the product-placement that appeared in them so frequently.

When I first watched Poltergeist or Gremlins, I knew what I wanted my bedroom (and now my home office...) to look like.  This idea was recently resurrected in J.J. Abrams' Super 8 (2011), which also charted a late 1970's/early 1980's bedroom, replete with models, toys, posters and board games.  These pop culture items are not just period details, they generate nostalgia.  I played with those trading cards!  I had that model kit, and so forth...

More satirically, the notion of product placement run amok was commented upon in Tom Holland's extraordinary horror film Child's Play (1988), which saw a little boy menaced by the very Good Guys toys he loved. Here, your favorite franchise -- down to the sugary Good Guys cereal, I suppose -- could kill ya!

In terms of narrative or thematic utility, the bedroom of a child is a pretty important location in a horror film.  When we go to sleep, we are all vulnerable.  Poltergeist, Child's Play and Gremlins all play on this conceit, whether with clown dolls, evil Good Guy dolls, or monster eggs.

When we sleep, we can't defend ourselves, and so "This Boy's Bedroom" is the very place where children feel most ill at ease.  They are alone.  Their parents are away.  The room is dark.  When the bedroom is invaded, terror  blossoms.   The bedroom is the gateway to dreams -- and nightmares -- so it makes perfect sense that many horror films feature scenes set in this domain.  The bedroom is the last conscious sanctuary we have before monsters can enter our (unconscious) minds and threaten us.  Hoopers' Invaders from Mars (1986) makes a lot of this fact, and the film's horror plays out, specifically, in the (mental) span between bedtime and morning.

Sometimes, the child's bedroom and the fears found there are all about the stories or fairy tales we tell children. In films such as Darkness Falls (2004) and Boogeyman (2005), mythical monsters such as the Tooth Fairy of The Boogeyman manifest in the place that children sleep.

The Child's Bedroom is the place where we face the monster, the place where we surround ourselves with the tools for defeating the monster, the realm that showcases nostalgia for youth and the "monsters" we grew up with, and even, finally, a venue for selling us very expensive toys.  It's hard to make a horror movie featuring kids without at least scene set in this important, and multi-faceted setting.
at February 22, 2019