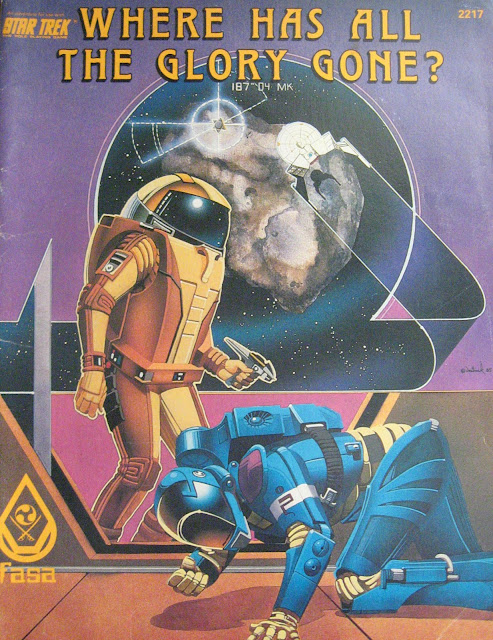 I recently signed up to play Star Trek Online and commenced my training as a Starfleet officer of the 24th Century.  I stopped playing after about an hour (and just as I was about to board a Borg ship too...) because I realized the game was very quickly going to become a black hole of lost time.

Someday, I plan to return... 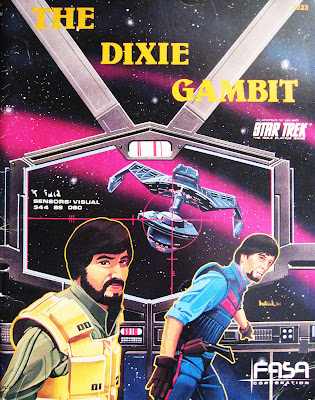 But Star Trek Online reminded me of an earlier experience of imaginative interface with Gene Roddenberry's universe: The Star Trek role-playing game by FASA (1980 - 2001).

I was never really a Dungeons and Dragons kid -- though I played it several times in high school -- because I always leaned more toward hard sci-fi and horror than fantasy.

But a Star Trek role-playing game?  I was so there.

In particular, during my first year at the University of Richmond, my group of friends and I played this role-playing game.  A lot.  We had no car with which to escape from the campus, we weren't allowed to join fraternities until sophomore year, and we were all strapped for cash.   After a few weeks, we'd spent our respective budgets playing Gauntlet (1985) at the student recreational hub, The Pier.  So we had to do something, besides play endless games of Risk.

And remember, when I was in college -- a long time ago, in a galaxy far, far away -- the newest, hottest technology was the Fax machine, so it wasn't like we could all surf the net, text friends, e-mail, watch YouTube or do anything cool like that. 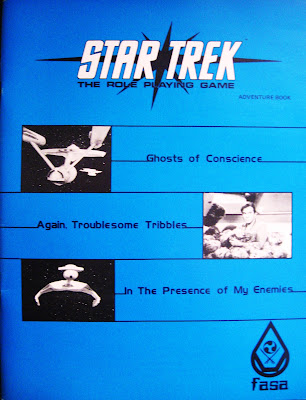 Accordingly, FASA's Star Trek was just what the doctor ordered in my dorm room at Thomas Hall.

My roommate became our heroic ship's captain (of the U.S.S. Nassau), I served as first officer, and other pals  played a Vulcan security officer, a Caitian science officer, and an Andorian communications officer, respectively.  My wife, Kathryn -- then my girlfriend -- even joined us for an adventure or two as a protocol officer keeping an eye on our "cowboy diplomat" captain.

I loved the game (and my role as executive officer) because my roommate wasn't a Trekkie. But he was an ingenious and resourceful fellow, capable of innovative thinking and strategizing.  I was the one with the encyclopedic knowledge of the Trek universe, so between his ingenuity and my contextual skills, we made a potent command team.

I still own a couple of the modules or "episodes" from the Star Trek game that we played back in the day, including "Where Has All the Glory Gone" and "The Dixie Gambit."  In total, there were twenty or so FASA adventures that Trekkers could enjoy, if I recall, with titles such as "Denial of Destiny," "The Vanished," "A Doomsday Like Any Other," "Return to Axanar" and "The Mines of Selka."   Many of the games were sequels to original series episodes.

The thing that I also enjoyed so much about the game, as I remember, was that many of the stories were set not in the days of the Original Series or The Next Generation, but in the movie era.  As I've said before, the movies, in a very real way, represent "my" Star Trek: the productions I grew up with in the late 1970s and early 1980s. 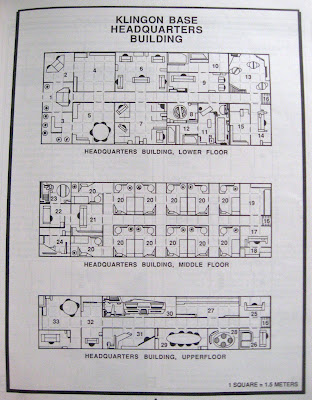 Paramount suddenly revoked the license to FASA's Star Trek game in 1989, just as The Next Generation was really taking off in syndication.  There are reports that this cancellation occurred because of growing discontinuities between the FASA Trek universe, and the canon universe imagined by Gene Roddenberry.

One such continuity apparently involved the depiction of the Klingons and their Empire in FASA.  Still, it seems a shame that the game was canceled just as Star Trek was taking off on television again...

I must admit, I'm pretty divorced from role-playing games today, as a 42 year old, but my understanding is that, like Star Trek Online, they've all moved to the Internet.

There's nothing wrong with that development, but I'll always remember my days at UR with my friends, sitting around in a circle in our dorm room, eating Dominos Pizza, drinking Mountain Dew, staying up too late,and foiling the plans of the Klingons.