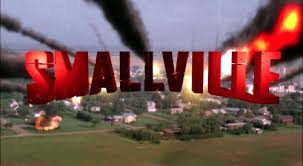 In “Justice,” Clark Kent (Tom Welling) is still busy rounding up Kryptonian criminals who have escaped from the Phantom Zone.  But when his old friend, Bart Allen (Kyle Gallner) -- the fastest man alive -- happens into Kansas, Clark is suspicious that something is up.

Bart is now working in secret with Oliver Queen/Green Arrow (Justin Hartley), Arthur Curry/Aquaman (Alan Ritchson), and Victor Stone/Cyborg (Lee Thompson Young) to help stop Lex Luthor (Michael Rosenbaum), and his secret “33.1” program, which involves the capture and exploitation of those with unusual abilities. His plan seems to to create an army of "super freaks."

On his mission to learn more, Bart walks into a trap at the Luthorcorp Ridge Facility, and Clark attempts to rescue him, unaware that the same facility is refining the meteor rocks that are deadly to him.

Fortunately, Oliver’s “Justice” league comes to the rescue, and destroys the facility. 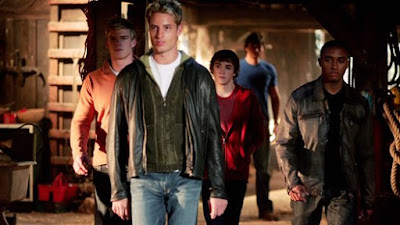 This sixth season episode of Smallville (2001 – 2011) written and directed by Steve DeKnight, sets up the Justice League for future appearances on this long-lived superhero series. Indeed, the league would return with new members (like Black Canary) throughout the remainder of the program’s run.

We live now in an age when superheroes on film and TV are not shy at all about appearing on-screen in comic-book uniforms. Smallville emerges from the age immediately preceding that one (post X-Men 2000]) when this was not the case. There was some embarrassment, apparently, on the part of producers about the comic-book costumes. Accordingly, the Justice League featured here is not seen in uniform, but rather in colorful “hoodies” and designer eye wear. 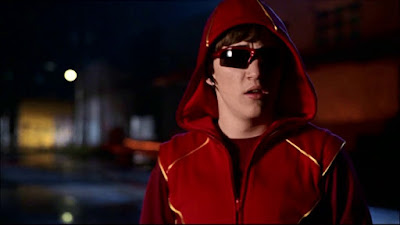 The Flash -- here called Impulse -- wears a red hoodie, for example. Green Arrow wears a green one.  In a nod to the character’s appearance in The Super Friends, Arthur Curry’s Aquaman in Smallville is seen in an orange shirt.

It’s not a perfect solution, for certain, and today – post-Avengers [2012], the hoodies seem silly and unnecessary, when we could have seen the characters in their classic uniforms instead.

So how does “Justice” hold up today?

Well, again, one must consider the historical context. Smallville arose from a TV era that gave us two brilliant genre series: The X-Files (1993-2002), and Buffy the Vampire Slayer (1997 – 2003). In those series, audiences saw monsters-of-the-week, and also a strong post-modern, or “meta” sensibility.

The same is true for Smallville.

Especially notable in this episode is the latter quality.  Oliver jokes that he wants to give his league something with the name “Justice” in it. Similarly, Clark notes he boasts some “pretty amazing friends,” which seems like a reference to the Super Friends version of the Justice League.  The whole episode is quippy and tongue-in-cheek, and yet effective dramatically in one very real sense.

What is that sense?

Well, Smallville ran for a very long time, and had a very “slow burn” approach to its story arcs.  “Justice” is worthwhile because Victor, Arthur, Bart, and Oliver, of course, have all had special episodes devoted to their back-stories and abilities by this point. "Justice" is not their first appearance, but rather their first appearance together. Accordingly, there is a sense of history about each of the league members that we would not have had, if the series had not assiduously devoted time and energy to establishing their characters individually. That history pays off here.

And yes, the episode is a bit cheesy.

I won’t write, as one character quips, that “disappointment abounds,” but clearly this is the Justice League on a live-action TV budget. The team’s most dramatic moment finds the group -- walking in slow-motion-photography -- in the foreground of a shot, as Lex’s facility explodes in the background.  The effects don’t hold up particularly well today, and the moment doesn’t make  any sense anyway. 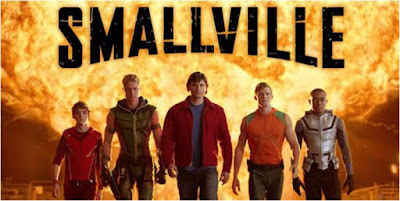 Oliver is still human, rather than meta-human, right? Wouldn’t he want to move quickly away from a fireball?

Actually, the same thing holds true for Clark, since we know meteor rocks are on the premises, and would make for very dangerous shrapnel in an explosion of the size we witness.  But now, instead, we get a cool-for-cool’s sake moment.

The other disappointment, of course, is that Justice League as featured here lacks two of the most famous and notable members: Batman and Wonder Woman. Come to think of it, this Justice League, at this juncture, is all-male.

Still, I was a big fan of Smallville over the years, in part for the investment that Welling and Rosenbaum clearly put into their starring roles.

So when “Justice” aired for the first time -- a decade ago -- I was thrilled to see the Justice League come together in live action.
at November 17, 2017