Saturday Morning Cult-TV Blogging: Valley of the Dinosaurs: "To Fly a Kite" (November 30, 1974)

In “To Fly a Kite,” the Butlers are surprised to see their raft’s first aid kit floating in the black lagoon.  They attempt to retrieve it, only to see a pack of rats run-off with it, rolling it into the wild and out of sight.

Worse, an angry Iguanadon -- Kataras -- is close-by, angrily prowling for food.  When Mr. and Mrs. Butler finally get their hands on the kit, they must retreat to a tree-top to escape the dinosaur.

When Lok is injured and suffers blood poisoning on the far side of a raging river, it becomes imperative to get the kit’s medicine to him. John uses smelling salts to distract Kataras, and then has Greg build a kite to transport the needed supplies over the water… 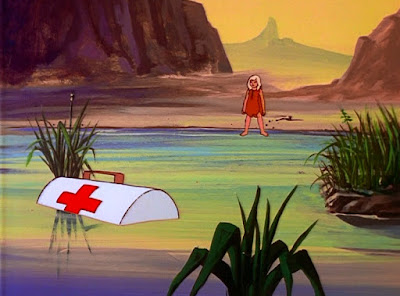 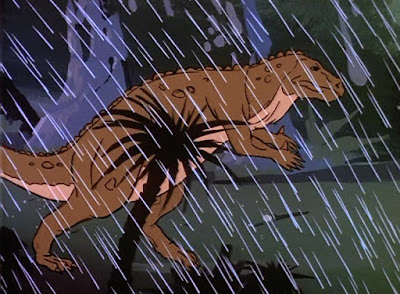 Usually, the Butlers and Gorak are menaced by giant creatures. This week, “prehistoric pack rats” as John calls them, make off with their medical kit.

The Butlers then spend a good portion of the episode following those rats, trying to pick up gear that has fallen out of the kit in the process.  Then they get run up a tree by an angry Iguanadon.

Some days you get the bear.  Some days the bear gets you.

As I write here every week or thereabouts, Valley of the Dinosaurs features two recurring leitmotifs. One involves science helping out, in a pinch.  The other involves the primitive and modern family coming together as a unit, as a community of sorts. 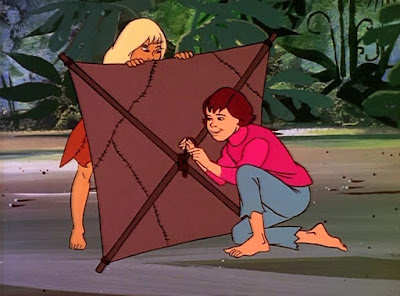 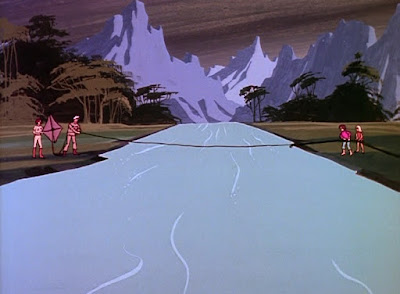 Both plot-lines get developed here. First, the Butlers explain the significance of the first aid kit to Gara and Gorak, who are confused by it. Nobody is sick, so why is it so important to retrieve it?

The Butlers answer that the kit's medicine could prevent future outbreaks of Malaria, like the one that hit the village some time ago.  Gorak and Gara also understand the importance of the medicine when Lok is injured, and he must have it to survive.

Secondly, the plot involves everyone pulling together -- and traversing a deadly, raging river -- to save Lok.  One for all, and all for one.


Finally, in terms of continuity, “To Fly a Kite” makes note that the Butlers have been in the valley for several months, putting a time frame on their adventures so far.