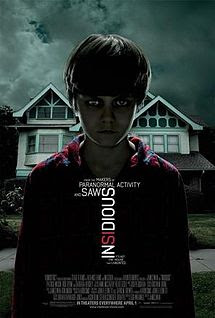 Produced on a budget of under two million dollars, James Wan's Insidious is a horror film that  nicely lives up to its title. The word "insidious" is defined as "proceeding in a gradual way but with harmful outcomes," or, simply, "crafty" and "treacherous."

In very large measure, that definition (and therefore the title itself) explains perfectly how the movie proceeds, both in terms of narrative and vis-a-vis effective film techniques.

Particularly, this horror film's "stealth" villain is one who clearly -- and malevolently -- boasts a plan to achieve a wicked goal.  In making the movie's form echo its content, Wan and writer Whannell work patiently and assiduously, though with abundant twists and turns in the mix, to generate an aura of escalating terror and suspense.

Although Insidious's last act is shockingly and brazenly derivative of Tobe Hooper's Poltergeist (1982) -- right down to the presence of two comedy relief parapsychologists and a female medium -- the movie still largely gets under the skin.

Insidious does so, in large part, without benefit of expensive special effects, instead opting for a patient, slow-build approach.  Insidious then climbs to a highly disturbing climax -- and as much as I felt that the movie's slavish copying of the Poltergeist aesthetic was distracting -- Wan's film nonetheless achieved its "insidious" goal: it successfully troubled my mind, and even my slumber.  The night I watched this motion picture, I felt deeply unsettled and anxious.  Despite the life force it clearly appropriates from Hooper's classic supernatural thriller, Insidious still terrifies.

Insidious dramatizes the frightening story of the Lamberts. As the film begins, this harried middle class family has moved into a new home, and almost immediately, the audience detects that something is deeply amiss.

Books fall off the bookshelf of their own volition, and at night strange noises waken the family.  Then, young Dalton (Ty Simpkins) is injured in the attic and falls into an inexplicable coma.

His concerned parents, Renai (Rose Byrne) and Josh (Patrick Wilson) struggle to deal with this tragedy, but the night terrors don't cease.  Fearing the home is haunted, the family moves to another home...only to see the strange incidents resume. 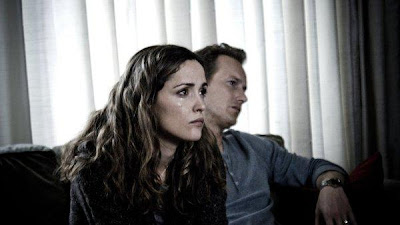 Then, one day, Josh's mother, Lorraine (Barbara Hershey) shows up and reveals that she knows the reasons behind Dalton's coma and also the strange phenomena.  She brings in a parapsychologist, Elise (Lin Shaye) who reveals that Dalton and Josh are both -- unwittingly -- accomplished "travelers."  In other words, during sleep hey can "astral project" out of their bodies.

However, during these out of body experiences, there's always a risk of traveling too far, and getting lost.

That's precisely what has happened to Dalton.  He has trespassed into "the Further," a world beyond our own and populated by the tortured souls of the dead.  And a dark figure there -- one who once sought to control Josh -- now seeks to control Dalton, and to appropriate his body.

Desperate to save his son, Josh risks an astral projection to retrieve Dalton...

Insidious quickly proves itself an interesting blend of popular horror sub-genres.  For instance, the film commences as if a traditional haunted house movie, with strange phenomena roiling a busy suburban family.

Intriguingly -- and perhaps as a reflection of the hard times the middle class is now facing in America -- there's no "honeymoon" period here in the new house.  In most haunted house films, there's an early period of "euphoria" for the tenants in the new home before the terror begins.

Here, scenes of domestic pandemonium occur virtually immediately, inter-cut with scenes of growing supernatural pandemonium.  The impression is of a family overcome from all sides.  Early on Renai complains to Josh about their marriage/life and says "I just want things to be different in this house," suggesting a troubled history.  "I'm scared nothing is going to change," she admits. 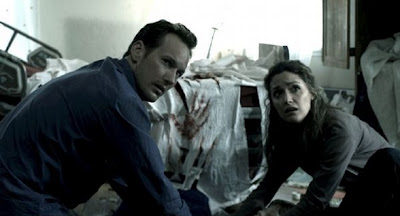 In raising but not overtly exploring this troubled background, Insidious begins from almost frame one to suggest a amorphous anxiety plaguing the Lamberts; a kind of siege mentality hovering over them like a gray cloud.

"I feel like the universe is just trying to see how far I bend before I break," states one of the characters, and again, that's a sentiment that a squeezed middle class -- dealing with foreclosures and unemployment -- can largely sympathize with.  In a country where families can't hold onto their houses or their jobs, Insidious suggest that malevolent forces are after even our bodies.

After the "haunting"-styled first act of Insidious, the film then shifts to a "possession"-type horror film, raising the dread that Dalton has been possessed by a demon or other supernatural creature.

Again, this set-up is undercut when we learn that he is not possessed at all...simply gone to "The Further."  And it is here, in this final reckoning that the Insidiou, disappoints by almost mindlessly, grieviously aping every aspect of the Poltergeist screenplay.

There, as you may recall, Dr. Lesh (Beatrice Straight) and Tangina (Zelda Rubinstein) helped the Freeling family to recover its missing youngest child, Carol Anne (Heather O'Rourke) from a hostile spiritual realm where she was being kept by an evil, avaricious spirit.  After explaining that realm in riveting detail, the parapsychologist and medium then sent the matriarch of the family, Diane (Jobeth Williams) to retrieve Carol Anne.

In Insidious,  Elise plays the roles of Lesh and Tangina and provides all the necessary exposition about "The Further," and then sends family patriarch, Josh, off to retrieve his son.  It's so obvious and derivative a formula (down to the selection of shots in some cases...) that you get the feeling Insidious took the Poltergeist script and just performed a find and replace for character names and supernatural concepts.

Again, I can't be too blunt about this aspect of the film.  If you go back and watch the Lesh scene in Poltergeist and then the Elise scene in Insidious, you'll see for yourself just how uncomfortably close these moments truly are.

In Hollywood, of course, this isn't "copying," it's called homage. And in point of fact, the filmmakers could probably erect a good defense on such grounds.  For instance, Barbara Hershey appears in the film as a woman also targeted by supernatural forces, and this role clearly harks back to The Entity (1983), another great supernatural thriller that starred Hershey.

Similarly, Elise's last name is "Rainier," a selection that suggest the original, true-life case upon which Blatty's The Exorcist (1973) is based.  In particular, a boy in 1949, living in Mount Rainier, was believed to be possessed by a demon.

Despite such reflexive touches, one still wishes Insidious could have found a way to dramatize its tale without so overtly aping Poltergeist's last act.

Given this creative dilemma, why does Insidious work so well, overall?

Well, for one thing, the depiction of "The Further" is very well-done, and deeply unsettling.  There, lost souls wander the firmament and relive distorted, surreal "memories" of their lives. The characters you see dwelling in "The Further" are eminently creepy and disturbing.   Furthermore, the film's stealth villain, an Old Crone, is deeply, monstrously frightening.  The film builds to a terrifying crescendo as the specifics of her "plan" fall into place, one rung at a time, and we detect how easily the Lamberts have been led astray.

In other words, Insidious really creeps up on you, not truly revealing the villain's hand until the last act.  And that villain -- I will confess -- is very effective.

As much as my intellect had some deep reservations about the film, particularly the deeply nihilistic ending, my senses responded to Insidious precisely as the director wished.  I was deeply unsettled, and actually had trouble sleeping at night.   That's a nice sweet spot for any horror film to occupy. Perhaps I felt so unsettled because the film's final twist -- so dark and hopeless -- mirrors, again, the feelings of many of Americans about the future right now. What malevolent forces are working against us while we're occupied trying to get the kids to school safely, or focusing on our careers?

Poltergeist knew "what scares us" back in 1982, and Insidious updates that dynamic well enough for today.  How far can we bend before we break?  Does an angry, avaricious universe want to know the answer?
at January 30, 2014

Email ThisBlogThis!Share to TwitterShare to FacebookShare to Pinterest
Labels: cult-movie review, From the Archive 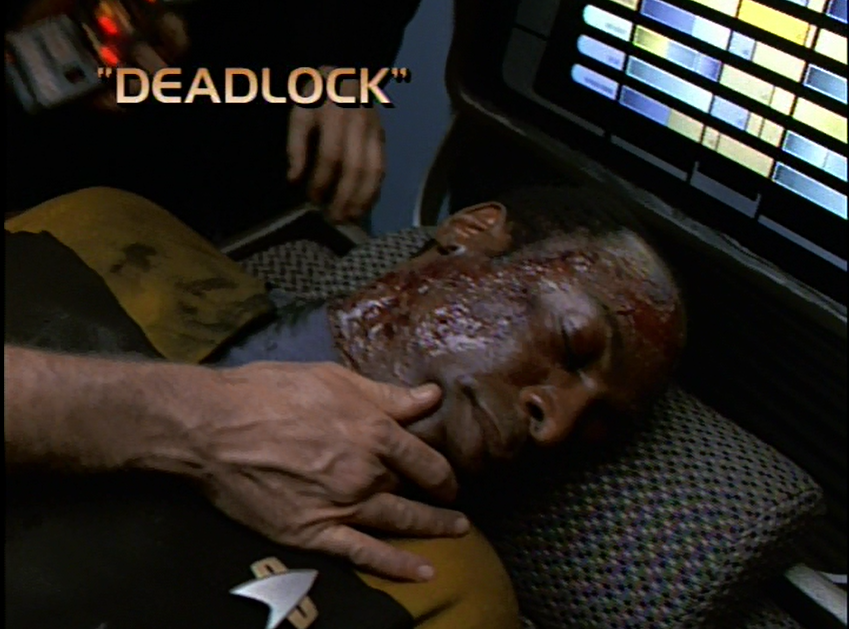