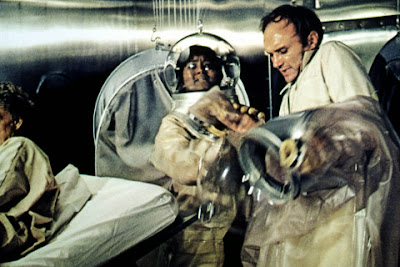 My friend and regular reader Bruce Nims provides us the first list of Friday afternoon.

He writes: "Another great topic.  Here is my humble list and as always, not in any particular order:"

1.      Andromeda Strain - There are so many good things to say about this movie that I honestly do not know where to start.  But one thing that has always stood out about this movie is how realistic it all feels.  The sets are absolutely compelling and the characters are all very smart people working on a very difficult problem.  It's so rare seeing smart people actually doing smart things instead of the movie just telling us a character is smart and then they proceed to do completely stupid things for the entire movie.  (Not naming names here, but there is a very recent movie that completely falls into this trap.  J  ).  Also fascinating is the time the movie spends on showing the research of the organism (which normally would be the most boring part of any narrative like this) and do it in a completely compelling and surprisingly exciting way.  (I was pre-med before I switched careers and worked in a research facility and this movie is one the reasons why I originally choose that path).  I still get chills when the probe video camera zeros in on Andromeda (the organism) and you see it start to grow.

2.      Alien – One of the best Sci-fi movies of any decade period.  About as close to a perfect movie as you can get in my humble opinion.  Just one of the rare movies where everything came together and the whole greatly exceeded the sum of its parts.  Amazing sets.  Amazing creature design.  Amazing score.  Amazing special effects.  Amazing acting.  Amazing directing.  And many, many, many layers of Sci-fi themes in this movie all working seamlessly together.  Man against the unknown.  Man against technology.  Man against the faceless bureaucracy.  How small and insignificant man truly is in the universe.  There is a reason why this movie still resonates all these years later.

3.      Star Wars – I know a bunch of people say this isn't a "real" science fiction movie (whatever the hell that means) but that is complete bunk.  This was one of the first "gritty" sci-fi movies (something I think has been forgotten) and because of that, had a very realistic and lived in look that pretty much everyone else has been copying to this day (except for the Star Wars prequels for some odd reason).  Everything was dirty and lived in (except for the death star, but that was a brand new space station).  This movie confidently showed you its world and it felt real and more importantly, you felt that there was a whole universe beyond the scope of the movie.  (In fact, this illustrates one of the major problems with the prequels.  The prequels continued to return over and over again to the same locations (and characters!) of the original and thus made the universe feel smaller.)  Plus you had an epic story of good versus evil, following the classic hero's journey from farm hand to savior of the kingdom (err planet).

5.      Star Trek:  The Motion Picture -- I know this movie gets a lot of hate but it's completely unwarranted in my opinion.  This movie is the closest in spirit to the original television series but on a much grander scale.  The production design and special effects are gorgeous (though the effects are showing their age).  Lots of good character development (and I mean lots).  Another movie that has many layers and a lot to discuss once you get past the visuals.

6.      Close Encounters of the Third Kind – One of Spielberg's best movies in my opinion.  For most of its running time Spielberg keeps a careful balance between mystery, drama, humor and legitimate scares and then ends on a surprisingly uplifting note.  Additionally, the movie benefits from having an epic feel.  The
spaceship design of the aliens was also a high point of the film.

7.      Westworld – A GREATLY underappreciated gem of a movie.  This movie was the original Terminator (before James Cameron expanded upon that idea).  Much like the Andromeda Strain the movie spends a lot of time looking at the detailed aspects of the technology (in this case a futuristic amusement park).  I'm a sucker for technology getting away from its creators and I think this is one of the best versions of the theme.

8.      Phase IV – This is an odd movie in a lot of ways.  Sometimes I think its complete genius and sometimes I think it's just too odd for its own good (especially the ending).  However, one thing I can say without reservation is that this movie is very unsettling.  Man with a complete arsenal of the latest technology is helpless against a horde of highly intelligent ants.  Yes I said ants.  However, this movie elevates this seemingly insignificant threat into something to be completely feared through some incredibly ingenious filming of actual ants doing some pretty incredible things.  Basically it’s a siege movie, but it a siege movie where the enemy is using its intelligence against you instead of brute force.  And what a scary intelligence it is.

9.      Rollerball – A great movie about the perils of televised violence and the manipulation of media to influence and/or subjugate a population.  Like Death Race 2000, this movie was way ahead of its time and foresaw the rise if reality TV.

10.  Mad Max – At the time it was considered one of the most violent movies and was shockingly controversial.  Watching it now I think most people will wonder what all the fuss is about, but that doesn't change the fact that it’s a visceral thrill ride.

Bruce: A fantastic list, and I'm glad to see more votes for Phase IV (1974) and Star Trek: The Motion Picture (1979).  In terms of the former, I love your description regarding the seeming insignificance of the ants versus the power they actually wield.  In terms of the latter, I totally agree with you regarding character development for the beloved franchise characters.