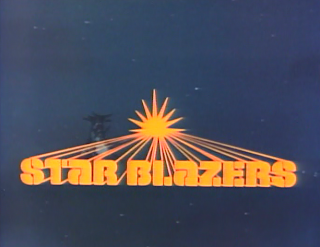 In this week's installment of Star Blazers (1979), the Argo nears the mid-point of its long journey when it encounters a mysterious object in space.  This strange space vessel causes Sandor's fighter to break-up, but fortunately he bails out and survives.  He reports to Captain Avatar that his plane "shook itself apart."

The Star Force soon realizes it is dealing with another Gamilon threat: a "space fortress" that can pursue them and which emanates deadly "magnetron waves."   These waves are powerful enough to destroy the Argo, or even damage it upon entry into space warp, and so the enemy ship must be destroyed.

To that end, Wildstar and Sandor board the living space fortress and attempt to destroy the organic ship.

While navigating its weird passages, Sandor tells Derek a story about his brother, Alex, and how Sandor was assigned to repair his ship, the Paladin.  Even today, Sandor feels guilty that he didn't do a good enough job on that work, and that if things had been different, the Paladin and Alex might have survived the Battle of Pluto.

When Sandor and Wildstar become trapped in the control center of the biological space fortress, Sandor reveals that his limbs are bionic -- and therefore removable -- and that he can escape from captivity... 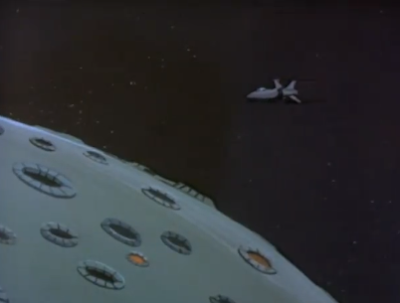 The eighteenth episode of Star Blazers is filled with weird contrivances, and those contrivances manage to undo some of the strong emotions the episode hopes to engender.

For instance, when it is learned that the Gamilon space fortress can shake apart any conventional spaceship, Sandor effortlessly wheels out a pre-existing "seamless" fighter, one with no parts which can be shaken loose by the magnetron waves.

Convenient that such a fighter should exist, and more-so that one would be aboard the Argo, which left Earth in a tearing hurry.

Then, late in the show, Sandor reveals that he is an amputee and can thus escape the wriggling bonds of the space fortress's command center.

Again, Sandor is a character we have known for some time, and yet this information has never been forthcoming.  Instead, the information about his arms and leg arrives at the very moment in which such information is most useful to the plot's resolution.  Even if Sandor's condition had been explained at the start of the episode (maybe when he bailed out of his ruined fighter...), it would not seem so contrived as it does now.

If these contrivances scuttle much of the episode, other aspects are certainly noteworthy.

For instance, I love the organic design of the Gamilon Space Fortress (though it doesn't look like other Gamilon construction....).  At points, it looks like Sandor and Derek are walking through a human digestive system... 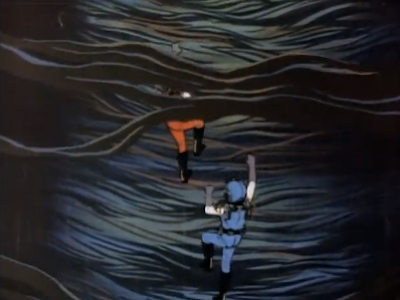 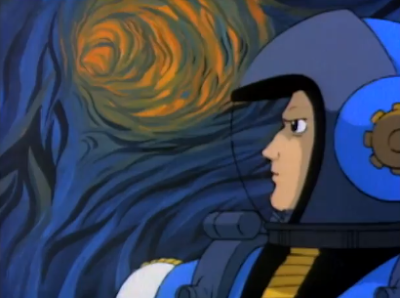 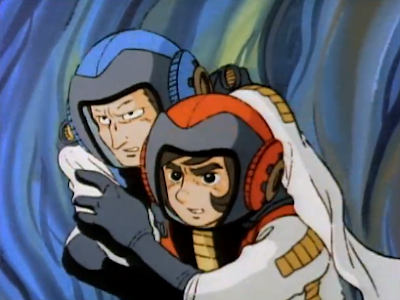 Also, once more, the flashbacks into the characters' past are most welcome.  It's nice to see Alex Wildstar once again, and to get a deeper sense of Sandor as a character.