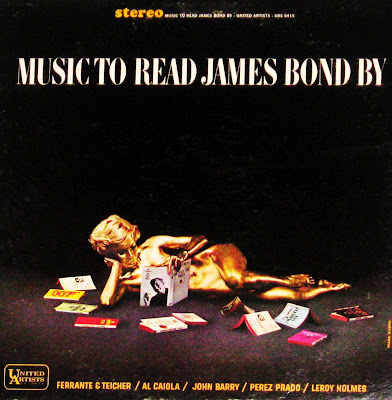 Now,  I present my five selections for my favorite James Bond songs.

And I should say it now: I don’t expect everyone to agree with my taste on this list.

In fact, I suspect this list is largely a result of generational affection and a commentary on the decades in which I grew up, and when I first experienced Agent 007.

Some of this is as much about nostalgia as it is about great music, in other words.

But here are my admittedly sentimental choices.  I don’t think I fully realized until I put my favorites together in one place how much the Roger Moore Era of Bond impacted me.

I know this choice probably gets the purists howling.  A View to a Kill isn’t a great Bond film by any means, and boy does the opening credits sequence (with all the tacky neon…) reek of 1985.  The film’s score by Barry, however, is absolutely terrific and one of the best in the Bond canon since On Her Majesty’s Secret Service in 1969.

As for the title song I was fifteen years old when this film came out, and, yes, a follower of Duran Duran.  This was the first time that I could recall in my personal experience that there was a fusion between a Bond film and popular music.

Of course, that’s not the case historically (as we’ll see as we continue on up the list).

Still, I can’t help but get a kick out of this song.  It feels like it is to the 1980s Bond what Live and Let Die was to the 1970s Bond series: a punch of exhilaration.  But perhaps I needn’t apologize at all, because A View To a Kill remains the only Bond song to hit number one on the Billboard charts, and it was nominated for a Golden Globe award too.

4. “Nobody Does it Better” for The Spy Who Loved Me (1976) composed by Marvin Hamlisch and Carol Sager. Performed by Carly Simon.

Again, I grew up in the Roger Moore era, and remember his films with enormous fondness.  The music in those films, in particular, reminds me of my childhood.  The Spy Who Loved Me was one of the best of Roger Moore’s outings as Bond, and this song is, rightly, synonymous with the film.

In particular, the movie gets off to a fantastic start with the jaw-dropping parachute-jump-off-a-mountain/Union Jack sequence, and then leads right into Carly Simon’s romantic crooning.  There may be three or so better, but in general – okay -- not many songs do it better than this one.

Listeners seem to agree, since “Nobody Does it Better” was nominated as “Best Song” for the Academy Awards in 1976, and the tune remains Carly Simon’s longest lasting placement on the Billboard charts (even longer than “You’re So Vain.”)

3. “For Your Eyes Only” composed by Bill Conti and Michael Leeson. Performed by Sheena Easton.

For all its spectacular action sequences and outer space action, Moonraker (1979) was sort of a spin out of control for the James Bond.  It was one giant step too far, perhaps, though I enjoy aspects of it.  For Your Eyes Only has always felt like the re-grounding of Bond to me, and in a wholly appropriate sense.  It’s a great film, and one of the truly underrated entries in the franchise.  The final sequence with Bond (Moore) rock climbing to reach a mountain-top monastery boasts more suspense than just about any other Bond scene you can name, which is no small feat.

The title song was a phenomenal hit in 1981 when it premiered, and my Mom and Dad were huge Sheena Easton fans after seeing the movie.  The opening credits feature the singer -- nude -- seemingly swimming to the top of frame while she performs.  I was eleven, and this seemed like a BFD.  A naked woman is singing the movie theme song!

If memory serves, Easton is the only Bond singer to actually appear in the title credits of the film (though Madonna cameos in Die Another Day).  Like Carly Simon’s contribution, “For Your Eyes Only” was nominated for a “Best Song” Oscar.

2. “Goldfinger” (1964) composed by Anthony Newley and John Barry, and performed by Shirley Bassey.

There can be no doubt that this is the archetype, the song that paved the way, certainly for the numbers three and four on this list.

Goldfinger gave Shirley Bassey her only top forty hit, and the song has also been inducted into the Grammy Hall of Fame.  Bassey really knocks this one out of the park, and the song has the unusual distinction of being a Bond ballad about the villain, rather than 007.  This one is just a total knock-out.

Bassey returned to record two more title songs, Diamonds are Forever and Moonraker, though neither had the same (colossal) impact as the classic Goldfinger.

1. “Live and Let Die” composed by Paul and Linda McCartney, performed by Paul McCartney and Wings.

It’s a harder-edged tune than some of those that came before, and McCartney’s blazing effort gave the James Bond film series its first nomination for an Academy Award for Best Original Song.  Live and Let Die also rocketed to number #2 on the Billboard Hot 100, and in the early 1990s was memorably covered by Guns’N’Roses.

My very first James Bond album was Live and Let Die, and boy did I play it out.  Again, you get a kind of punch of adrenaline listening to this one, and that’s exactly the right vibe to begin the 1970s and a new incarnation of 007.