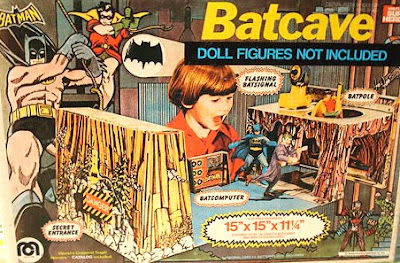 If you loved Batman as a kid in the 1970s, you really loved Mego, the wondrous and storied toy company that produced action figures, vehicles and play sets for the Caped Crusader during that decade.

In 1972, Mego released action figures of the Dynamic Duo -- Batman and Robin -- as part of its impressive World's Greatest Superheroes line.  And in 1974, Batgirl, Catwoman, Joker, the Penguin and the Riddler were added to the catalog.  But that was just the beginning of the good news for would-be Gothamites.

Before long, Mego released the Batcave, a large-scale toy which closely resembles the Planet of the Apes Village Playset in terms of overall structure, but with the detailing you expected of Batman's subterranean lair. 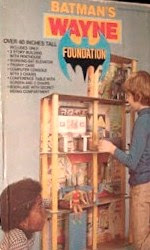 The box described the Batcave toy as "an all-encompassing play case built to accommodate all the bat vehicles.  There is a secret entrance way for the Batmobile, a landing platform for the Batcopter, and a garage area for the Batcycle.  Included in the case are the Batpole and Batcomputer.  Everything necessary to stimulate your child's imagination towards bold new adventures."


Other great Mego Batman toys included the "shiny and sleek" Batmobile -- the TV series design -- for the action figures, plus a Batcycle for "free-wheeling fun."  The Batcopter featured a canopy you could open up, and a rotor you could spin in order to capture "super foes."  Two other vehicles -- which look like Volkswagen vans -- were also released: a Batlab and Joker Mobile.  Both of these are highly-prized items today.


The holy grail of Batman collecting, however, remains Batman's Wayne Foundation Playset, a four-floor Goliath featuring a working elevator, secret compartments, room to park the Batcycle, and more.  The toy was the Batman equivalent of Barbie's famous townhouse, perhaps, and beautifully-detailed.  It features seven good-sized rooms (supported by yellow pillars), a blue Batcomputer, a landing pad for the Batcopter, and a blue conference table and other furniture.   Boy, do I wish I had one of these in my home office...