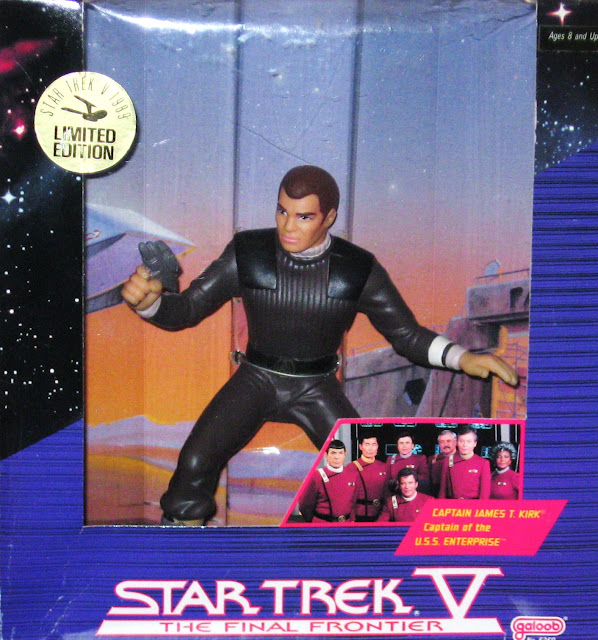 Action figures from the most critically reviled and despised of all Star Trek feature films (well...at least till Nemesis?)  Why not!
Actually, I remember that when Star Trek V: The Final Frontier premiered in the summer of 1989, I was hoping for some great new Star Trek toys.
And I didn't just mean marshmallow dispensers, either. 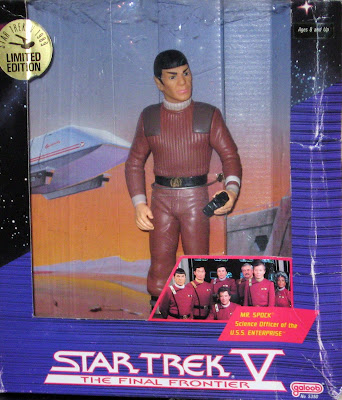 During the late 1980s, Galoob owned the licensing rights to Star Trek, and had already produced a fine line of small Next Generation action figures and even a few ships (including a die-cast Enterprise-D), so it was only natural that the company would celebrate the release of the fifth Star Trek movie with a line of action figures.
These Galoob releases included Captain James T. Kirk ("Captain of the U.S.S. Enterprise"), Mr. Spock ("Science Officer of the U.S.S. Enterprise"), Bones ("Chief Medical Officer..."), Sybok ("Mysterious rebel leader of Nimbus III") and the Klingon Captain Klaa ("Klingon captain in search of battle.")
I would have loved to see the well-muscled Klingon warrior Vixis in the mix too, but it was not to be, alas.
As advertised on the side of each figure box, the Star Trek V: The Final Frontier figures were "numbered, limited edition collectibles," "authorized by Paramount Pictures" and included "display base with scenic backdrop."
Okay, so those features aren't particularly exciting, I admit.

What is kind of cool, however, about these figures is that Kirk and Spock are not depicted wearing their familiar red movie uniforms, but rather the commando outfits actually featured in the film, for their ill-fated raid on Paradise City (where the grass is green and the Romulans are pretty...).

Also, so far as memory serves, this is the avid Trekker collector's only opportunity to own a figure of Sybok, Spock's quasi-apocryphal, emotional half-brother.   Share your pain with me, and gain strength from the sharing... 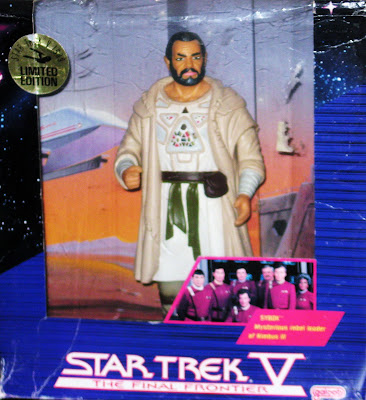 I can't imagine that these limited edition  figures (who have phasers, tricorders and the like molded right into their hands) are much fun to play with.  There is no leg articulation and, in some cases, no arm articulation, either.

Yet, on the other hand, these "limited edition" figures look pretty great on display in my home office.
In a few short years after these figures were released, the Trek license went to Playmates, a company that did an amazing job with the property.  Sadly, no more Final Frontier figures were forthcoming.
And frankly speaking now -- as a Star Trek fan -- wouldn't you want an action figure of...God?
at November 09, 2011

Email ThisBlogThis!Share to TwitterShare to FacebookShare to Pinterest
Labels: 1980s, collectible of the week, Star Trek