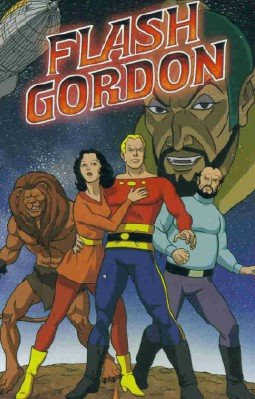 With the first season of Land of the Lost behind me, I shift to another Saturday morning cult tv fixture from my cherished youth, Filmation's animated series from 1980-1981: Flash Gordon!

The Filmation version of the Alex Raymond legend is a bit more naive and straightforward than the campy 1980 movie starring Sam Jones (which I love), but I have great memories of watching this show. In fact, I still own many of the toys from the series, including action figures of Flash, Ming and Dr. Zarkov. I also have (an inflatable...) toy of Flash's rocketship, which is featured in the first episode of the series. Lately, I've had fun flying it around my office.

"A Planet in Peril, Chapter One," by Sam Peeples begins with action, action, action. The planet Mongo is on a collision course with Earth, and Flash Gordon, Dale Arden and Dr. Hans Zarkov have launched into space to discover why. Unfortunately, Ming's warships shoot down their spacecraft, and - in a scene that reminded of me of Planet of the Apes, the rocket spectacularly crashes in a lake on Mongo.

Before long, the Earthlings are captured by Ming's "sea mutants," his fishermen. They have also netted Arborea's Prince Barin (who here has a very nasal voice and is bald...) and Thun, a Lion Man. These captives tell Flash and the others that Ming is "emperor of the universe" and that he maintains his control of Mongo because every race on Mongo is the enemy of every other race on Mongo.

And I thought Ming promised to be a uniter, not a divider...

Although Flash, Zarkov and Dale escape the fishermen, they are soon hunted in the "Dire Marsh" by sexy Princess Aura and her witch woman warriors. They all wear sexy metal bikinis and mount giant ostrich creatures. This is where the episode really picks up...

The episode climaxes as Flash and his buddies are taken to Ming's throne room. Ming forces Thun and Flash into the arena, where they battle a giant "training ball" equipped with lasers. The episode ends on a cliffhanger, and man...I was left wanting more. The episode literally moves at warp speed.
I've always loved the retro-1930s feel of this version of Flash Gordon, whether it be the art-deco design of Mingo City, or the anti-fascism message embedded in the material (and taken straight from the source material). I also really enjoy Filmation's art work, which is often criticized, but I believe rather impressive given the time and budget restraints of the day. This is a fun show, and I can't wait for the next adventure on Mongo.
at August 05, 2006